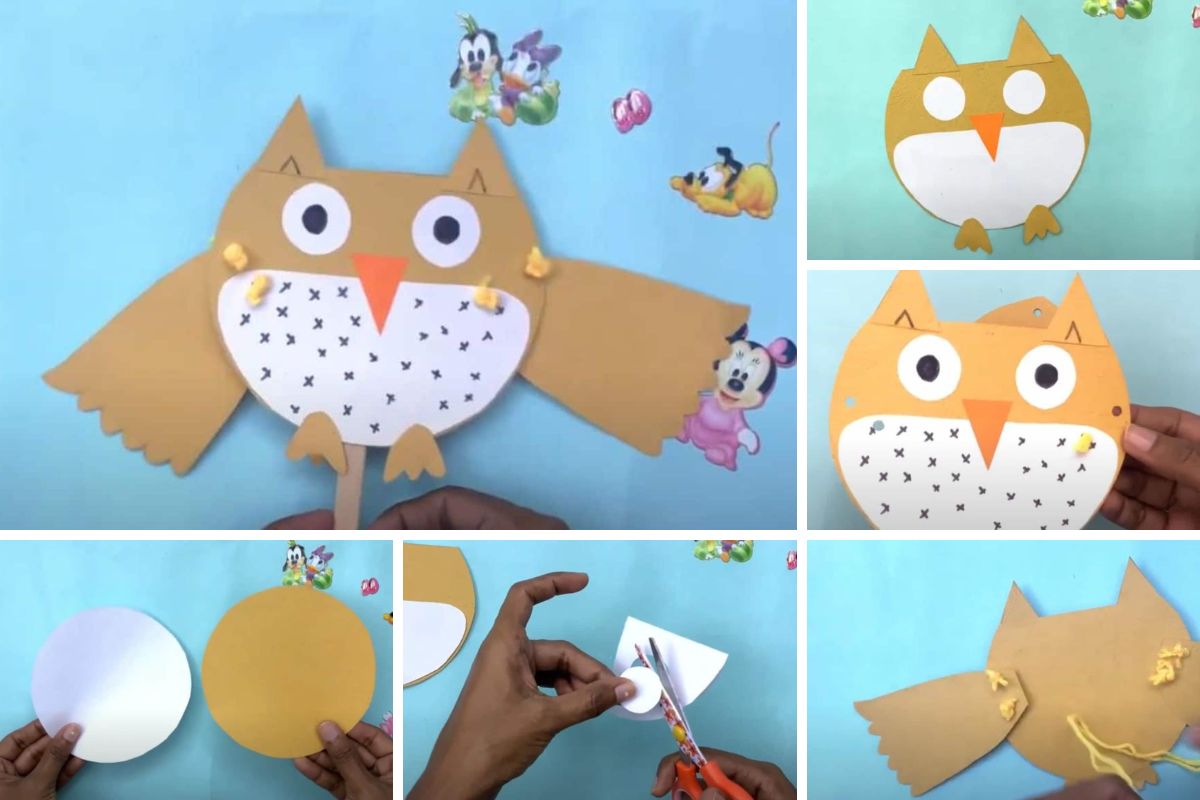 Owls are many people’s favorite animals, and one exciting thing about them is that you can create one with paper crafting! This paper craft allows the owl to have movable wings, making it interactive, which is excellent for children to play with and put on a spectacular puppet show. 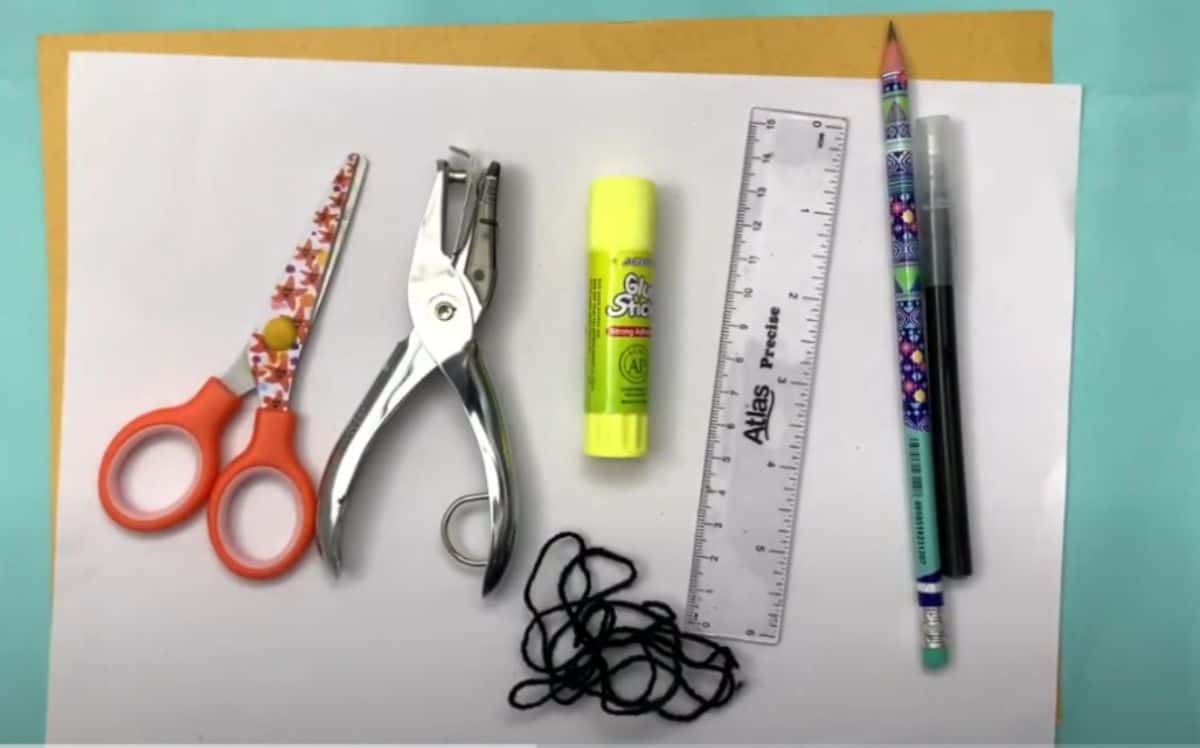 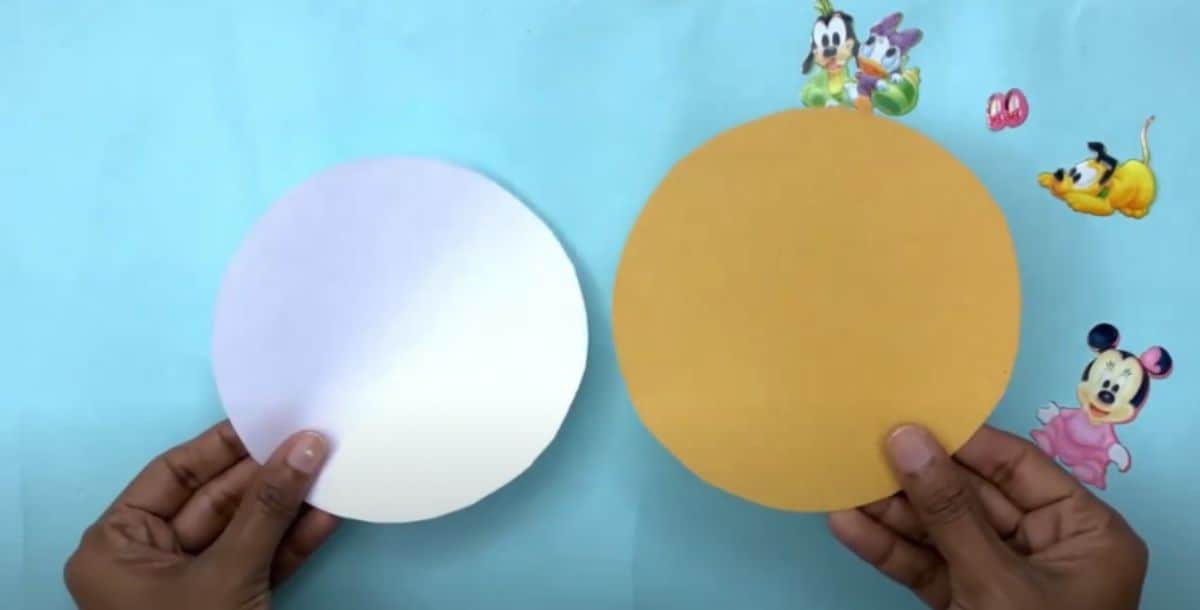 To start, you'll need to use your pencil to draw a circle the size of a quarter of the page on a white piece of paper. Then you'll cut out the circle with a sheet of brown paper underneath to get two equally sized circles. 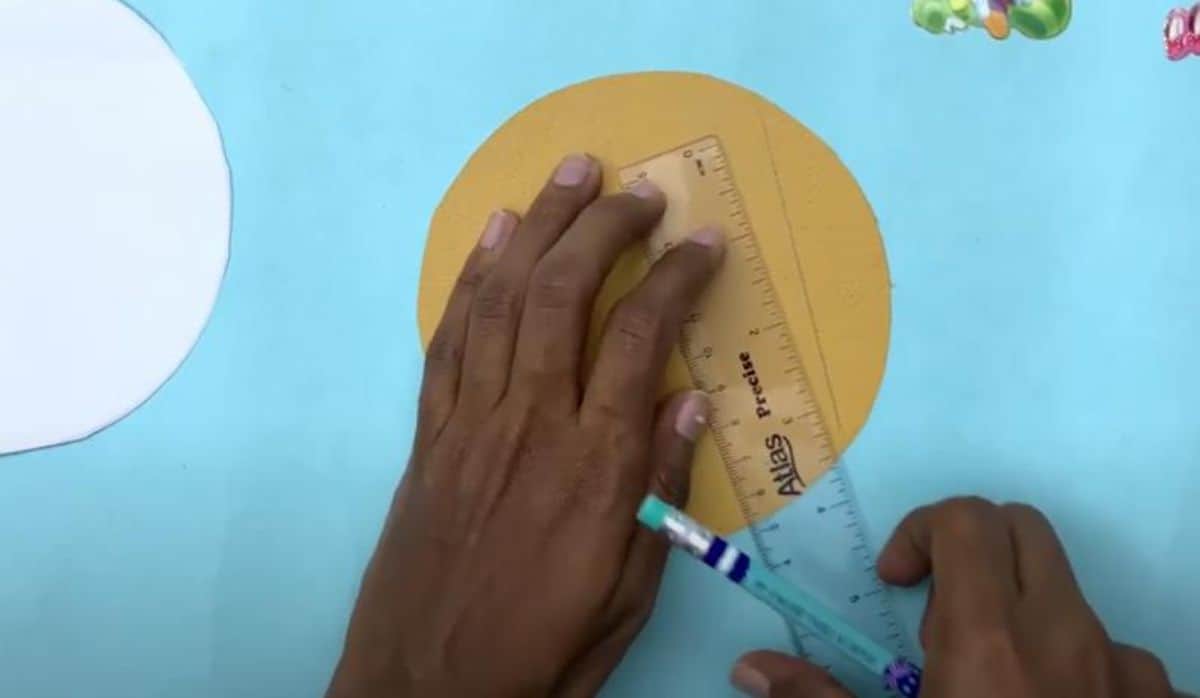 To make the body, draw a line on the top part of the brown circle and cut along it. 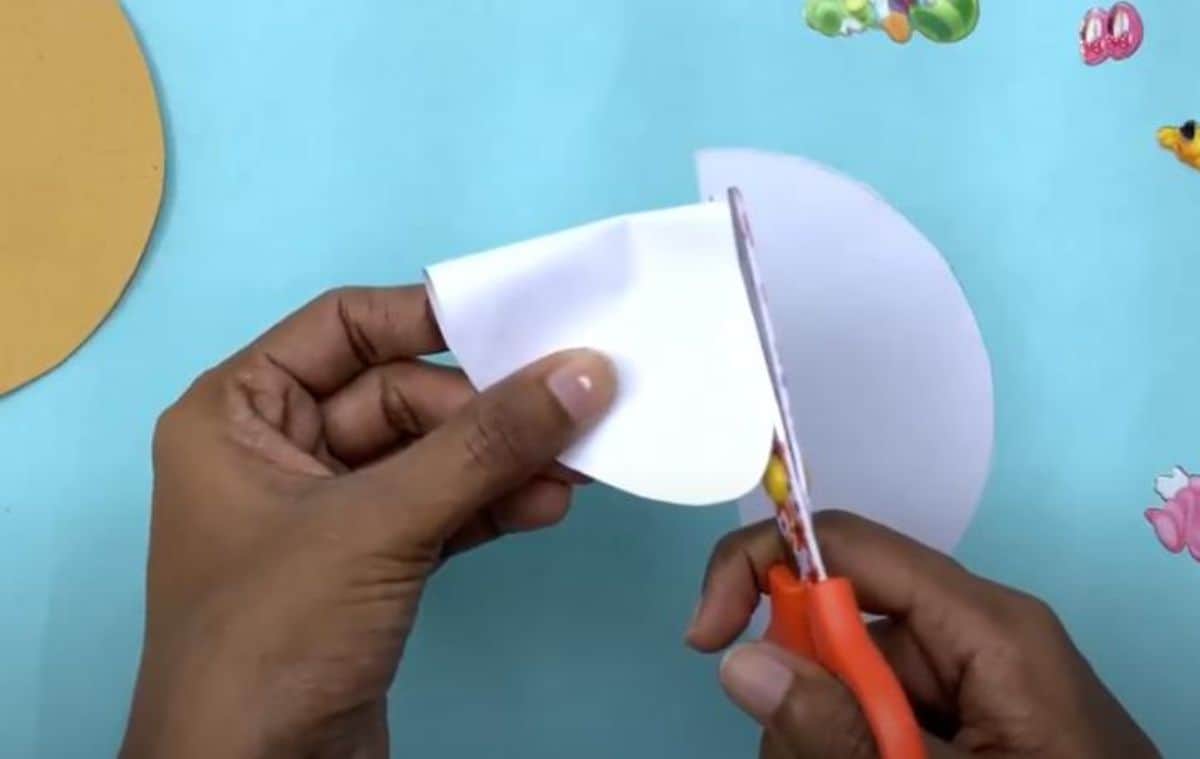 Take the white circle, fold it in half, and cut down the folded line. Then take the halved white circle and snip a curve on the sharp corner.

Once you've cut out the curve, you can place the white paper onto the brown piece and align the bottom arches. You can glue it if you'd like or save all the gluing for a later step.

Use the other half of the white circle and fold it in half again. Then, you'll need to draw a medium-sized circle on it, which you can do with a protractor or free hand. Once that's done, you can cut it out while it's still folded to get two eyes.

To make some happy little owl feet, you'll need to draw one out with a pencil on brown paper. The feet need to be roughly half an inch. You can be original with how you draw them, but for simplicity's sake, you can sketch them as in the photo. Once completed, fold the paper to cut into two feet.

To make the ears, you'll need to use another piece of leftover brown paper and draw a triangle with the ruler. The size of the ears can also be roughly an inch. Fold the paper so you can double the ear cut-out.

Step 6: Glue Everything Together 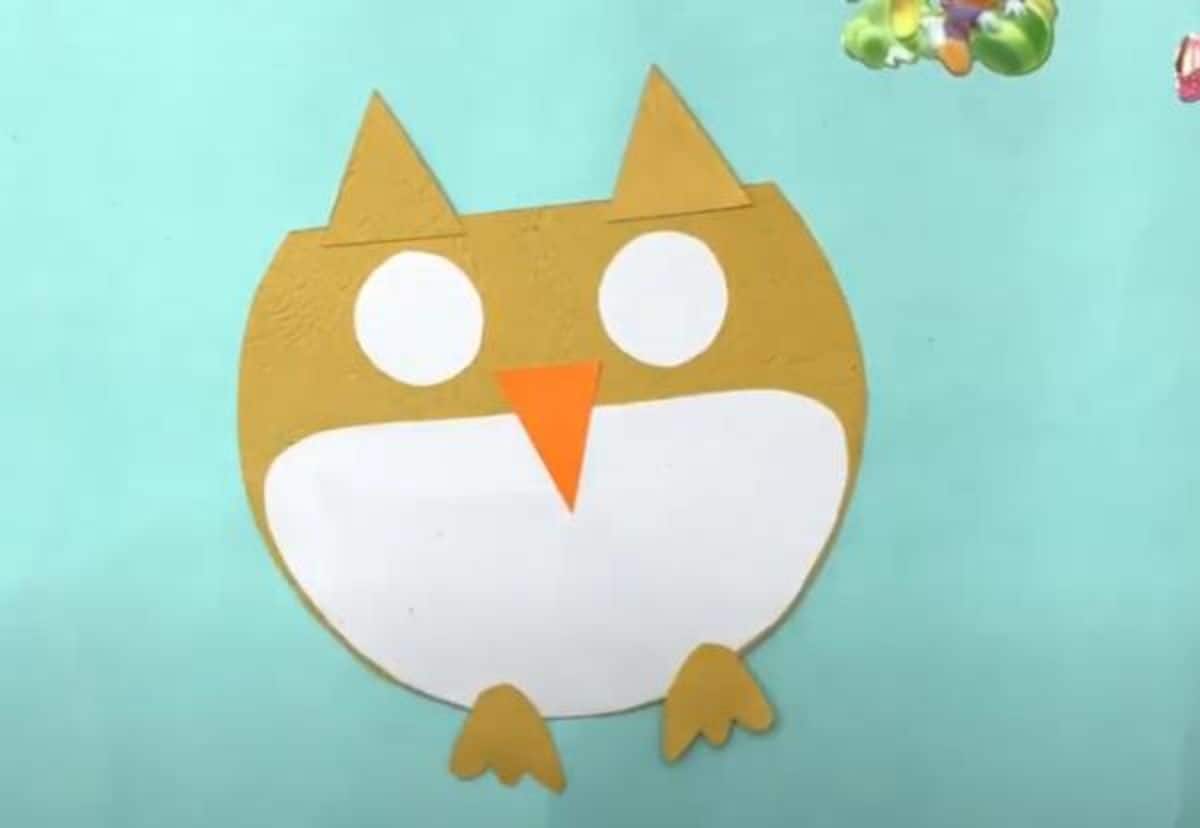 Draw and snip out a triangle from the orange paper. Glue all the cut-out pieces onto the body as mentioned before, starting with the white curved half, then the eyes and beak. After that, glue the feet at the curved bottom part and the ears at the flat top. 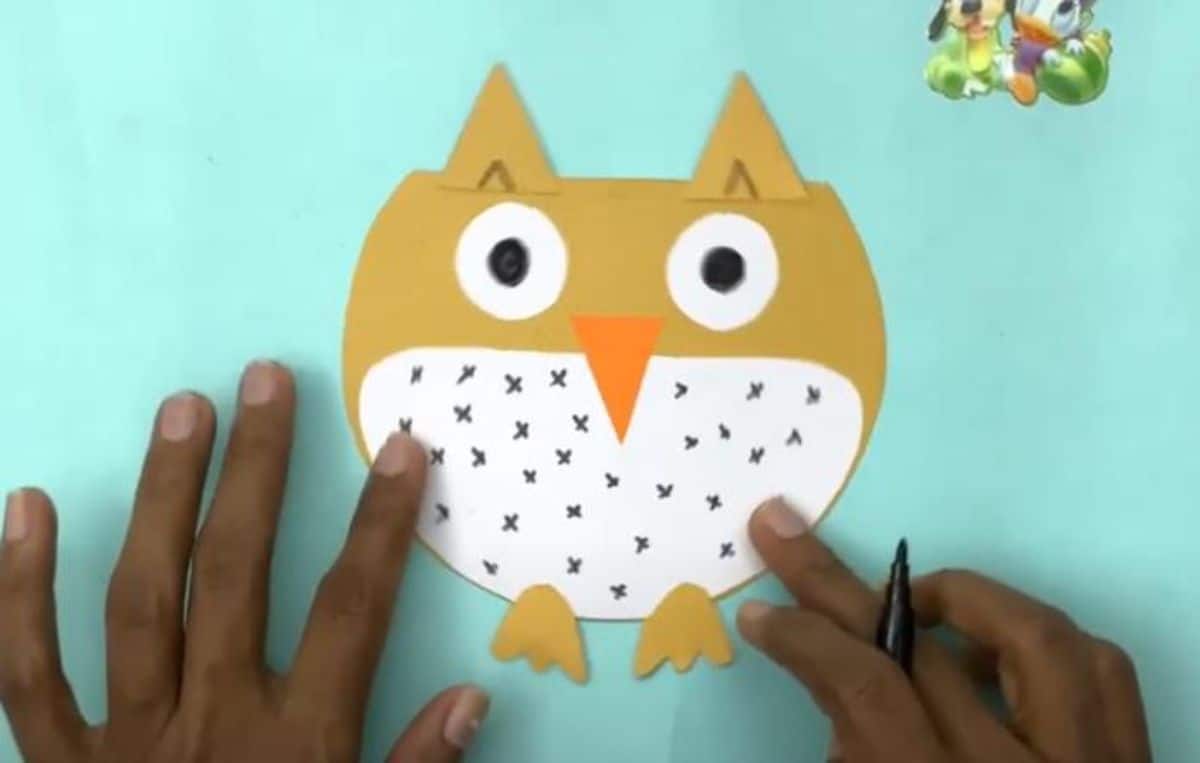 It's time to bring the owl to life! You can get creative to give the owl your artistic spin. Draw black circles on the eyes and smaller triangles on the ears, and decorate the white body section with crosses or whatever you like. 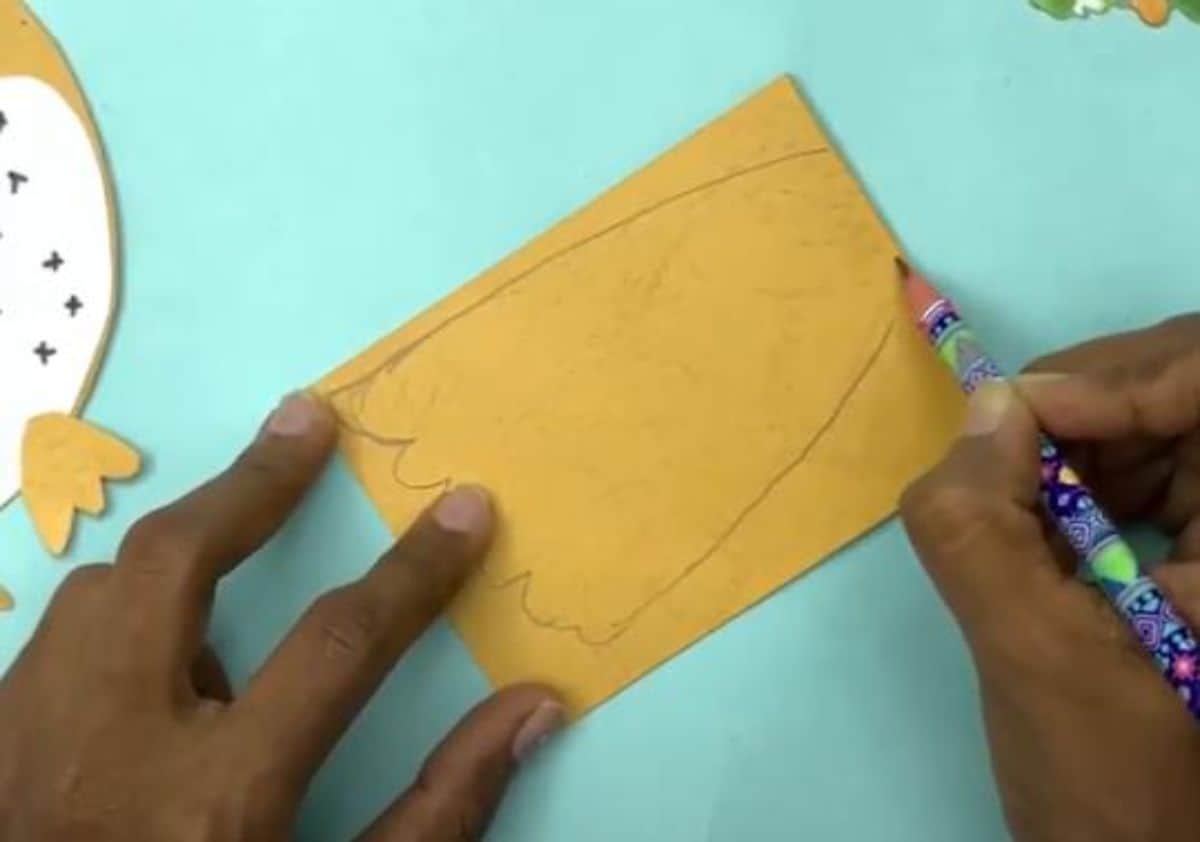 Cut a third of the brown A4 paper, and then fold it in half. Draw an owl's wing and double-cut it on the folded paper. 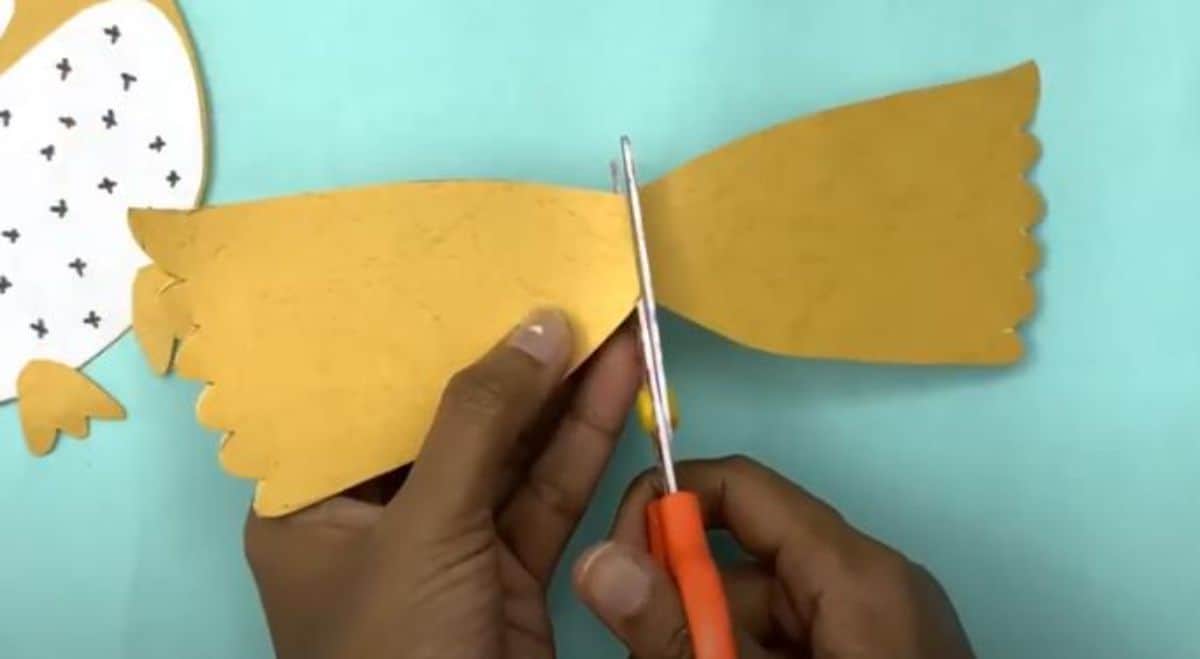 Open the fold and cut it along the fold line to separate the wings. If you don't want to make the owl movable, you can paste the wings on the back at this step.

Step 9: Punch Holes in the Wings and Body 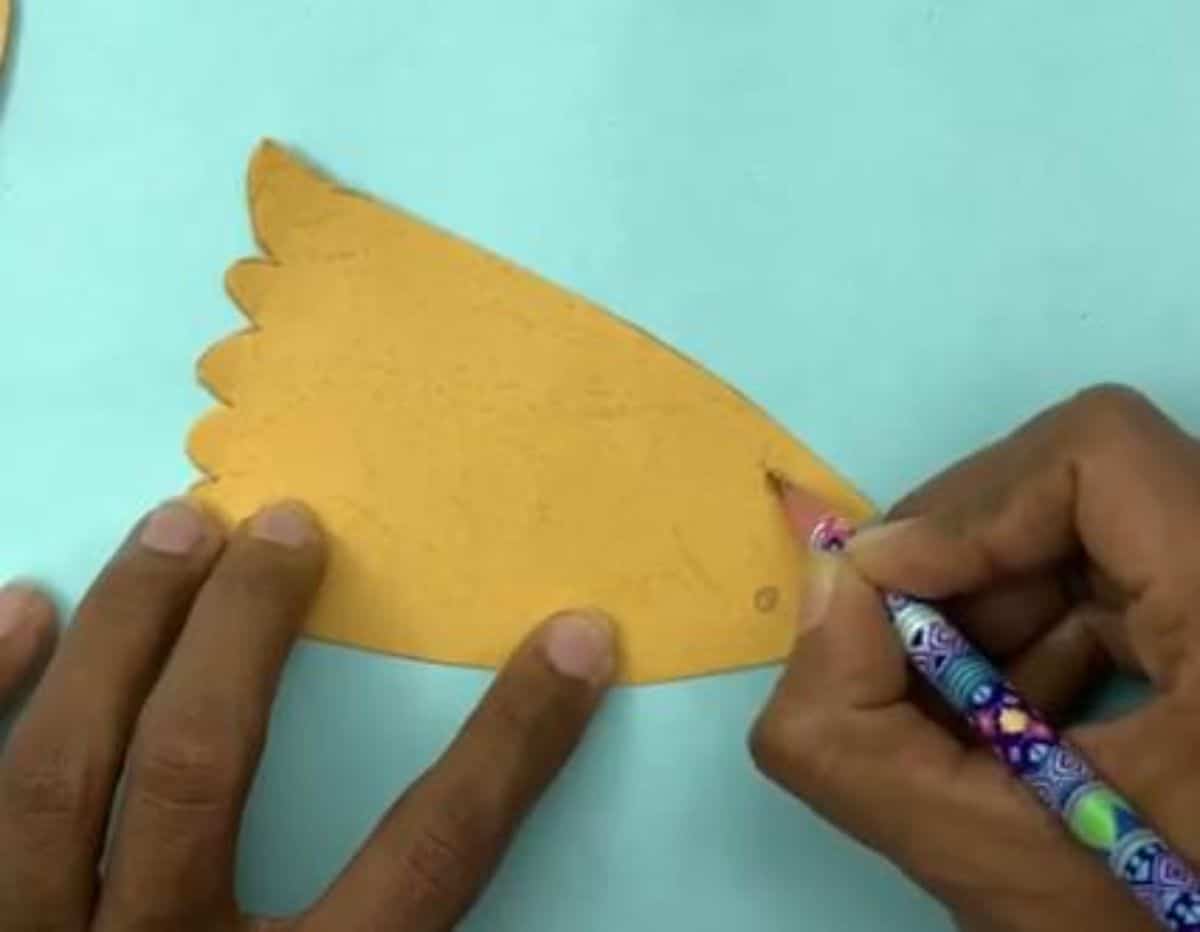 Make two small circles near the edge of the wing, and then use the punch to make a hole in each. 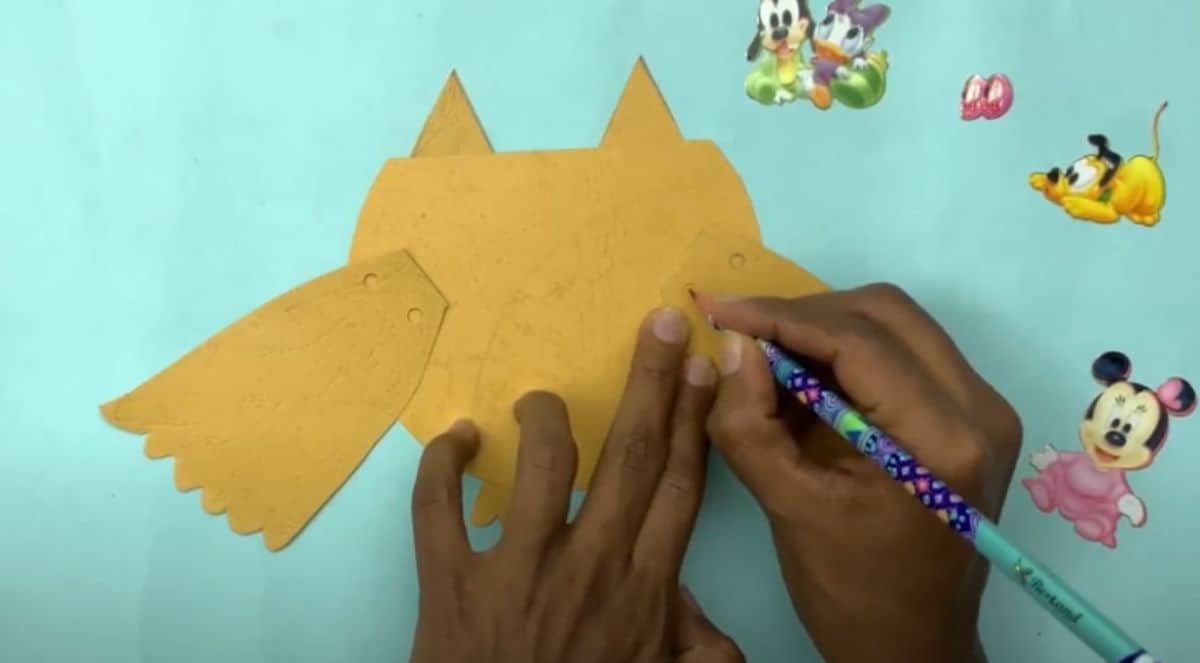 Then turn the owl, so the back is facing you, and place the wing with holes to the side of the body in an outwards position. 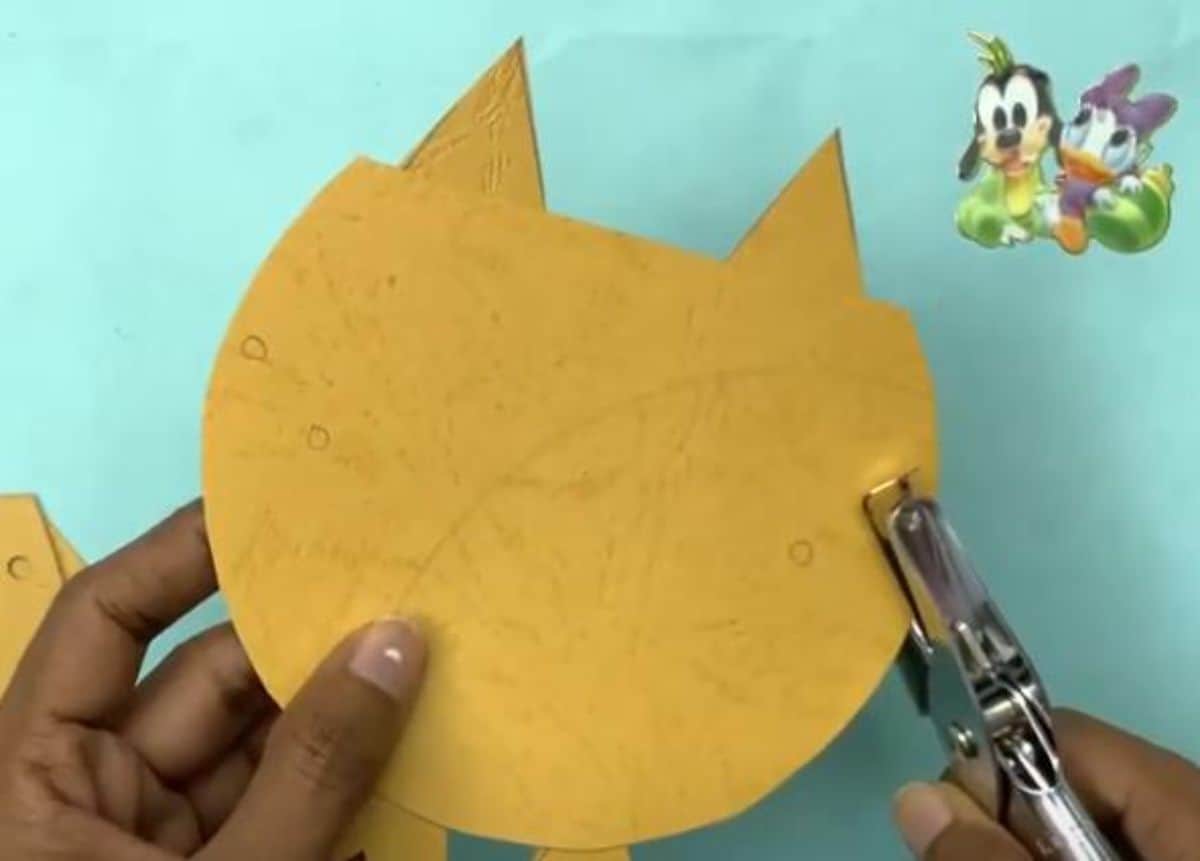 Once you've done that, mark the holes with your pencil on the body through the wings' punched holes. Now you can punch holes on the owl's body where the markings are and repeat the process for the wing on the other side of the body.

Step 10: Thread the Wings Onto the Body With Yarn 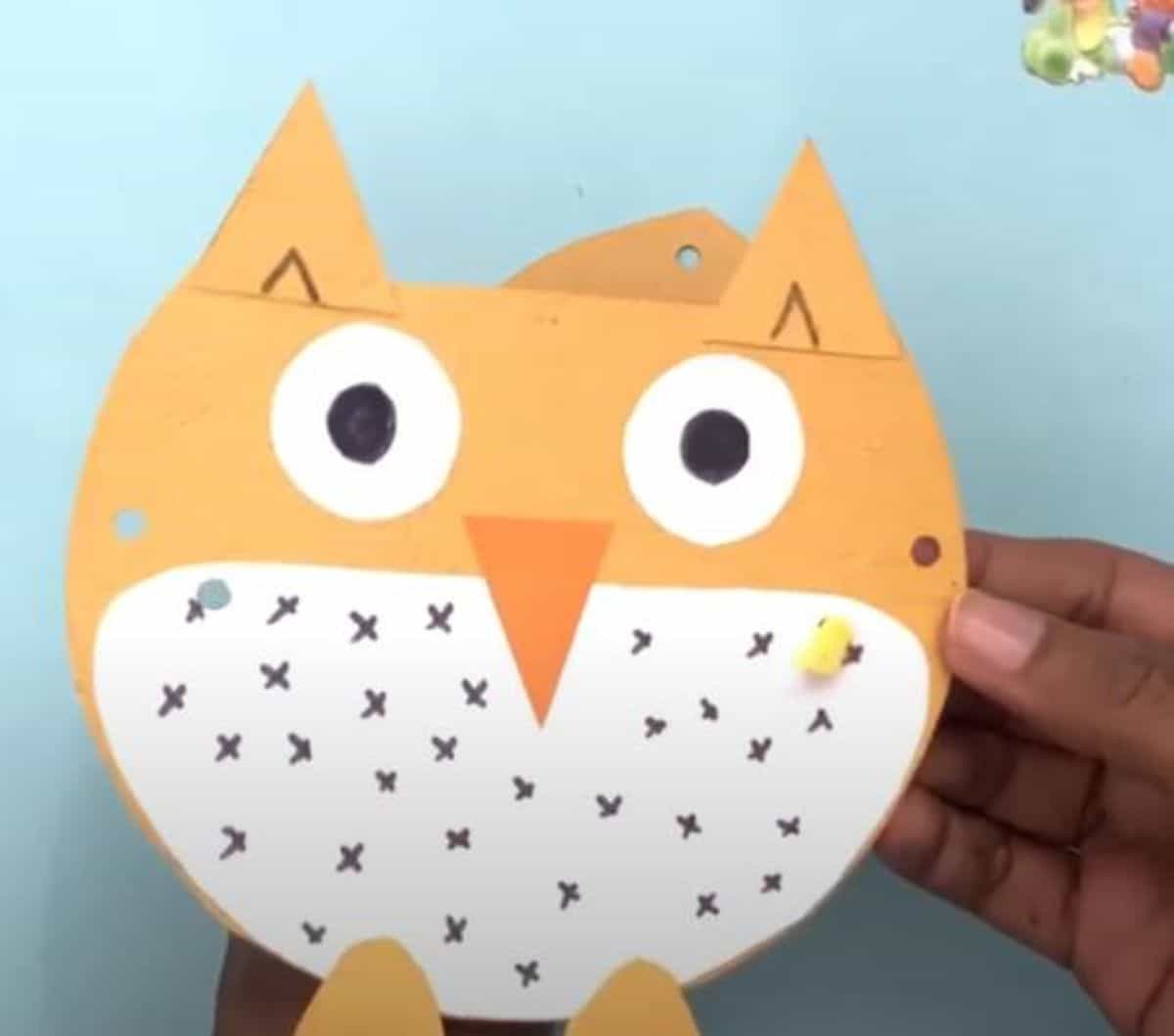 Take a piece of yarn and fold it to create a double thread. Tie a regular knot on one end. On one side of the body, push the string through the owl's body so the knot is on the front side. You can use a knitting needle to help you get the yarn through. 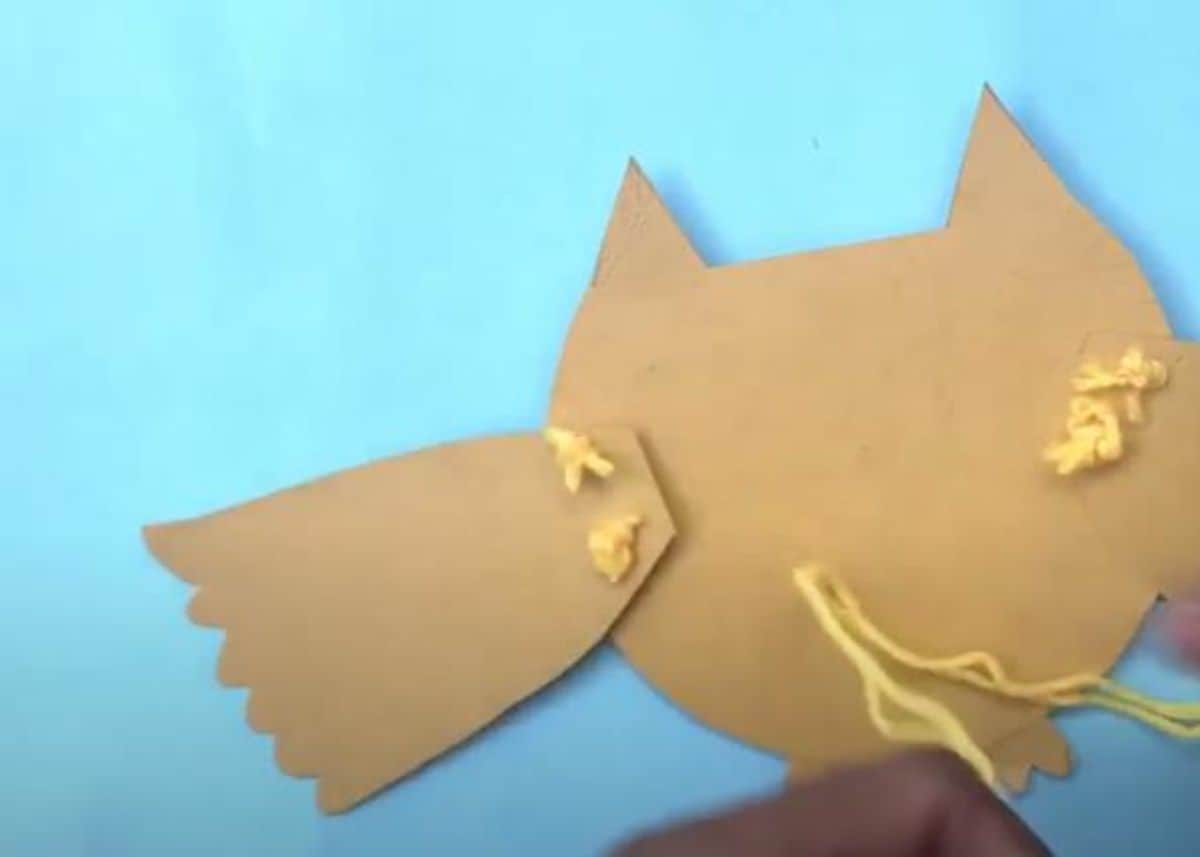 Take the wing, push the yarn through the corresponding hole, and tie another knot so it can still move but isn't too loose. Repeat this with the other hole and do the same with the other wing. 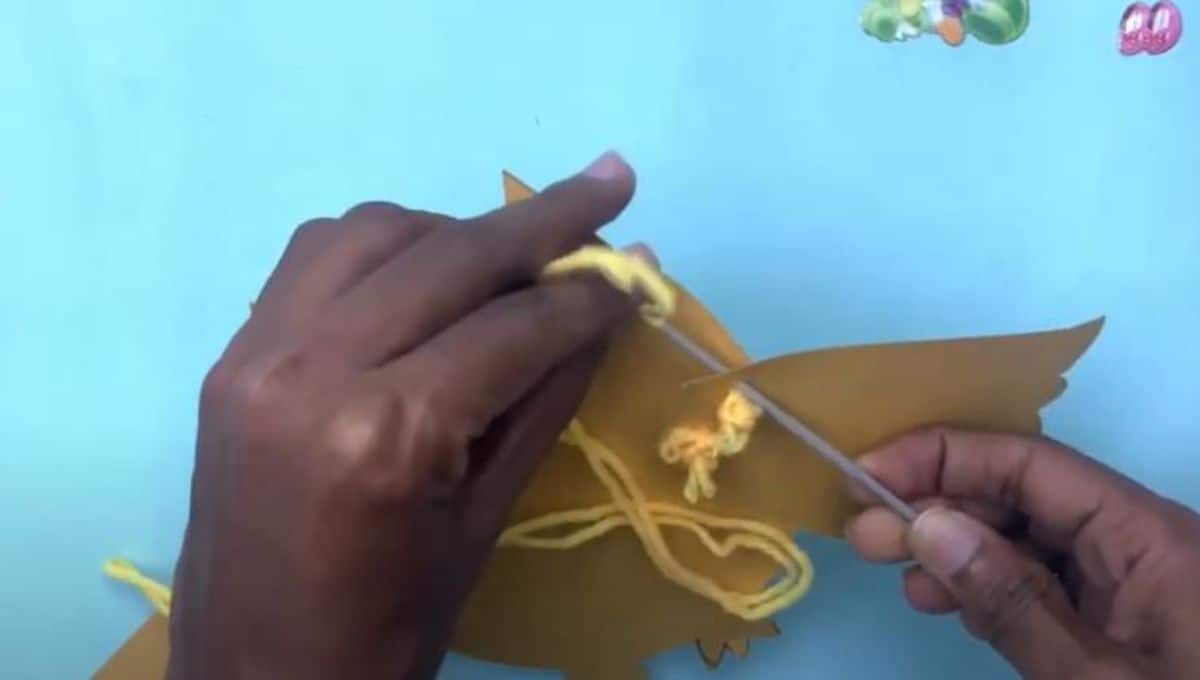 Take a long piece of doubled yarn and use the knitting needle to thread it through the one top wing hole from the back, but the string should only go through the wing hole, not the body hole. 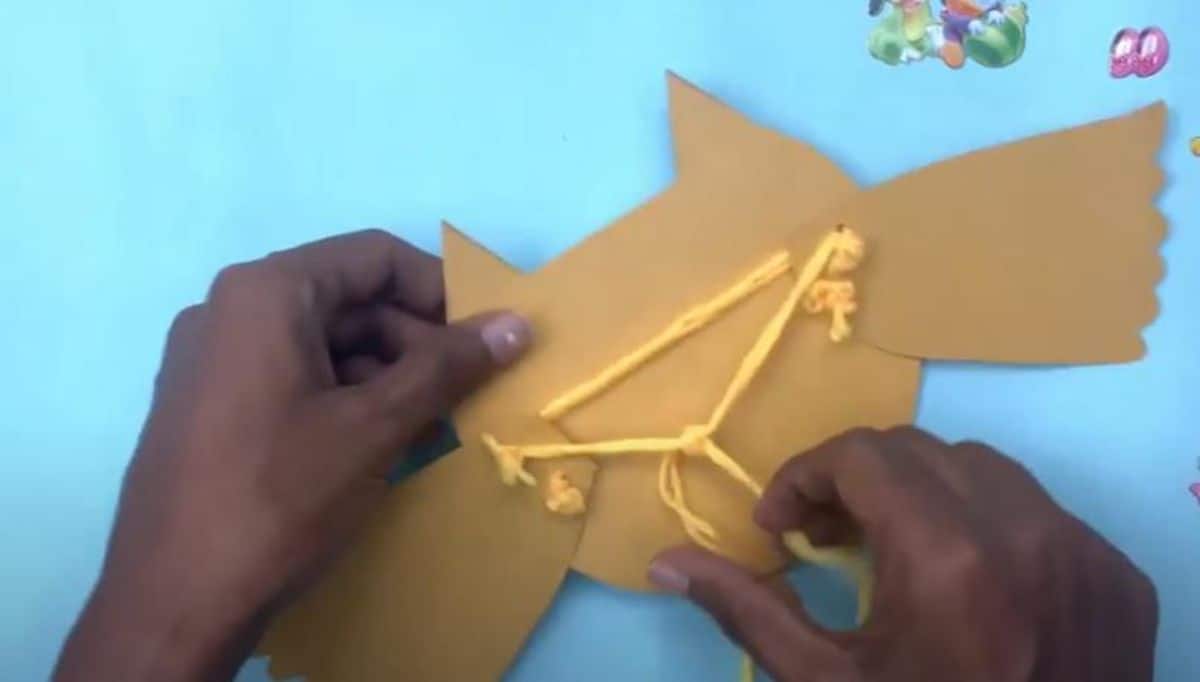 Thread the yarn between the body and wing through the top wing hole on the other side. You can then take the ends of the string and tie a regular knot in the middle of the back. The wings can now move when you pull the string downwards! 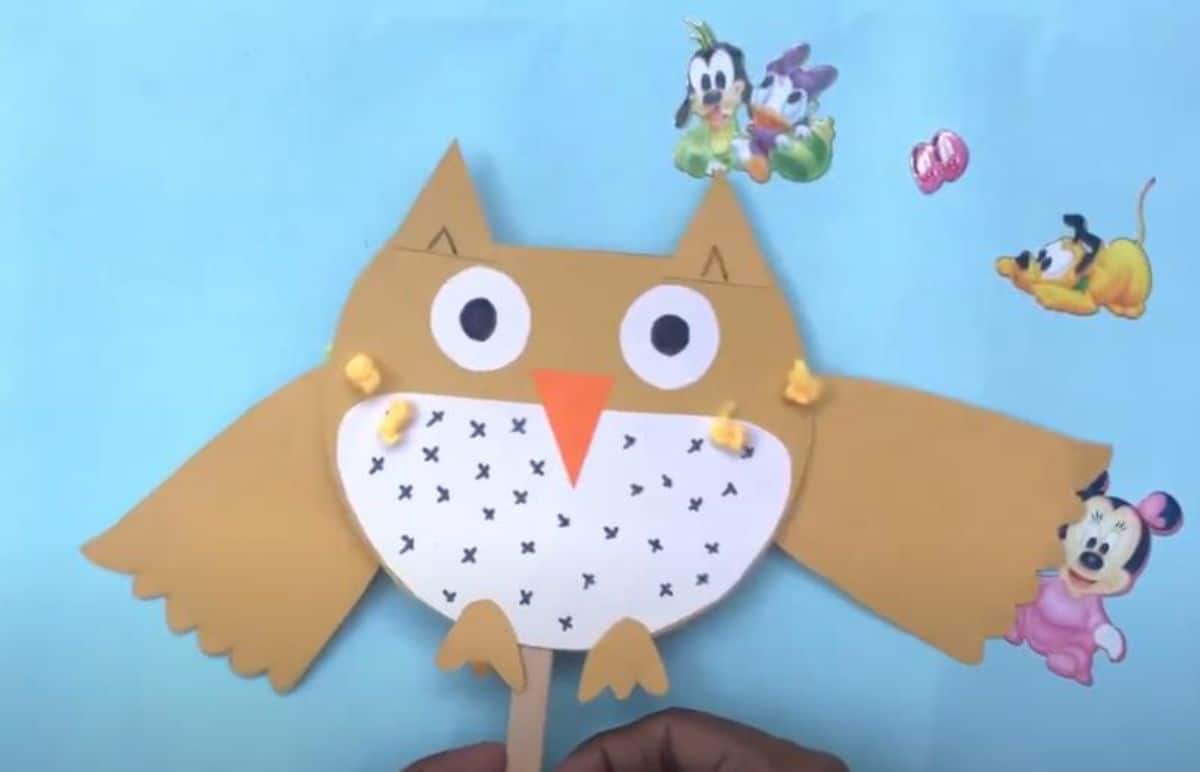 Take your popsicle stick and glue it on the back of the owl at the bottom to make it easier to hold. Once you've done that, your owl is complete and ready for kids to play with!