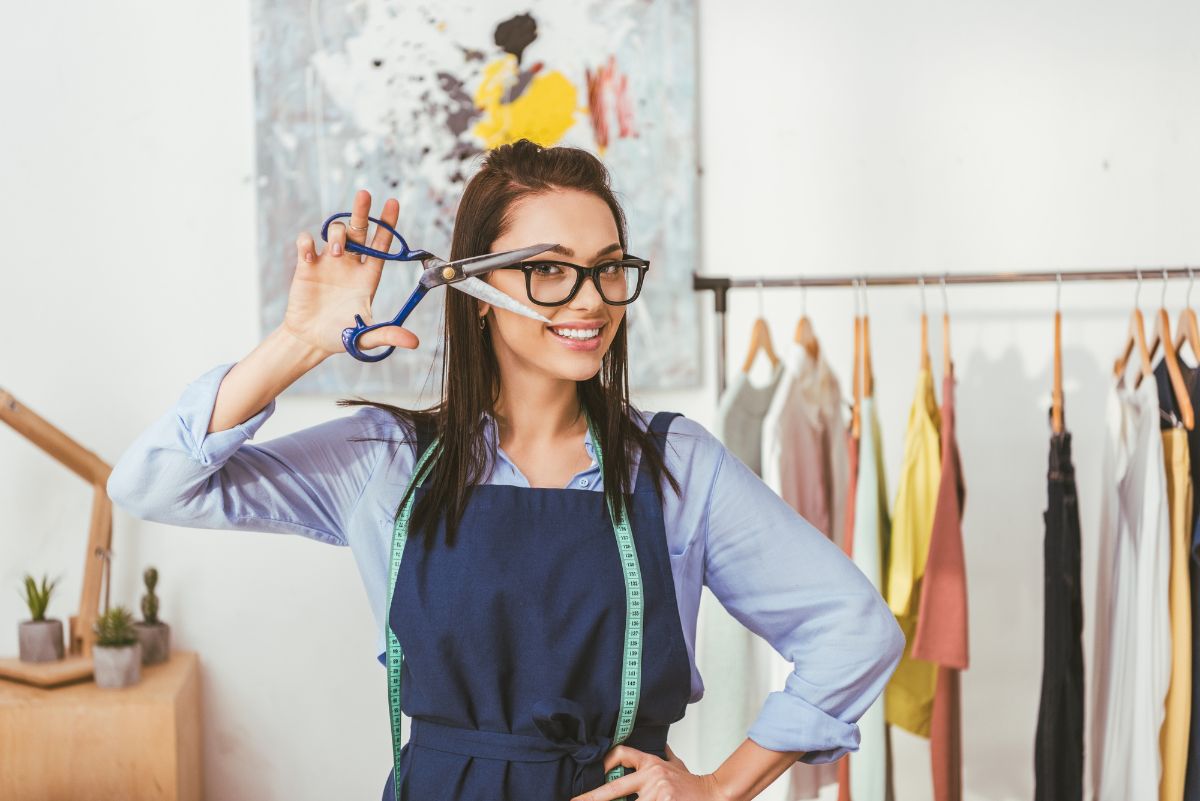 Scissors are two sharp blades that are attached in the middle with a screw. It has two levers that extend out and act as handles. The handles have holes where you can place your fingers. These holes are typically the grip for the scissors. These blades are used to cut hair, cloth, paper, and other materials.

Not all cutting implements look like a version of scissors. For example, sometimes, they only have one blade instead of two. In addition, some scissors have a specific purpose and are constructed for that task, such as bandage scissors. For all the details about scissors and their particular purposes, keep reading to find out more information. 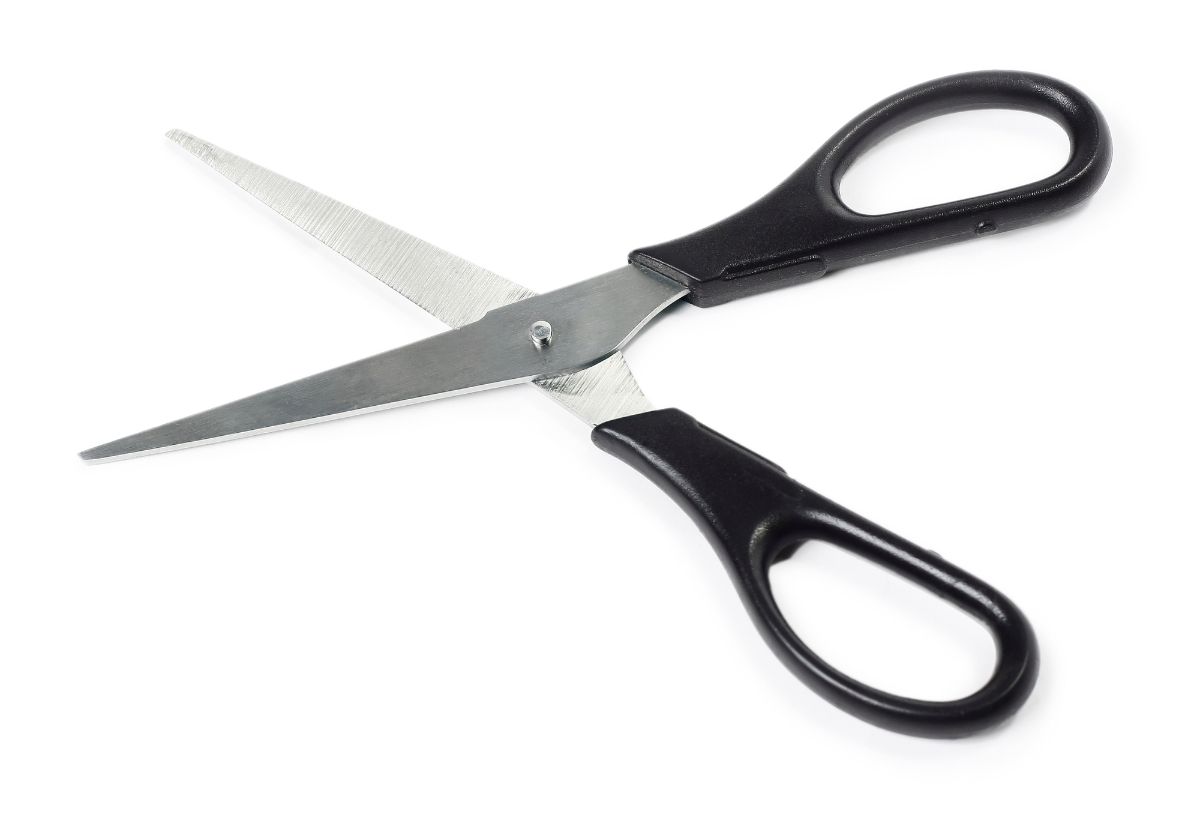 These scissors have blades that rotate instead of moving laterally because of the strong pivots. Ambidextrous scissors typically have the top blade on the right, which is similar to how right-handed scissors are constructed.

See also  How To Craft A Paper Puppet (Craft For Kids)

Appliqué scissors have a unique look to them and are easy to identify because the handles are offset. The blades of applique scissors are shaped like paddles. The paddle blades work to push the bottom layer of fabric while cutting. This allows the cuts to be controlled and manageable along the stitched seam.

Appliqué scissors are intended to trim and cut close to the proximity of the fabric while protecting it, so it does not get damaged in the cutting process. These scissors are used primarily for material that will become appliquéd as well as for rug making.

Bandage scissors have often been called nurse’s scissors. These scissors are small, with two short blades and long handles. The top blade has a blunt edge, and the bottom blade has a sharp and pointed tip.

These types of scissors have been labeled nurse’s scissors because they were used by nurses while practicing medicine. These scissors allow the cutter, or nurse, to cut open a bandage or tape when they slip the scissors under the bandage. While doing this, the scissors do not hurt or cut the skin.

Buttonhole scissors have handles that the blades stick into. The blades connect to the handle with a pivot. This type of scissors has a short blade, is easily adjusted, and is heavy-duty. These scissors are ideal for opening up buttonholes and replacing buttons.

See also  How To Craft A "Heart" Birthday Card (For Kids)

Craft scissors have a long blade with tips that are sharp and pointed. They are intended to cut long, smooth, and straight slices of various materials. They can be used in smaller and tighter areas.

Craft scissors can be used for sewing purposes but most often cut patterns out of paper. They are ideal for wrapping gifts or packaging. Craft scissors are found just about anywhere and are relatively affordable. They are robust and can handle a fair amount of abuse, especially from children.

You are likely to find a number of these types of scissors in a craft room. They can be used for random tasks such as opening paint cans, cutting wires for jewelry, or cutting fresh flowers. They can also cut through clay when needed.

When using craft scissors, you should check the blades to see if they are no longer straight or leave ragged marks on the items you are cutting. When this begins to happen, it is time to replace them. 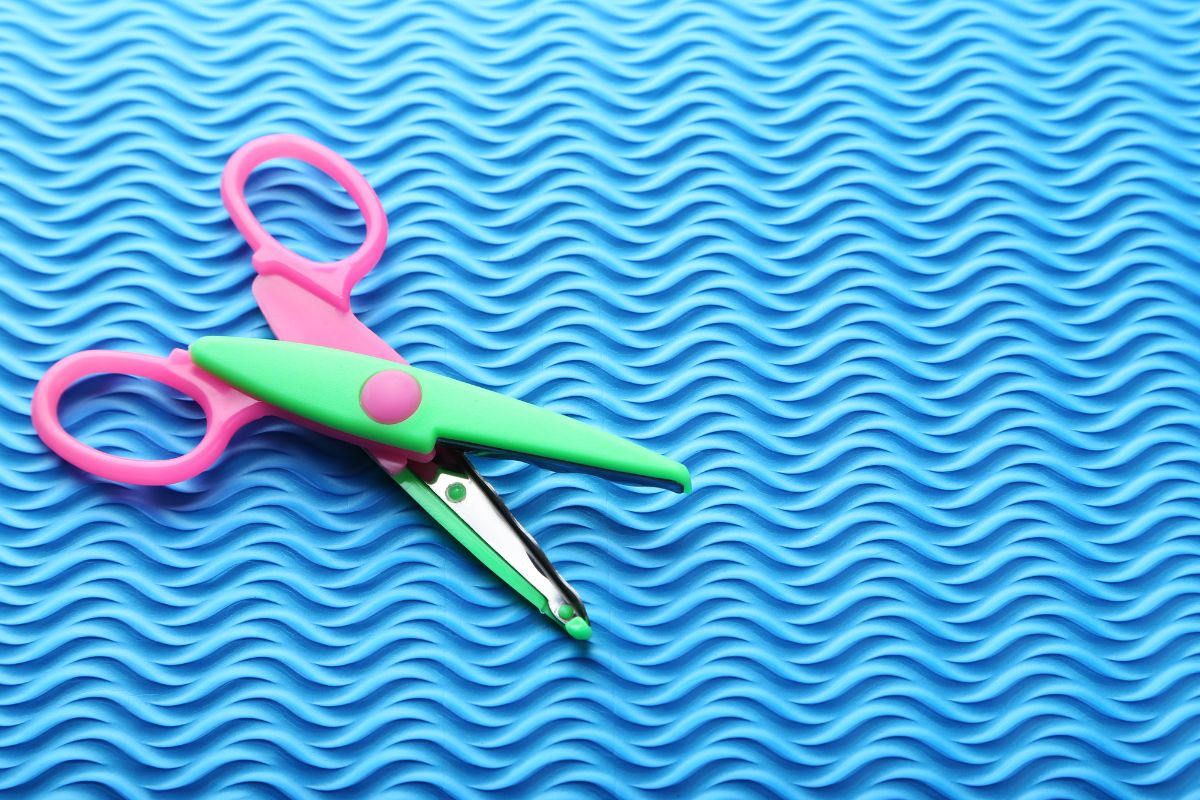 Decorative scissors are ideal for cutting patterns such as bubbles or waves into any material you are cutting. These scissors tend to have plastic handles and metal blades that are smaller in size. These scissors help make tasks and crafts more efficient.

Decorative scissors help to reduce strain on your hands when you are cutting more difficult material. However, is it essential that you keep these scissors sharp because then they become dull, and they are no longer able to cut materials.

Dressmaker’s shears are sharp and long. They are ideal for cutting fabric. The blades are tapered, with one blade having a point and the other being rounded and smooth. Each blade has a specific purpose. The rounded edge ensures that the threads and seams do not snag.

The top blade allows for much smoother and effortless cutting than using traditional scissors. These scissors can even cut curves and notches. The lower blade sits flush on the cutting surface to help cut through the material. These shears are typically seven to ten inches long and can cut through multiple layers at once.

Embroidery scissors are more delicate than many other scissors. They are ideal for cutting away at small strings that are commonly associated with embroidery work. They can easily get between beads and sequins to cut threads.

Gardening scissors or shears are typically used to cut stems and branches that are close to 3/4 inch. It would be best if you did not use them on anything larger than that because you could ruin your scissors and damage the blades. However, if you have more oversized items, there are other cutting tools that you can use.

See also  How To Craft A Paper Fortune Teller (For Kids)

There are two common types of gardening shears that you will find. They come in different sizes. Bypass shears are similar to scissors, but they have curved blades. The top blade is sharp and cuts through the branch when the bottom blade holds the branch in place.

Anvil shears are cut more like a knife with a cutting board. The top blade is sharp, and the bottom blade is flat. 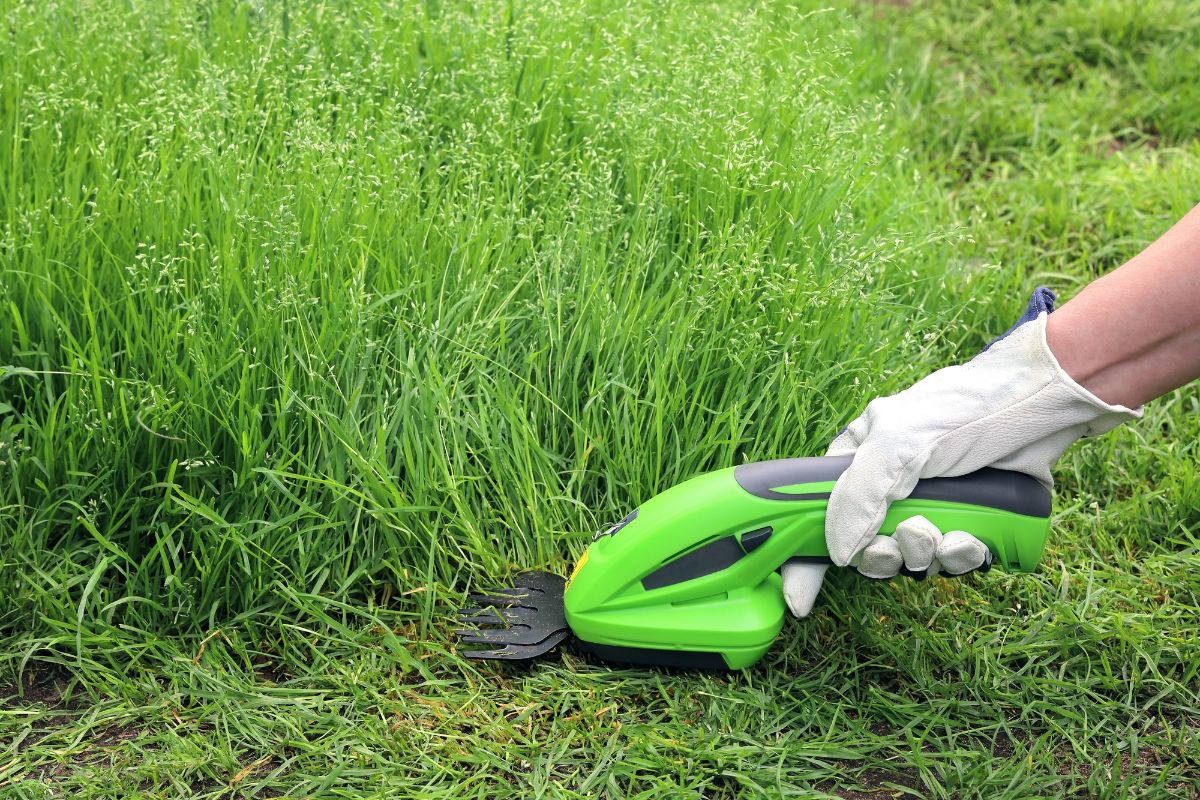 Grass shears are a different type of gardening tool. They are also different from most other tools used to trim or cut outside. Grass shears have long handles that are perpendicular to their blades.

They are used mostly for lawn maintenance, such as cutting and pruning grass. Grass shears are intended to be used in an upright position. They are used to cut the grass that lawnmowers miss. Today, most grass shears have been replaced with electric trimmers, but you can still find them around.

Hair clippers may also be referred to as hair snips or hair cutting scissors. These scissors look similar to traditional scissors but are intended to cut and trim hair. In addition, you may hear them called hair shears or hairdressing shears.

These shears are much sharper than traditional scissors. They have a sharp but smooth cutting edge. They come in many different sizes, but the most commonly used shears have either a five inch or seven inch blade.

These scissors have a piece that sticks out above the finger holes and is usually curved. This extra piece is called a tang or a finger brace. It is attached to one of the loops to give the hairdresser more control while cutting hair. 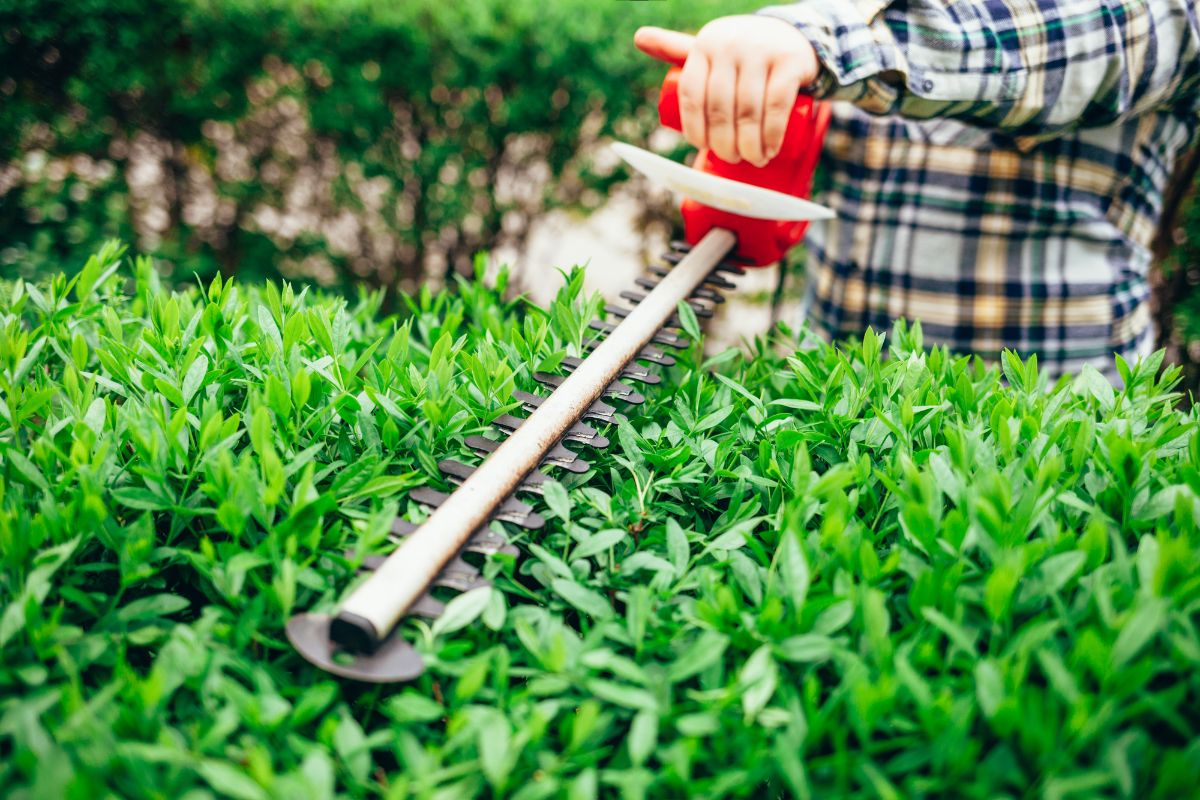 Hedge trimmers may also be called bush trimmers or shrub trimmers. They are popular among those that enjoy working in the garden. This is a tool that is held in your hand with the intention of cutting, snipping, or trimming bushes, shrubs, and hedges. Hedge trimmers have different designs and sizes. In addition, you can find manual or powered versions. 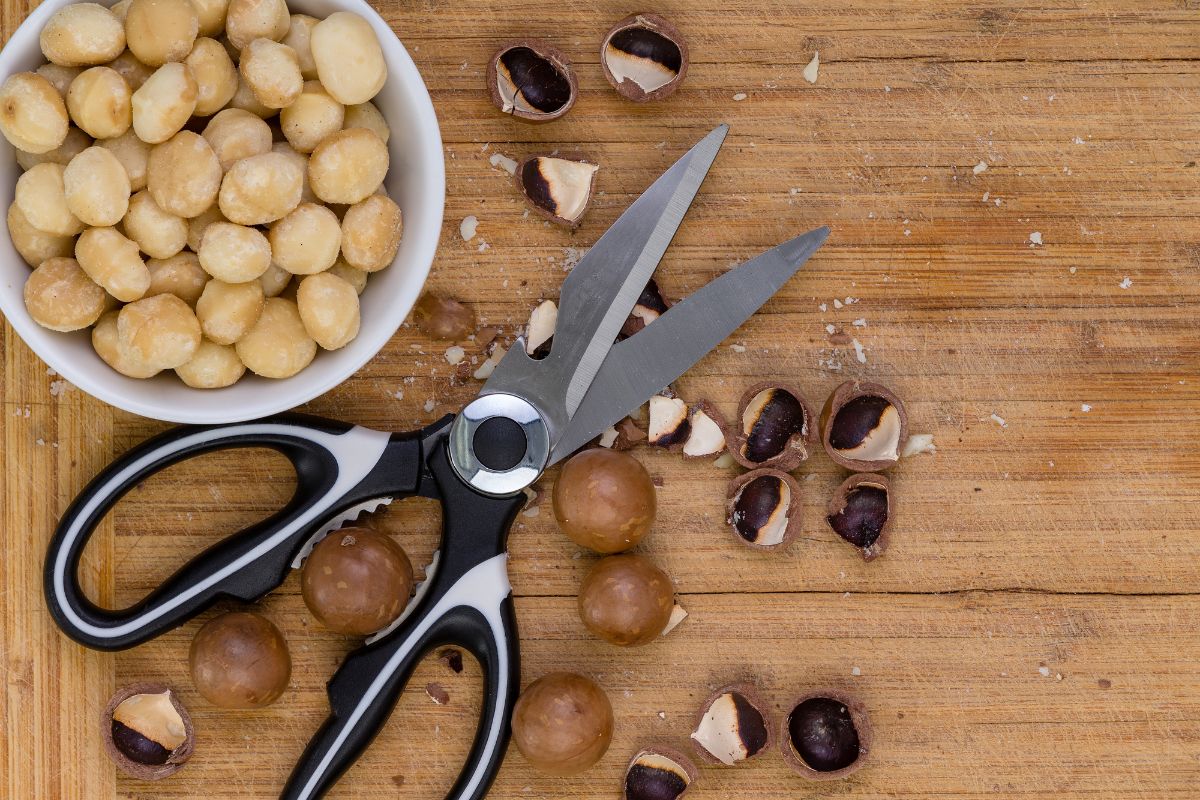 Kitchen scissors are an integral part of every kitchen. There should not be one kitchen without them. While they are great for opening food packaging, they can do so much more. In some cases, they can do the same thing as a chef’s knife, but faster. They are ideal for cutting meat. 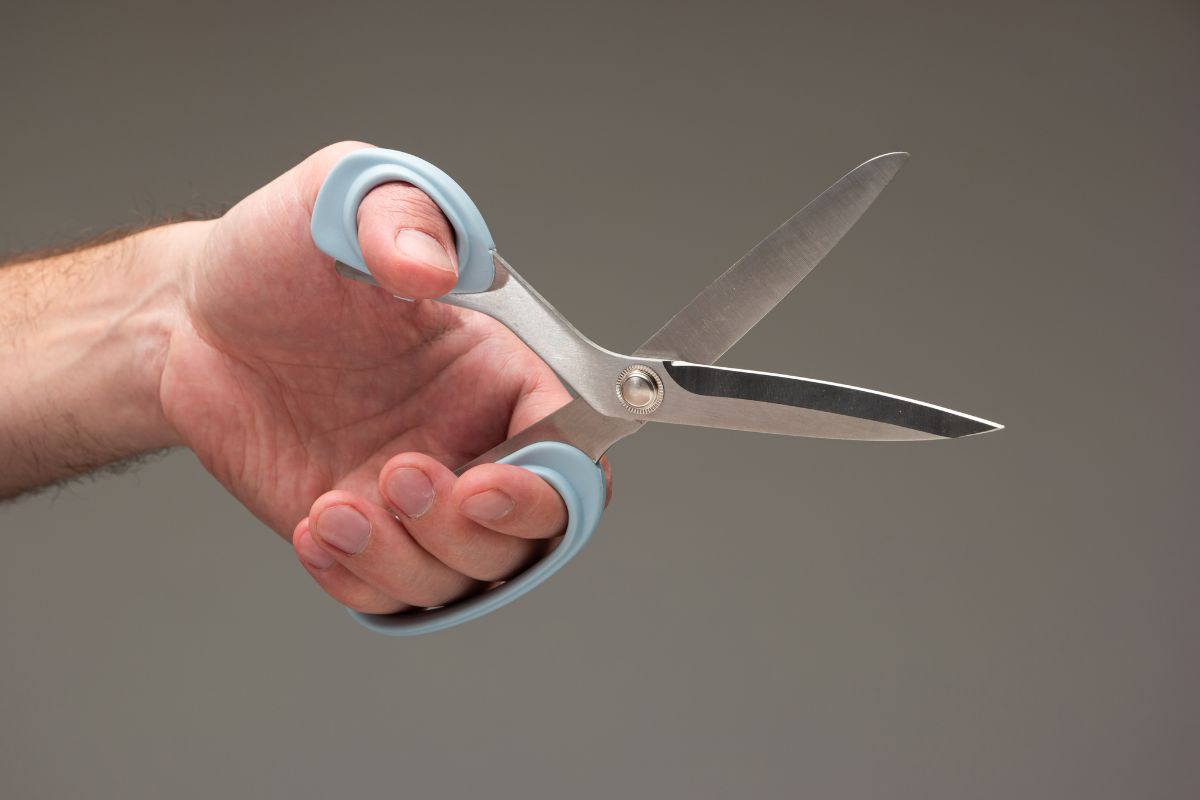 See also  How To Craft A Paper Doll (For Kids) 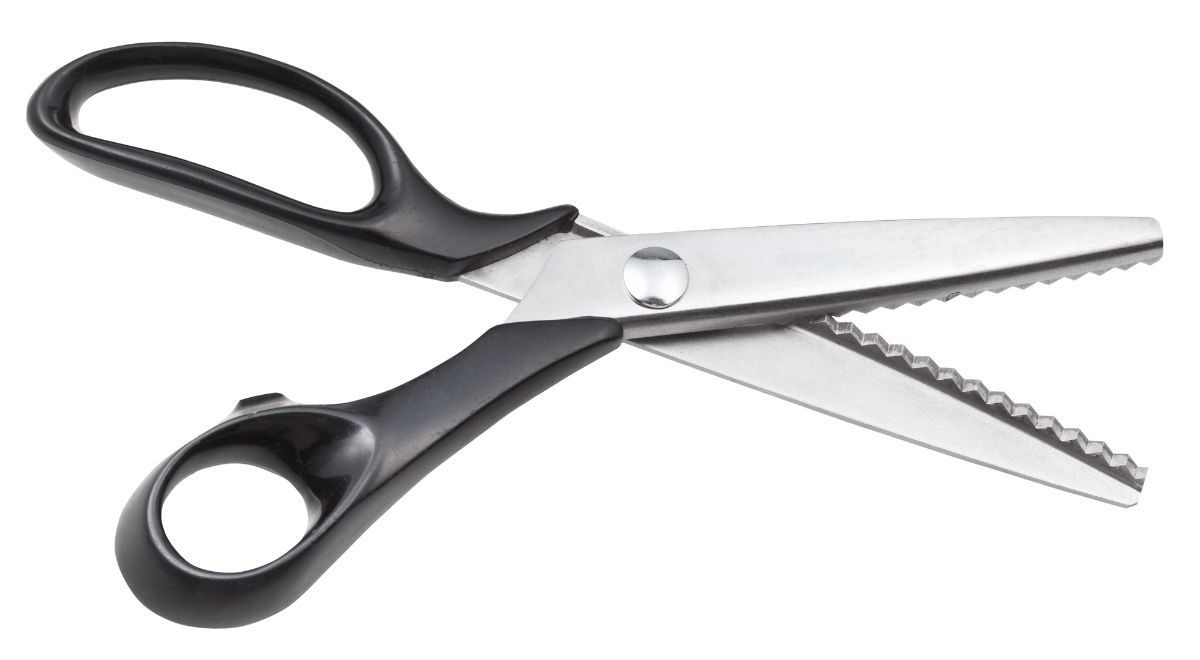 Pinking shears have blades that have a unique look because they are jagged, which creates a serrated zigzagged edge on the fabric that is cut. This helps prevent the fabric from unraveling or fraying along the edges of the ridges.

The edges are serrated to help the shears have a better grip, especially on slippery fabric, while it is being cut. In addition, these scissors have a curved handle to make it easier to cut on flat surfaces such as a tabletop.

These scissors are practical for woven cloth because they stop the unfinished edges from fraying. The serrated does not actually stop the material from fraying but restricts the length of tattered threads, which reduces damage.

Pinking scissors are used for decorative cutting and are not ideal for cutting paper. Cutting paper can make their blades dull.

Pruning shears are a particular type of garden scissors that are made to be used on plants. These scissors are hard and are ideal for pruning long tree branches regardless of length. They can be used for branches that are two centimeters thick.

A variation on pruning shears is called loopers. These are larger and have two handles and are ideal for branches that are thicker than what pruning shears can handle. 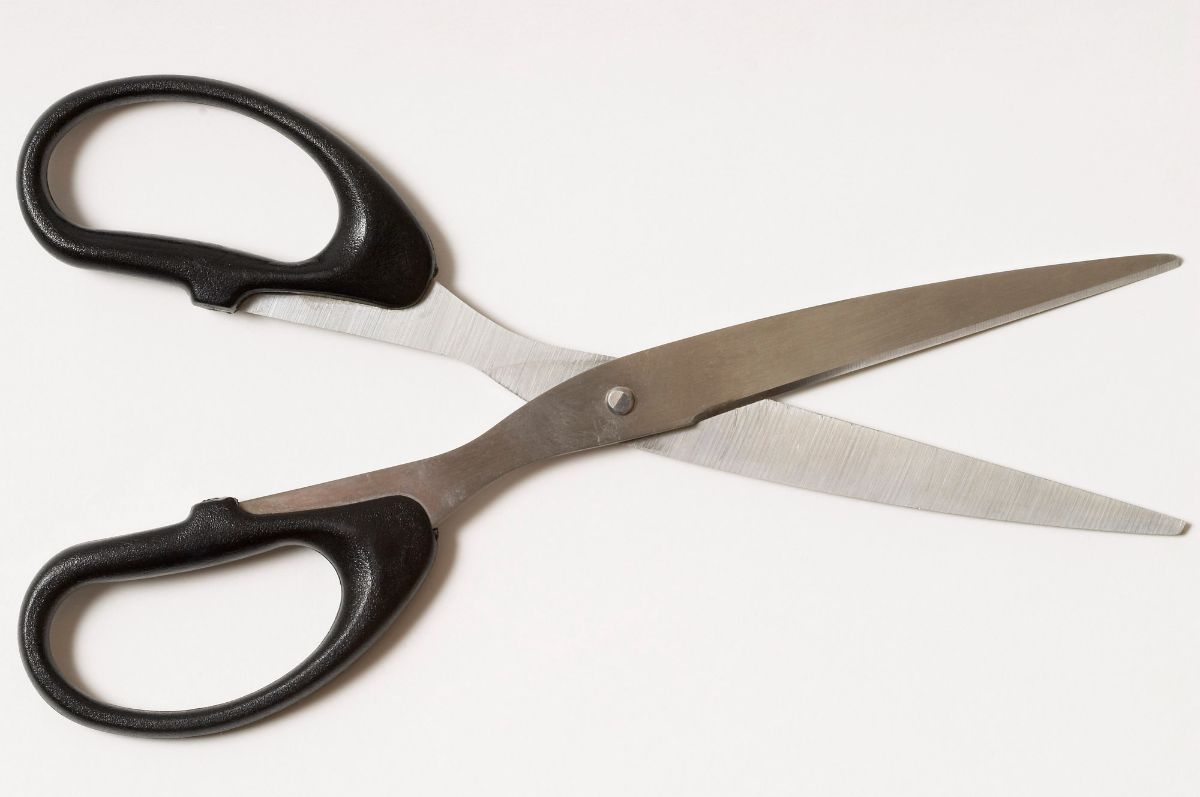 These are the typical scissors that you find just about everywhere, especially in an office. They can be used for most cutting jobs in an office. They are basic and have two straight blades with handles that are one size. These scissors are ideal for cutting paper, strings, cloth, and office material.

Tailor’s scissors are shorter and smaller than most scissors. The typical blade length for these scissors is five inches. They are typically used for quilting, crafting, sewing, or cutting through heavy fabric or leather. These scissors have two thick blades that are sharp as razors. In addition, these scissors have edges that are precisely ground to be as sharp as knives. As a result, the entire blade is able to make a clean cut.

Trauma shears are sometimes referred to as tuff cuts. These scissors are mainly used by paramedics and emergency medical professionals to carefully and quickly cut clothes off those who are injured. They have plastic handles, metal blades, and long lever arms.

These shears are bent at 150 degrees. The tips of these shears are broad and blunt so as not to hurt the individual while cutting off their clothes. These shears are for external use only and are not intended for invasive procedures. The blades are jagged to be able to cut through clothing.