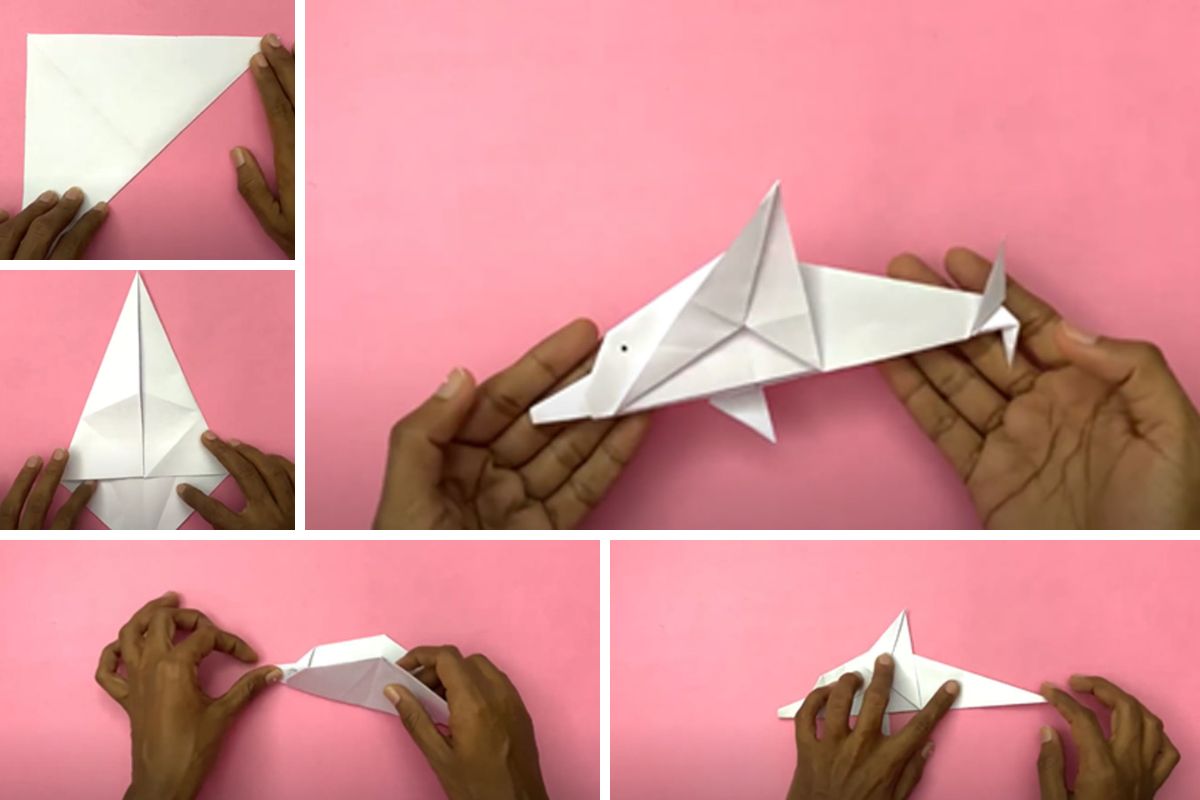 Dolphins are beautiful and playful aquatic mammals that are fast swimmers, like to communicate with each other, and are incredibly intelligent. No wonder they are one of the most beloved animals in the world.

This article will teach you, step-by-step, how to turn a flat piece of paper into a cute little bottlenose dolphin through origami.

A piece of paper 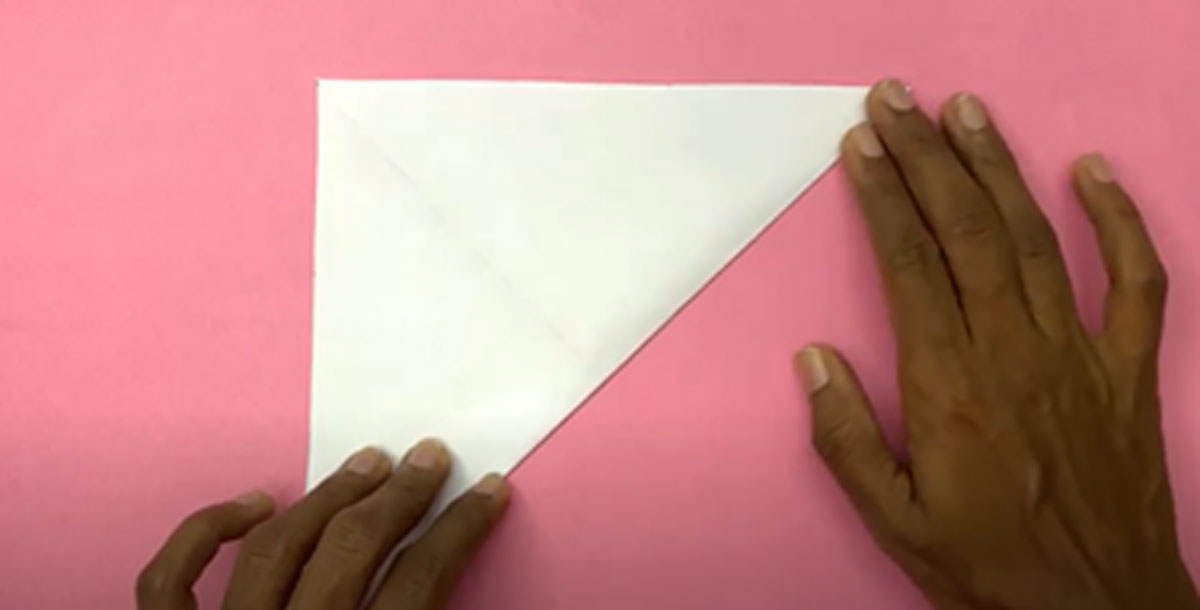 Lay the paper in front of you so it looks like a square. Start making a diagonal crease by folding the paper in half, taking the bottom right corner, and folding it over to meet the top left corner. Make sure to press down the fold so your crease is visible.

Once done, open the fold so your paper is back to a square. 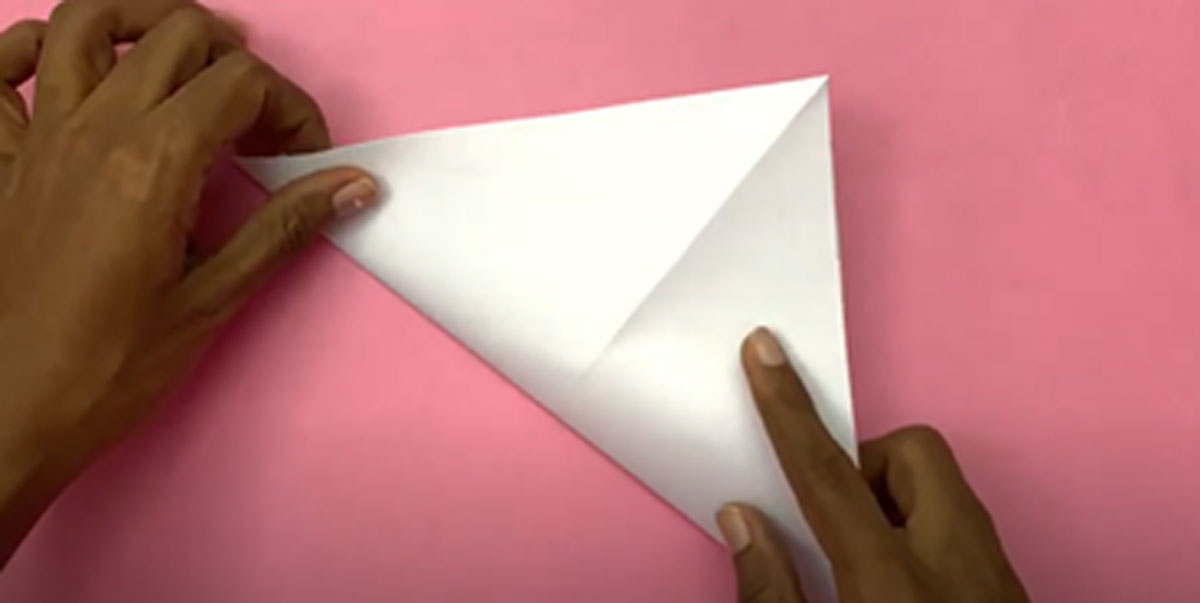 Repeat the process with the other side by taking the bottom left corner and folding it over to meet the top right corner. Press down firmly so that your crease is clear.

Open the fold so that your paper looks like a square again. Only this time, you should have two distinct creases that form an X by intersecting in the middle. 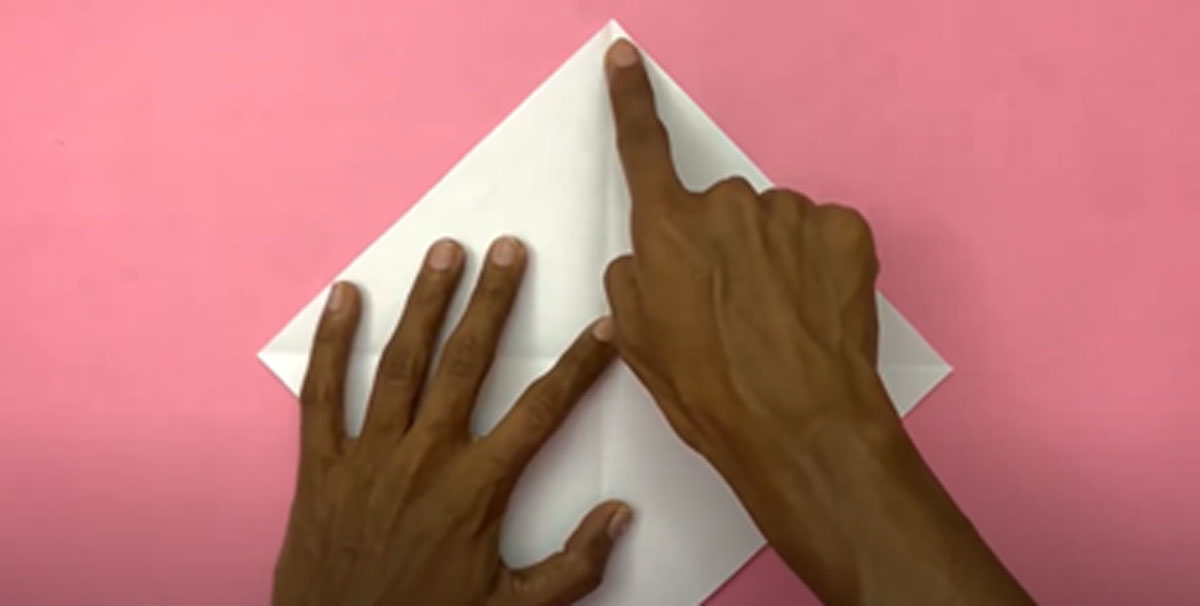 Rotate your paper 90° so that one of the corners ends at the top (i.e., your piece must look like a rhombus/diamond). 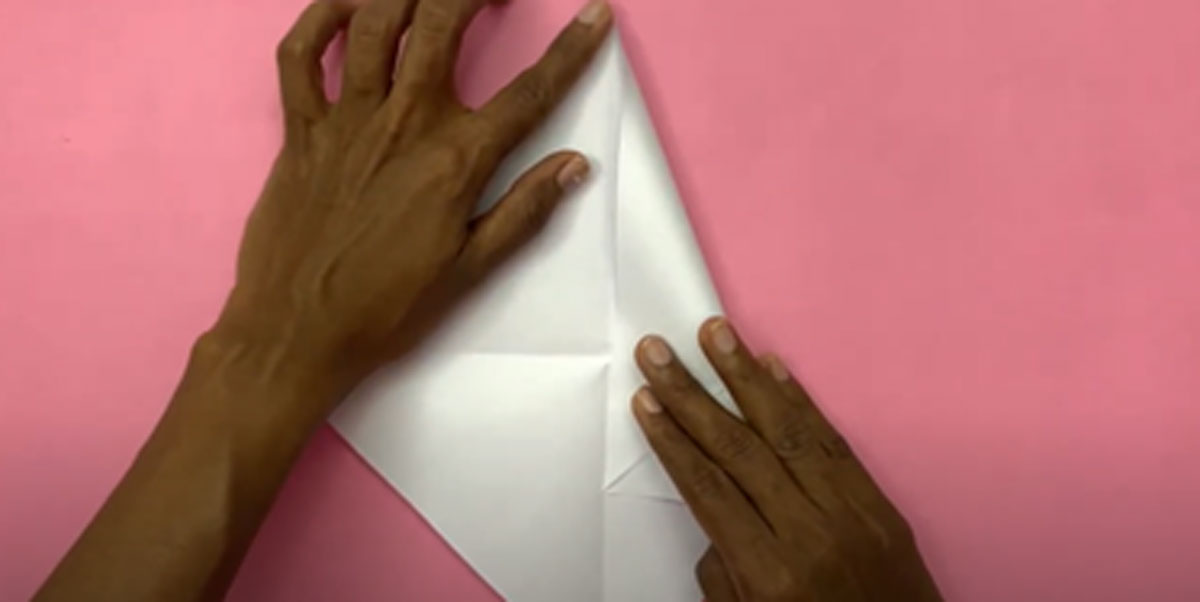 Take the top right side of the diamond and fold it inward to meet the vertical crease running down the middle.

Flatten the fold’s edge with your finger to make a visible crease. 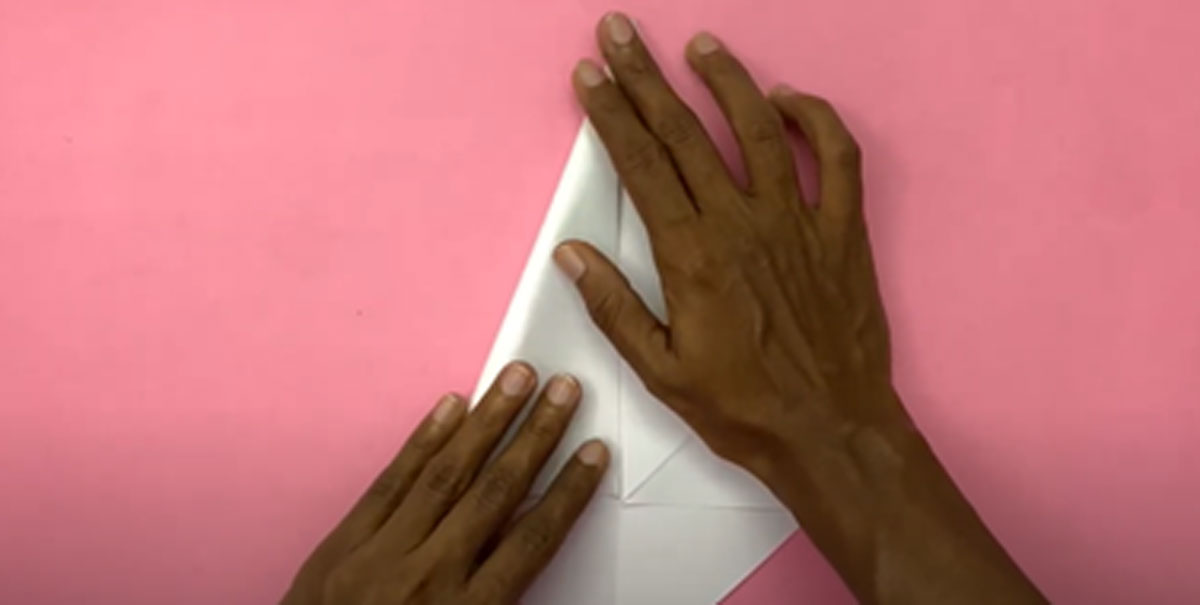 Repeat the same process with the opposite side. Take the top left edge of your diamond by folding it over to meet in the middle. It would help if you now had your paper looking like an upside-down kite with two triangular folds that meet in the middle. 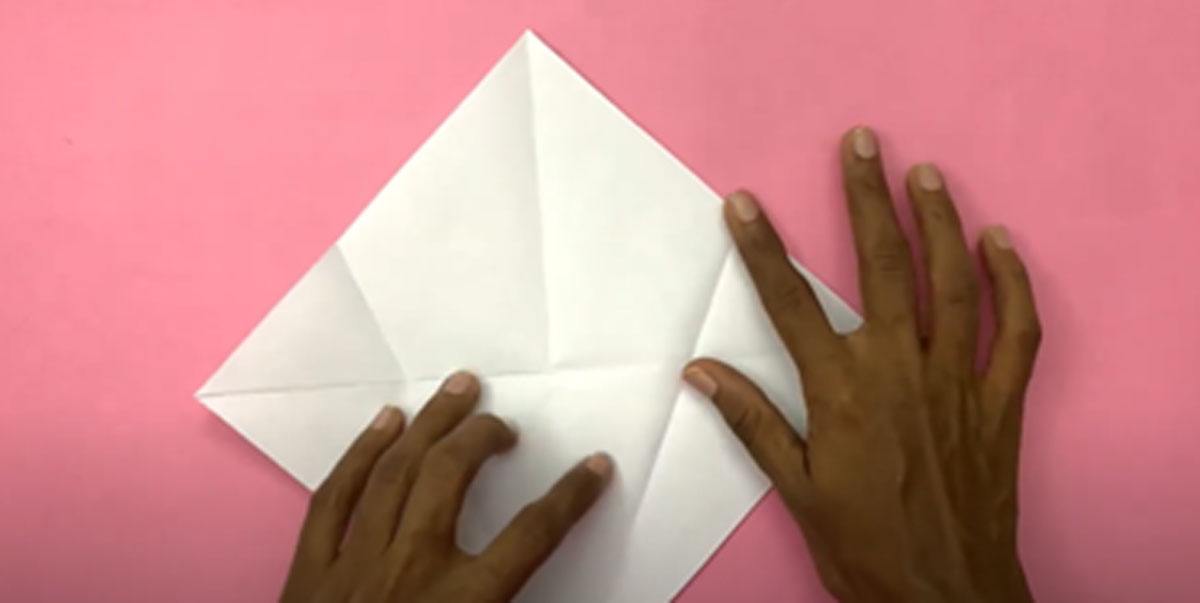 Open the two folds so that you are back to having your paper look like a diamond again, and rotate the paper 180° so that the last two creases you made look like a V. 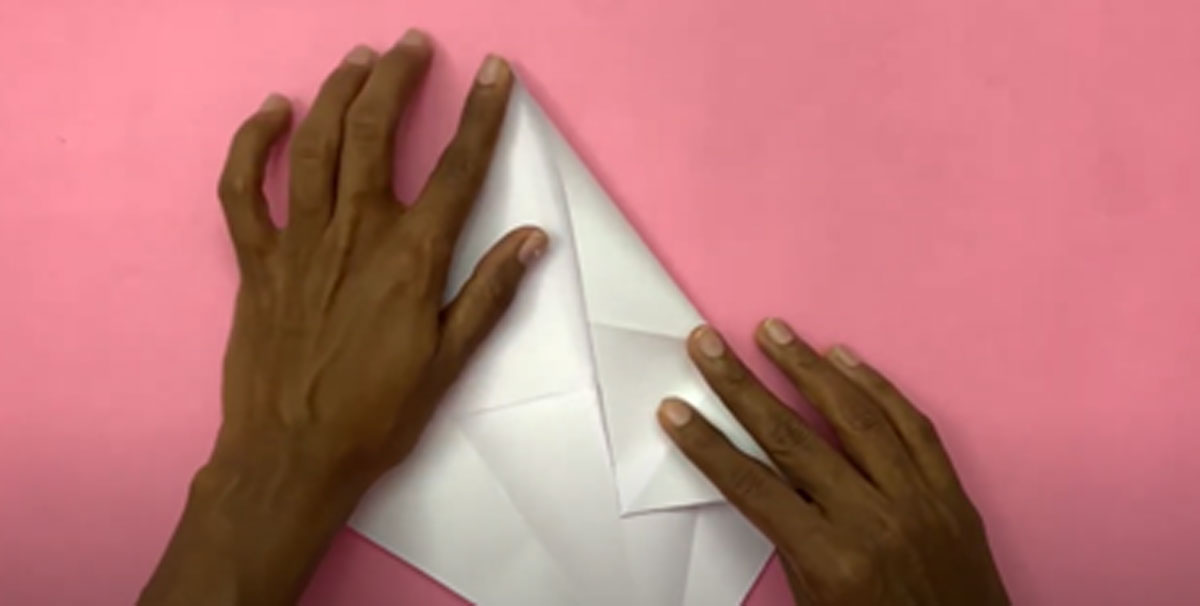 Now, repeat step 4. Take the top right side of the diamond and bring it over to meet the vertical crease running down the middle.

Flatten the fold with your finger to make the crease more visible. 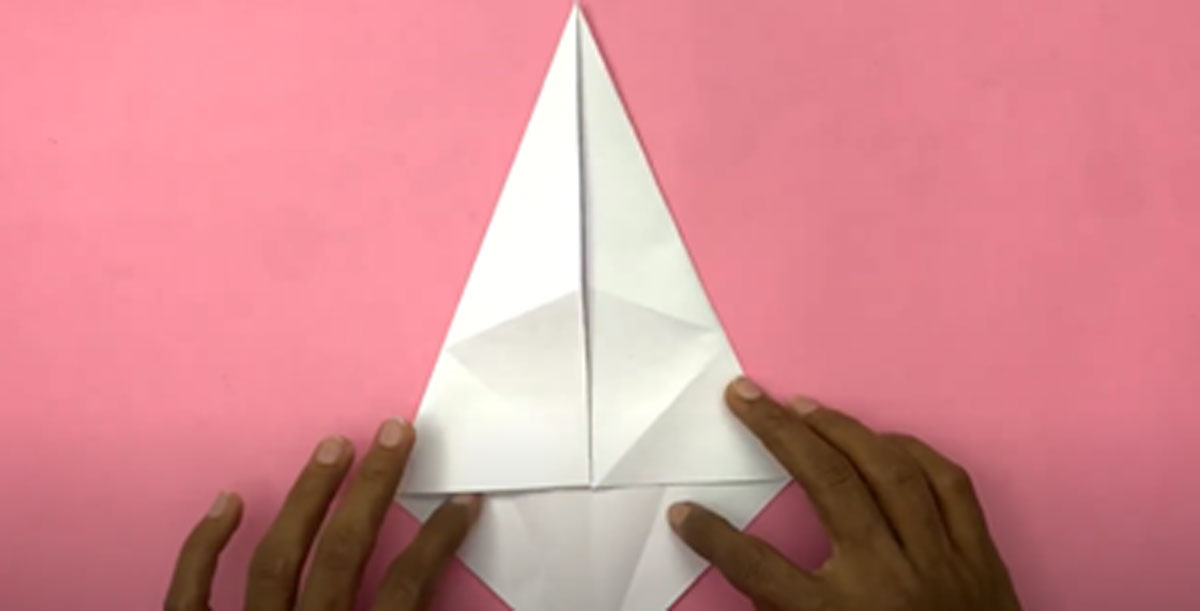 Repeat the process with your diamond’s opposite side (top left). Like in step 5, fold it over to meet in the middle.

Your paper should now look like an upside-down kite again with two triangular folds. 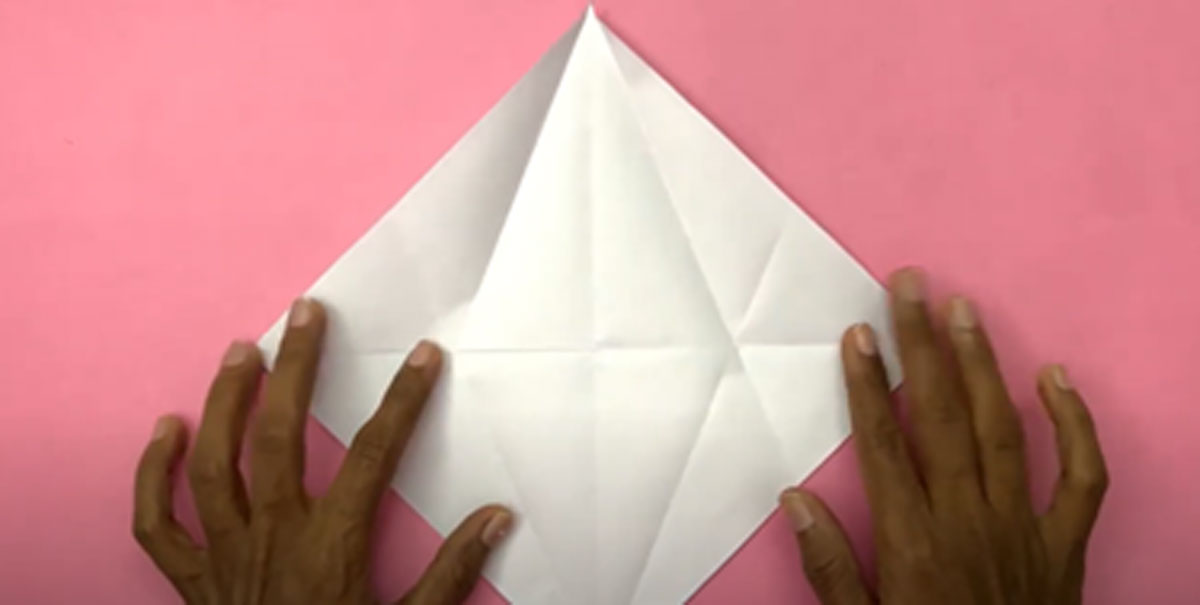 Open the two folds so that you are back to having your paper look like a diamond again. 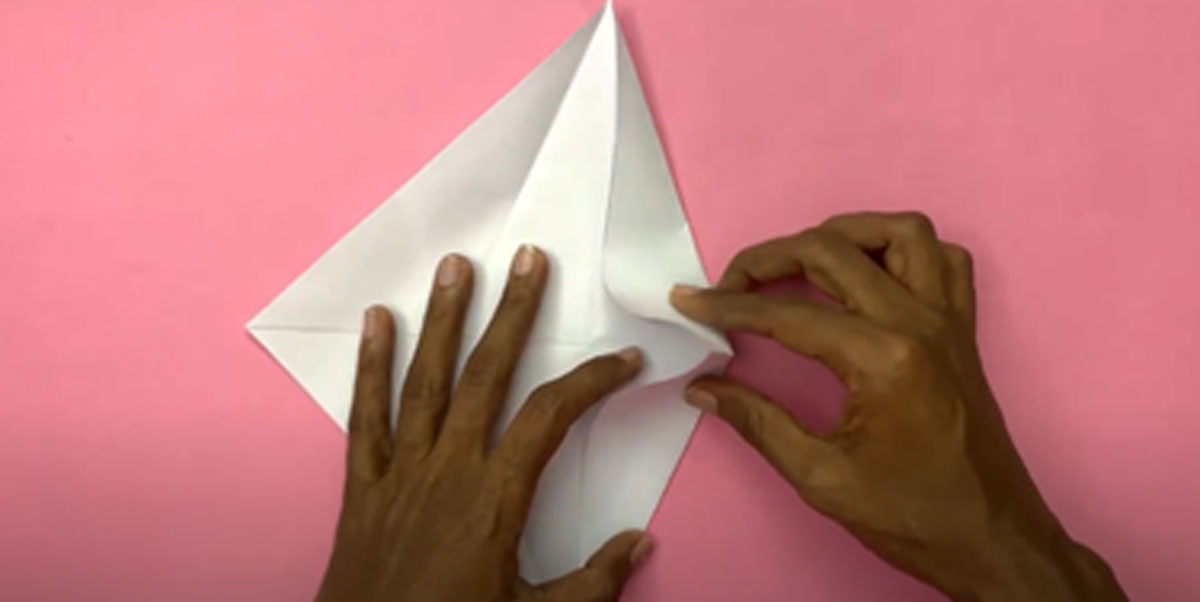 Working with the diagonal creases, fold the two righthand sides of the diamond inwards simultaneously. 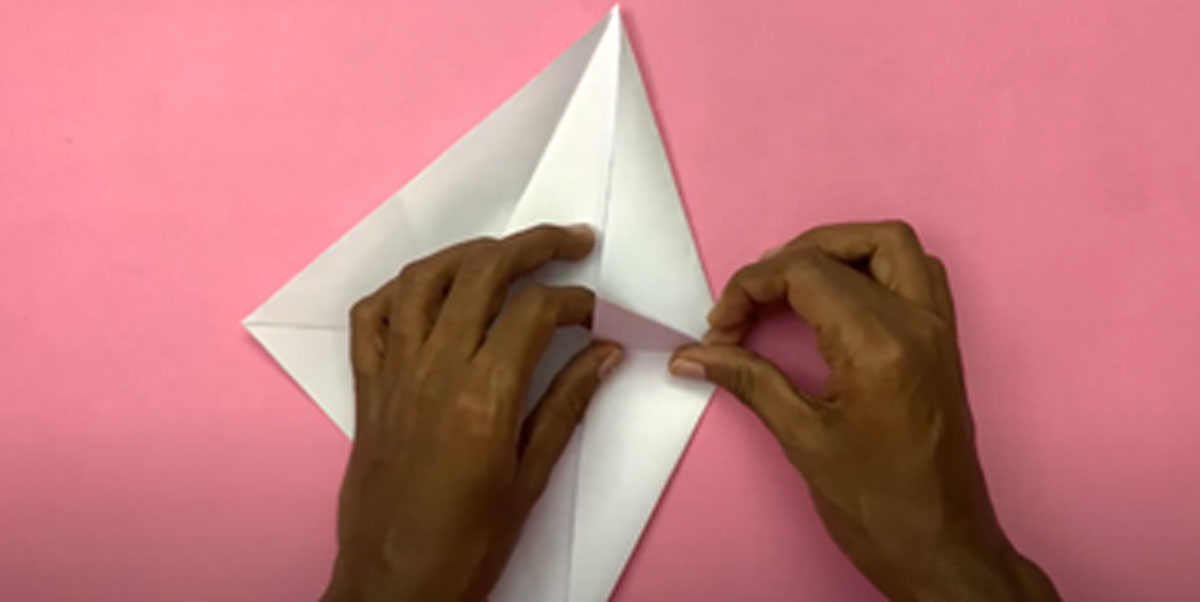 Flatten the protruding point’s edges by pressing it firmly between your thumb and index finger. 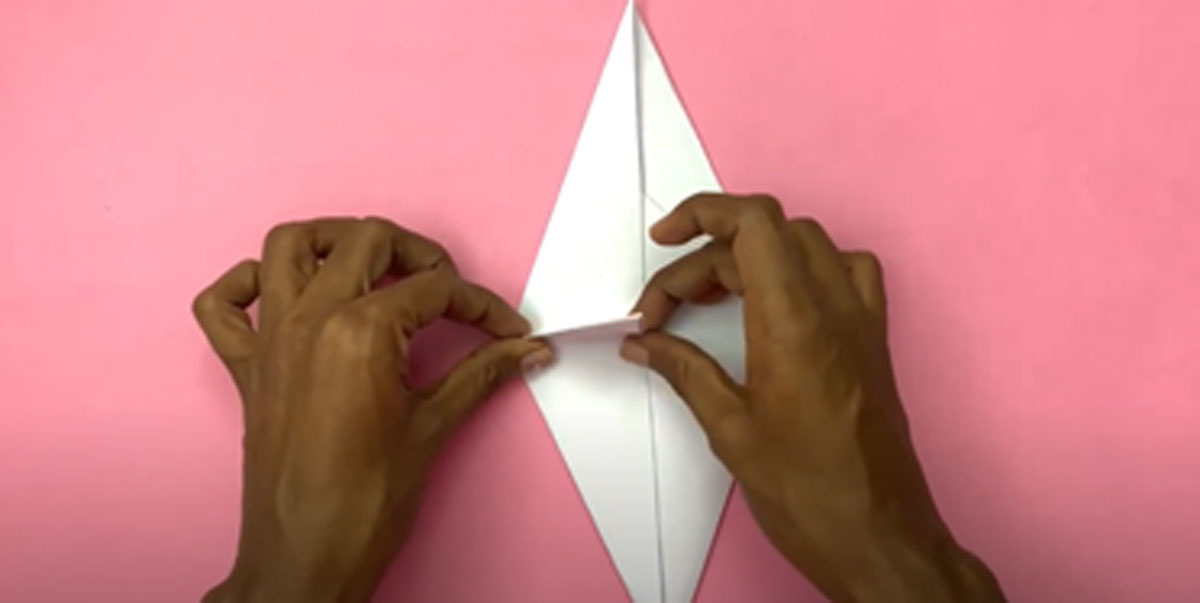 Repeat step 10 by folding the diamond’s two left sides inwards simultaneously. Flatten all the edges of the protruding point. 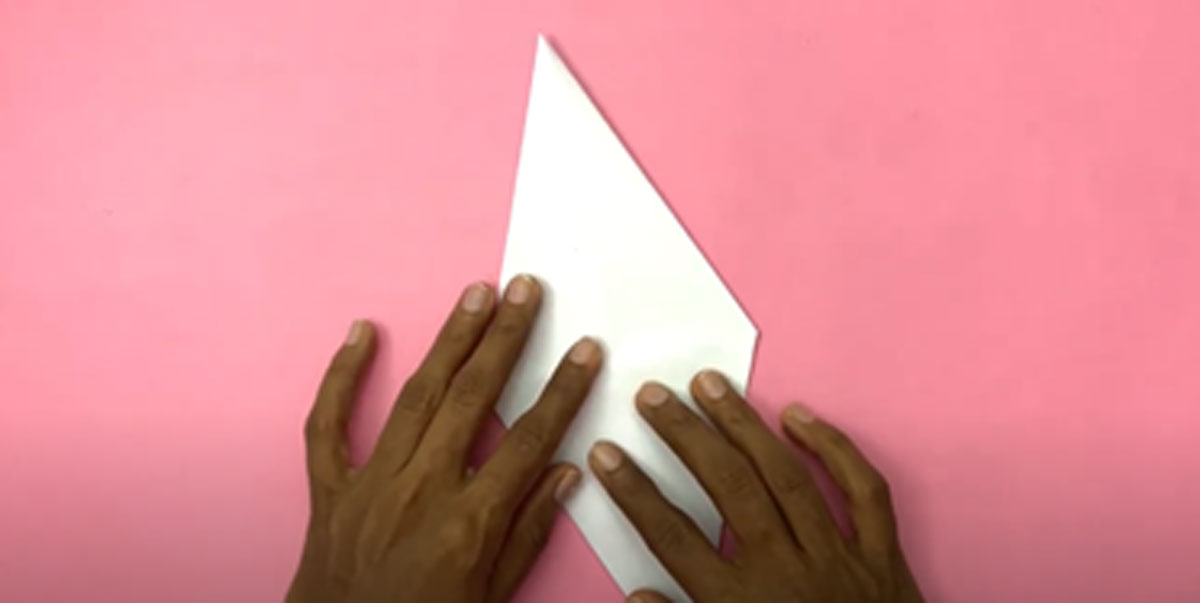 Fold the two protruding points, either upward or downward, to make it flat. Then turn your paper sculpture over so the folds are out of sight and face down your work surface. 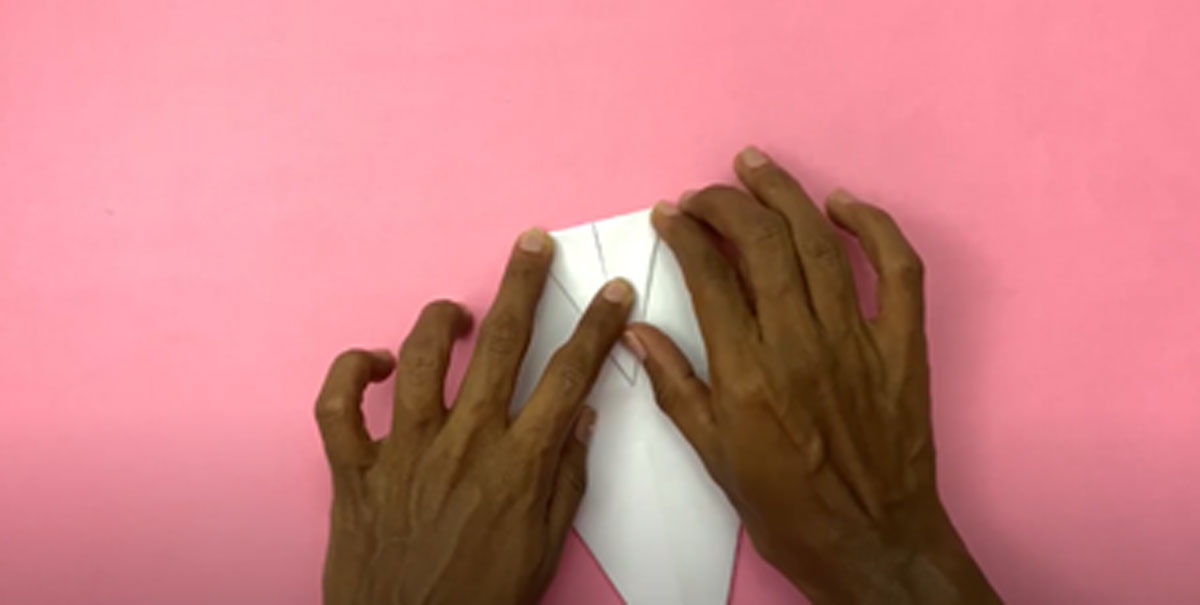 Take the top point of your new, stretched diamond and fold it downward to meet the horizontal crease running through the middle. And, as always, flatten the edges of the fold.

You will now make a horizontal crease near the top.

Bring the point of the triangle back up, making the base of the fold 1 cm from the top. Press down firmly so the crease will show up clearly.

Once you have made the crease, open the fold again, so the point faces down towards the middle. 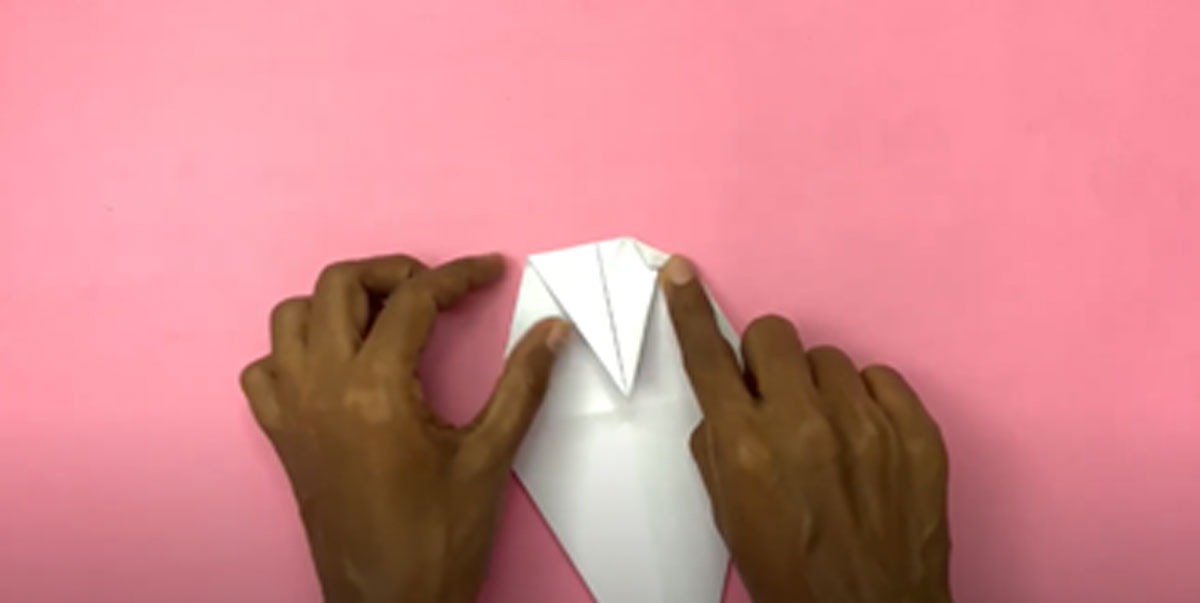 In the following two steps, you will make a pair of tiny folds using the top corners of your shape. They should look like a little dog’s ears by the end.

Starting with the top right corner, make a small fold inward. Big enough so that the point of the ‘ear’ aligns with the horizontal crease you created in step 15.

Follow the same method as in step 17 by folding the left corner inwards to make the second ‘dog ear.’

Flatten both protruding folds by firmly pressing down on them with your fingers. 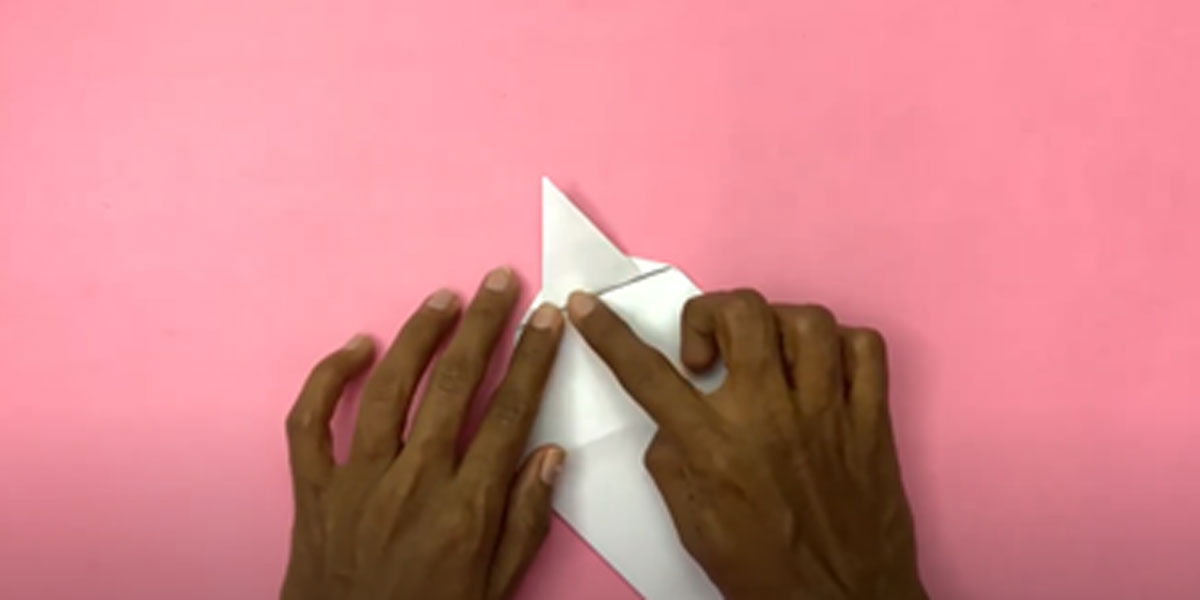 Fold the larger triangle upward using the horizontal crease you made earlier as the base. The triangular fold must overlap with the ‘dog ears’ on either side. Press down to flatten.

Turn the top point down so that the small triangular fold is roughly the length of an adult’s fingernail (about 1 cm). Press down on it firmly to flatten it. 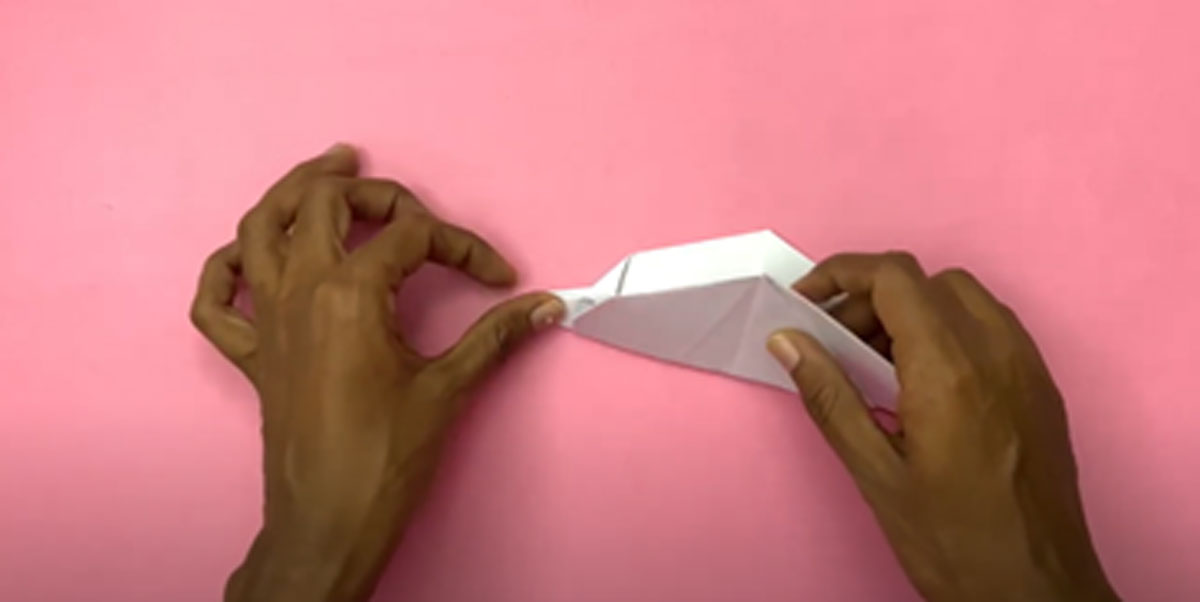 Fold the entire paper shape inward in half, with the longer sides closing together on each other like a book.

Press down on all the shape’s edges to ensure it is flat.

The following two steps are trickier, so it might take a couple of attempts before you get it right.

Lift the flap (that will become the dolphin’s dorsal fin) and open it like a book, exposing the inner surfaces. When opening it up, it should look almost like a tent. 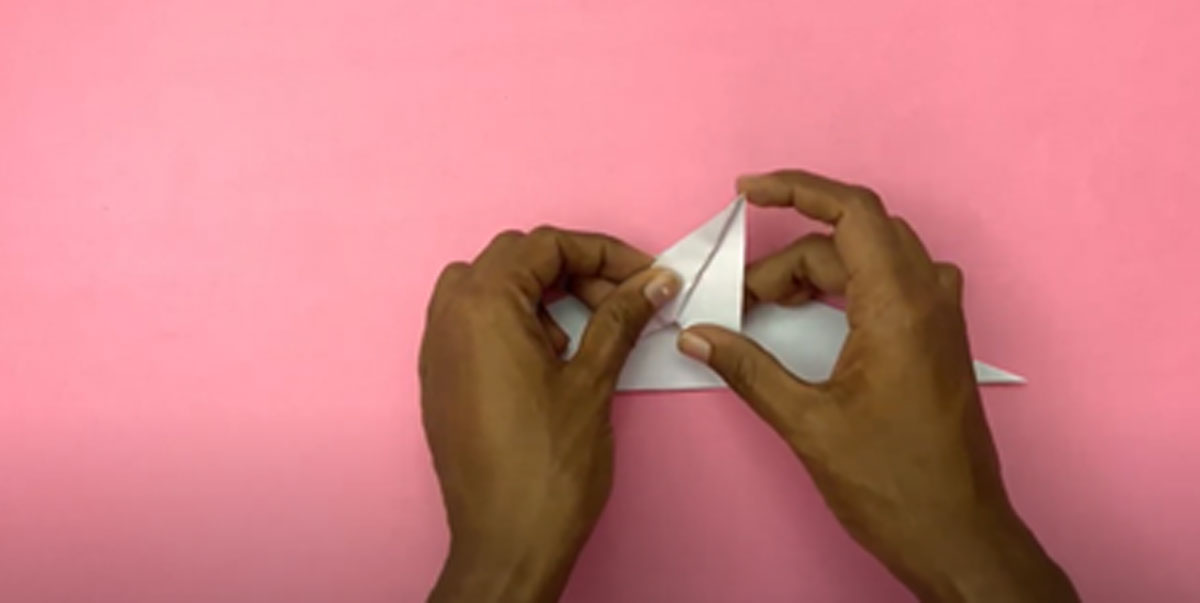 Bring the sides together so that they are facing you. 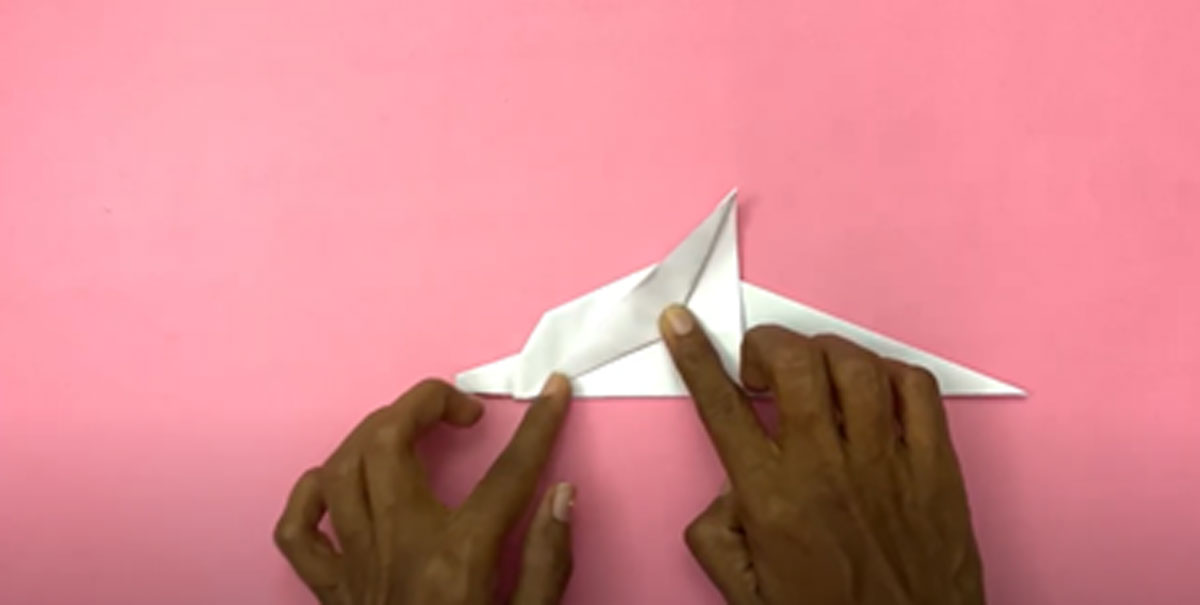 Now flatten all the edges of the dolphin’s dorsal fin. 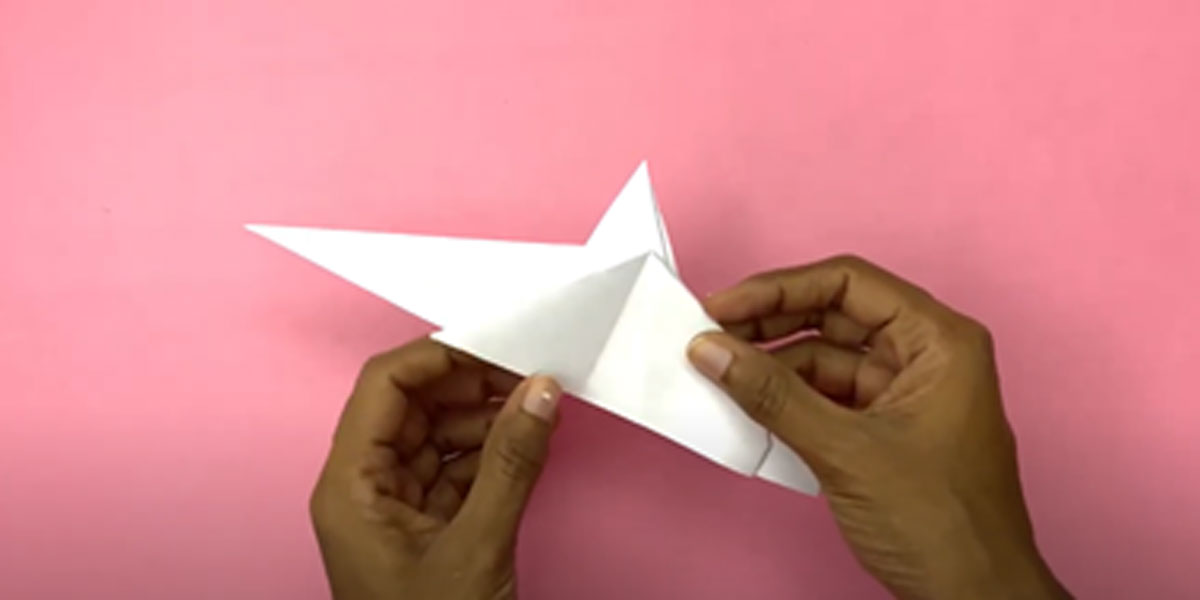 Once done, turn your dolphin around so that you can work on the other side. 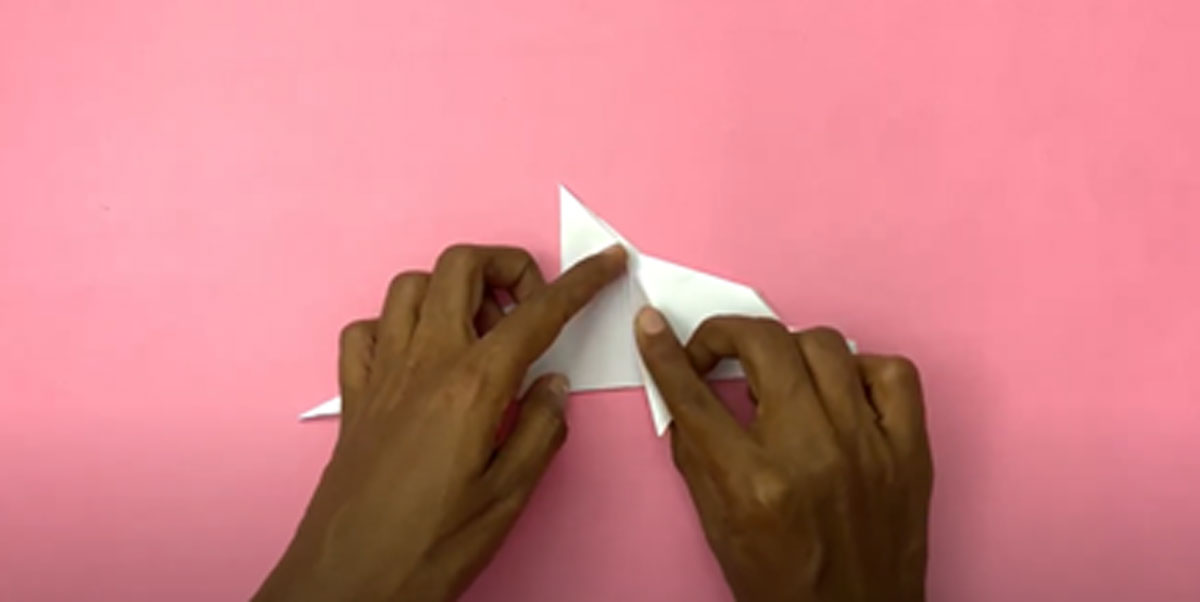 The fin facing you now will become the dolphin’s pectoral (bottom) fin. To do this, take the longest side of the protruding triangle, and fold it inwards to meet the body at the vertical crease. 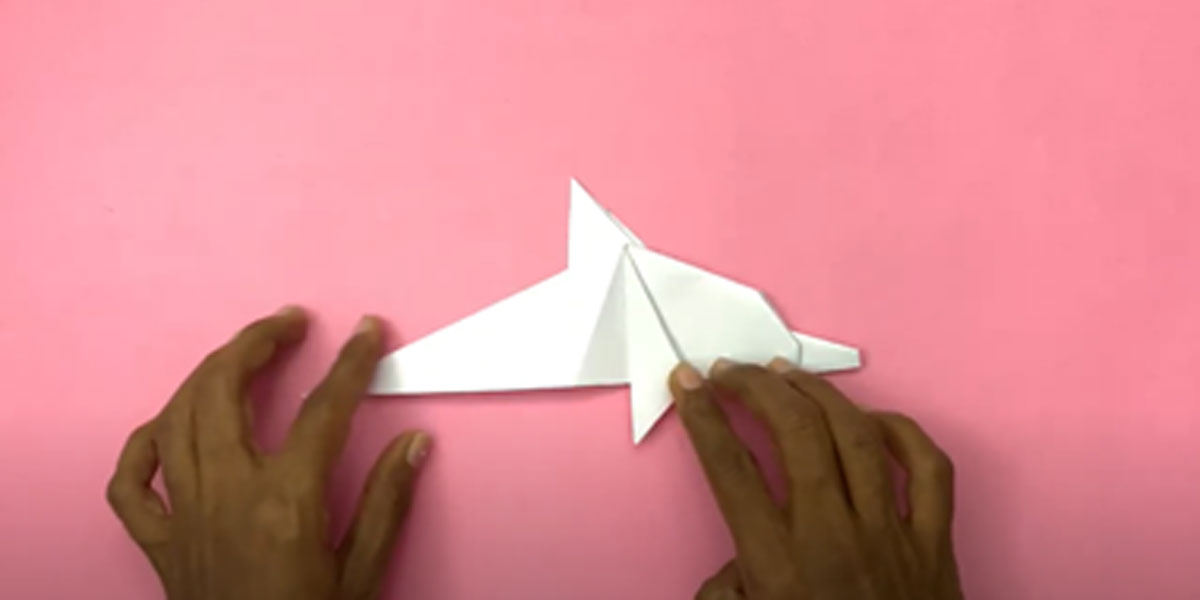 Press down to flatten the pectoral fin. 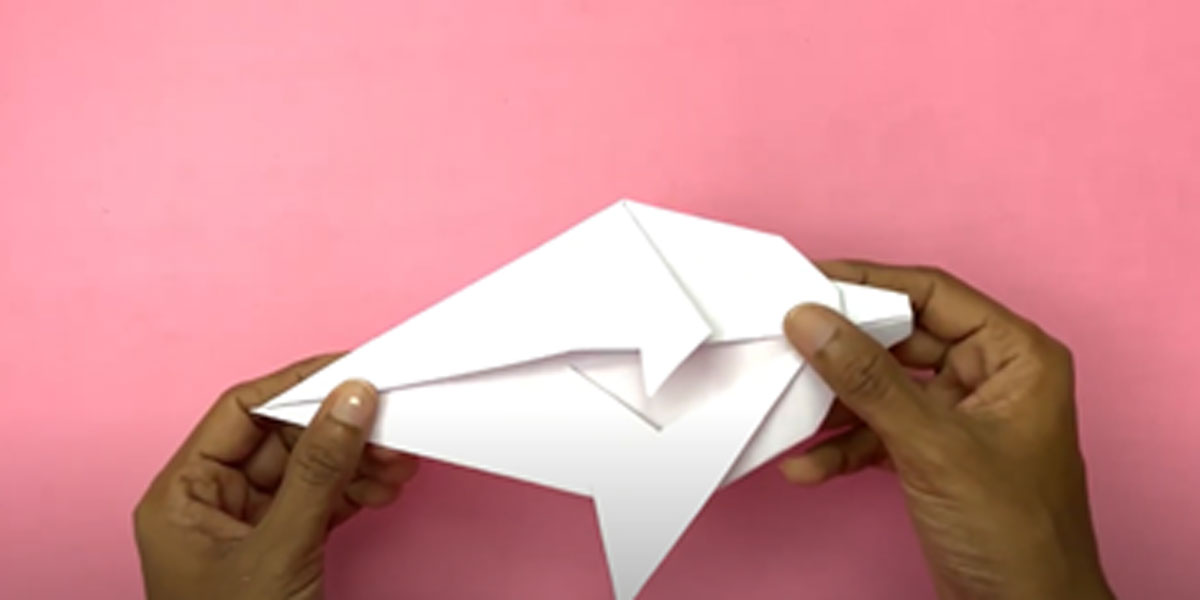 ‘Butterfly’ your dolphin by unfolding it so you can see all the previous folds you made (steps 14-22). 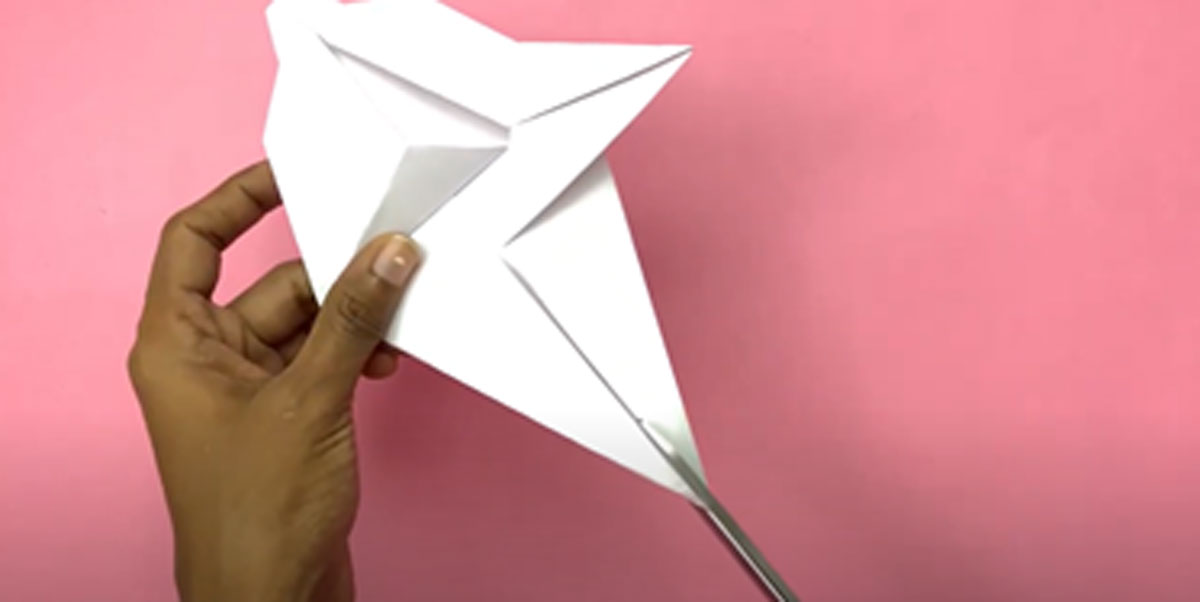 Take a pair of scissors and make an incision in the tail of your dolphin – roughly 2 cm long.

Turn the butterflied dolphin around so the fins are face down on your work surface.

Close the central fold again, leaving you with the earlier dolphin shape and dorsal fin facing you.

Take the edge of the tail and fold it 90° towards your left so you end up with the tail fin pointing upwards.

Separate the two tail fins and press down to flatten them. 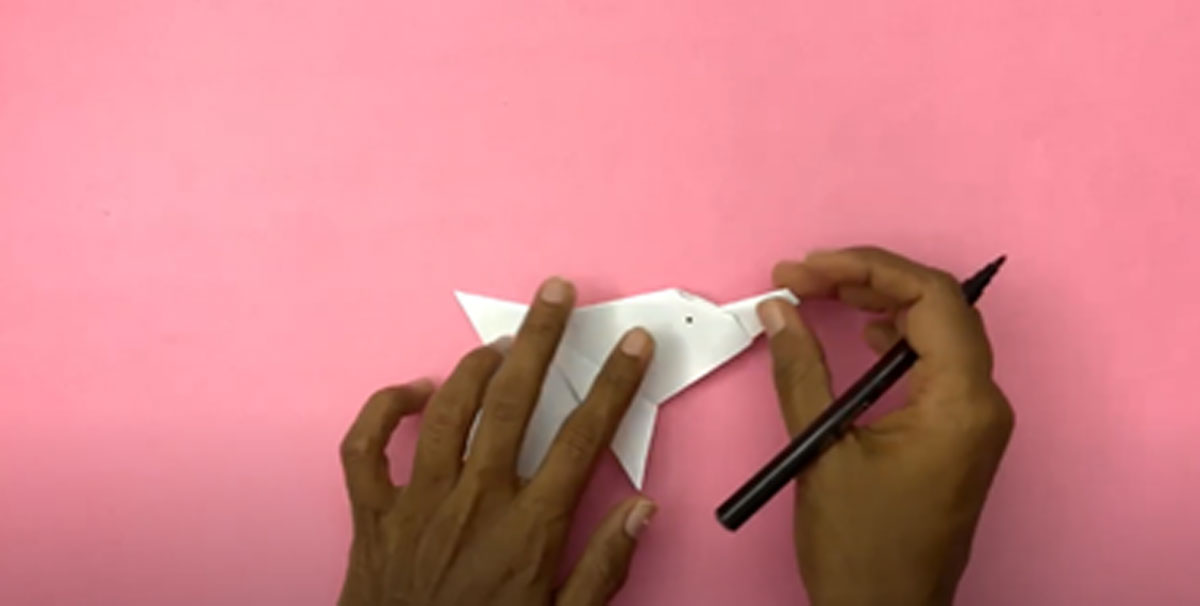 To represent the eye, take a black marker and make a dot in the upper half of the dolphin’s head towards the front.

Repeat step 37 on the other side so the dolphin has two eyes (one on each side).

And that’s your paper dolphin done!