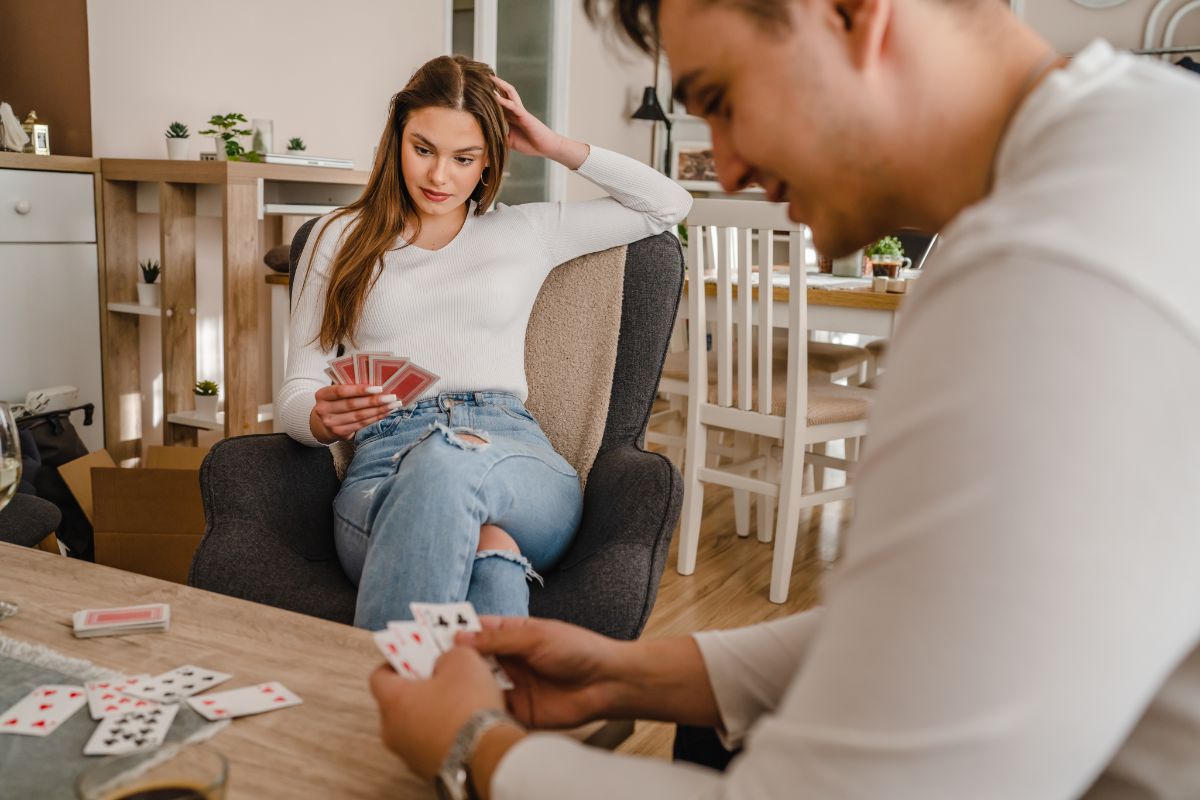 There are some card games that just work best if played by two players. These include the all-time favourites Snap! and Cassino. However, many of the more popular ‘bigger’ games can also be played by only two players, including Poker and Cribbage.

I have always loved card games. One of my best memories is my best friend and I, sitting on my bed with a deck of cards, playing Snap! We had to keep our voices down, so we didn’t wake anyone. And we played well into the night.

What better memory can you build than playing a card game with a friend?

Cribbage is a combination of cards and board when it comes to games. The aim of the game is to earn 1212 points. Your progress is indicated on the board by means of pegs. It is the cards that are the core of the game. To score points, the cards must be played and grouped in different sets. There are two scoring stages in Cribbage and a scoring system specific to the game.

This game doesn’t have a lot of rules, but there are many tactical moments and subtle play that make it appealing. It is best played by two players, but can be adapted to three or four players.

Poker has that image of dingy rooms, with players keeping their cards close to the chest while eying their opponents warily. Part of the game is tricking your opponent/s and reading them to work out who is fooling who.

See also  Wondering How To Keep Your 9 Month Old Engaged? Try These Activities!

Poker can easily be played by two people, with one acting as the dealer and player. Each player has a hand of five cards and places bets that theirs is higher than their opponent’s. The bets are in the form of money, or something that stands in for money, and are placed in the middle of the table. The aim is to win the pot in each round.

Go Fish is a fun card game for literally any age and at least two players. Each player is dealt 7 cards, which they hide from their opponent. The rest of the pack is spread out on the table, like a school of fish in a pond.

The aim of Crazy Eights is to get rid of all your cars. Each player is dealt eight cards, while the rest of the deck is placed face down on the table. The top card is turned face up and will become the bottom of the discarded card pile.

The first player can discard a card if they have one that matches the suit of the card face up on the discard pile. If the player does not have a card to match the face-up card, they must pick up a card off the stock pile.  It is then the other player’s turn.

If one of the players has an eight, even if it doesn’t match the displayed card, it can be played and the suit will change.

Kings in the Corner

The aim of Kings in the Corner is to get rid of all your cards by playing them on the table. Each player is dealt seven cards. The rest of the deck is placed face down on the table as a stockpile. Four cards are placed face up on the four corners of the table.

Each player draws a card from the stock pile and plays this and as many cards from their hand as they can in one move by matching them to one of the cards (or pile of cards) in the corners. The cards can be placed in ranking order, or in sets per suit.

When a player cannot make any more moves, the turn passes to the other player. This continues until one player has played all their cards.

This is a fishing game that is best played with two players. The aim is to capture cards, either from the table, by building combinations, or by capturing the opponent’s combination build.

Each player is dealt four cards, with four face up on the table. These cards must be played on the table, adding to combinations or building a new one. When a combination is complete, the cards are placed face down in front of the player to be counted at the end of the game.

The winner of a Cassino game is one who gets the highest number of points.

Snap must be the perfect game for two people. Each player is dealt half the pack. Each one places one card at the time on the table – at the same time. This continues, with new cards being placed on top of the pile of cards.

When two cards are played that match in value, “the first person to notice the two matched cards calls out “Snap!” and wins both piles”. The aim of the game is to win all the cards. If the players call ‘Snap’ at the same time, the piles of cards are combined and placed to one side, face up. The players can call ‘Snap!’ when a card matches the top card of the penalty pile.

Two players compete for points in this game by building sets of cards: runs, three of a kind etc.

Each player is paid seven cards. The others are placed in a pile face down on the table. One card is placed face up next to this pile as the discard pile.

The first player takes up a card from the table and adds it to their hand. The card is taken from the stock pile, or the discard pile. If it is useful, they keep the card and discard another. If the card is not useful, it is discarded. When the player has enough cards to form a set (three of a kind, or a run), they can be placed on the table.

The play continues until a player gets rid of all their cards.

The whole deck of cards is spread out face down on the table. The aim of the game is to pick up as many pairs of cards as possible. They must match at face value, or be the same picture card.

The first player turns over two cards. If they are a pair, they take them and have another try. When they turn over two different cards, the play passes to the next player.