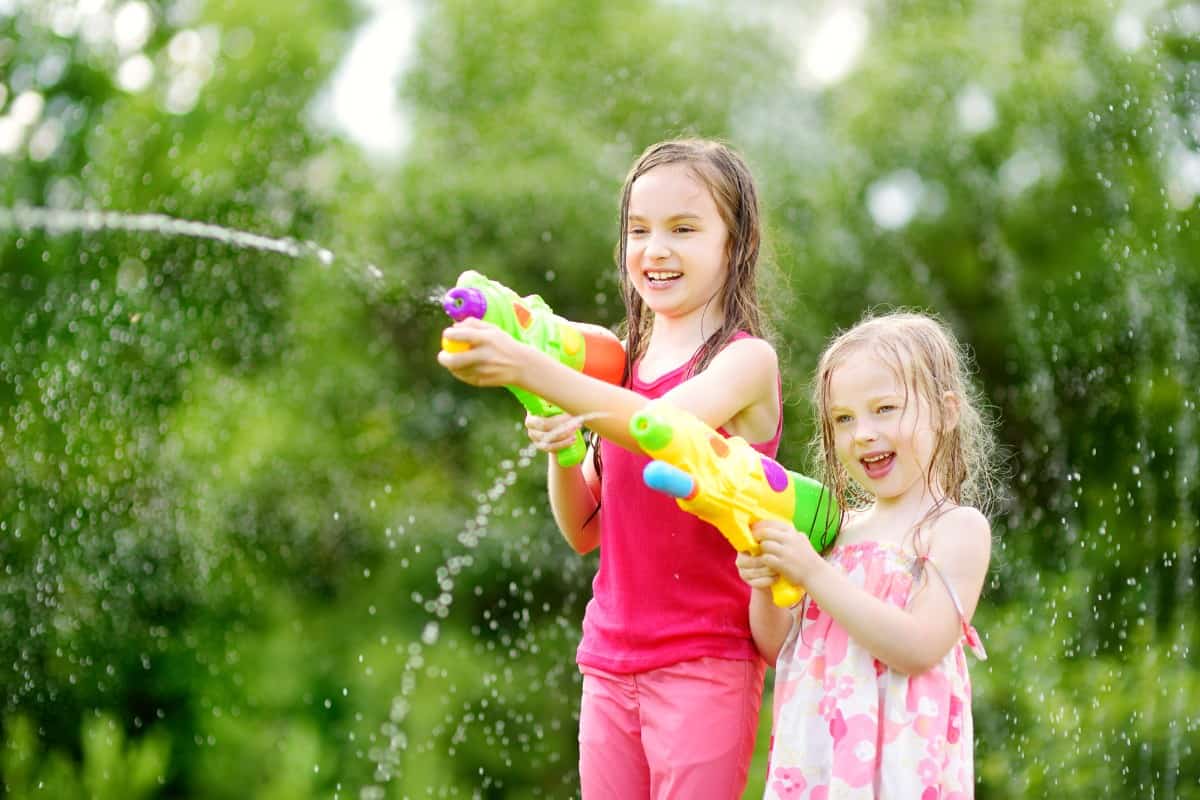 As a kid, the only thing worse than being bored was being bored and too hot. Waging water wars around the neighborhood was the easiest way to solve both problems. Giving kids a few water guns and letting them cool down while wearing themselves out has been a tried and tested parenting technique for a century.

While they haven’t undergone the same evolution as computers, water guns have seen some technological improvements and new features over the last 25 years that have greatly expanded the available options. Note that the frequent change of manufacturers and available products means that many of the models mentioned below may not be available outside of resellers. 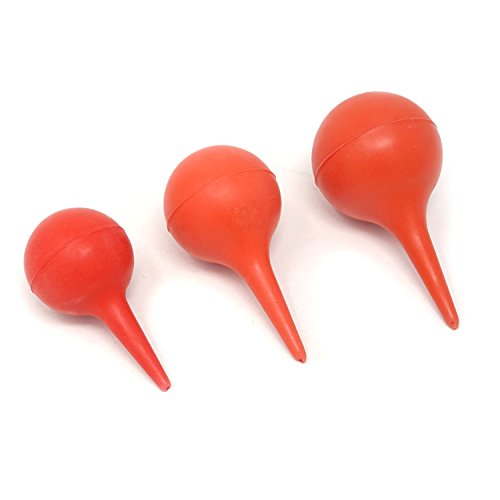 Playing with soft, squishable plastic toys that have airholes was the first time most of us experienced the joy of water bending. Squeezing the bulb expels everything inside of it, and letting it expand draws in the surroundings. Repeat the process in the tub, and you have a makeshift squirt gun.

The first use of squeeze bottles as squirt guns dates back to at least the 19th century. In a patent by John Walter Wolff in 1896, he referred to his invention as an “improvement” over existing water gun designs. The design uses a squeezable bladder that is compressed by the hammer when the trigger is pressed.

Over time, squeeze bulbs failed to keep up with the performance and cost of new competition. Refilling them is slower than using them, they produce an unsteady stream, and the stream strength is heavily dependent on how hard you can squeeze the bulb. Their primary use was for spray bottles that only needed a slight pinch to mist the contents, and they have even been replaced there, outside of use cases like perfume bottles or medical suction bulbs. 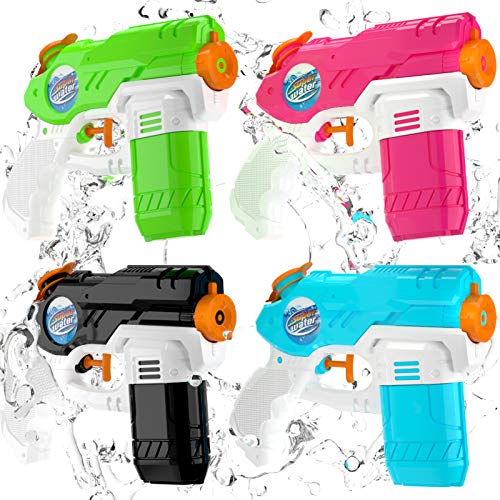 The quintessential squirt guns you can find as cheap impulse buys around the summer are usually piston-based water guns. The trigger operates the piston, pushing the water inside the gun out of the nozzle at the front. A spring pushes the trigger back into position.

Whenever you add parts, you add the chance of those parts failing. A worn spring can delay the trigger’s return to firing position or stop it entirely. If the seal around the piston trigger starts to fail, the lost pressure will lower stream pressure or stop it from firing.

Since they’re frequently small and made of cheap plastic, breaking or losing them is just as frequent as those mechanical failures in many personal experiences. 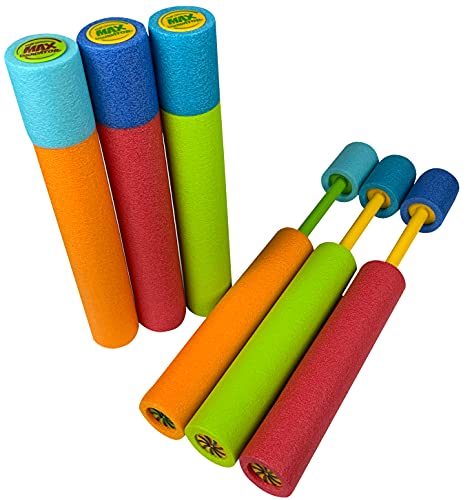 With a firm push, a slide loader will have more water pressure and distance than other cheap water guns, although too much force can break cheaper plastic. The major downsides compared to piston water guns are a low capacity and more physical effort to create a stream.

Like piston water guns, most syringe shooters are inexpensive and replaceable. They refill much faster than squeeze shooters, especially ones that have a small opening for the reservoir or a hose for a resupply tank. Conversely, you can empty the entire reservoir in a second.

See also  7 Toys for Kids Who Like to Cook

Stream speed is dependent on the user’s strength, but it’s easier for kids to generate decent power since it’s not a matter of grip strength.

Their low price and dependence on a large supply of water make them great party purchases if you have a pool or live by a swimmable body of water. Larger versions made from higher quality materials are suitable for more intense water wars. The construction is simple enough that DIY versions make for a fun family project. 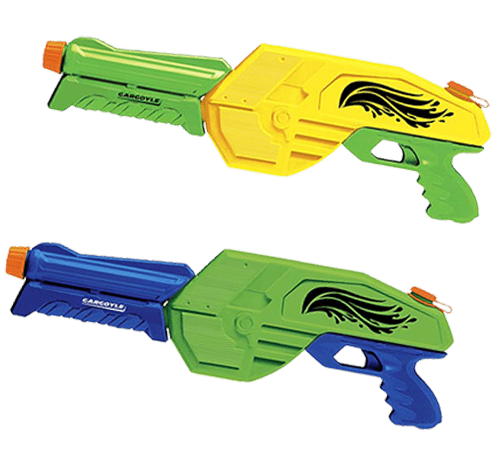 While similar to syringe water guns, the outward pump on models like the Water Warriors Gargoyle pulls water out of a reservoir inside the gun. Limiting the flow rate and adding a larger reservoir increases the time between stops to refill. Each shot still tends to use more water than a piston-action water gun, so the user can’t venture too far away from a source of water.

Models such as the Water Warriors Steady Stream add springs to improve performance and mimic the continuous streams of pressurized water guns. 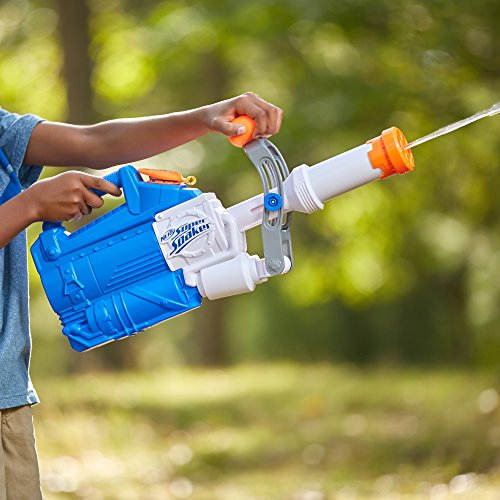 The Soakzooka is one of the most extreme examples of a pump-action reservoir. Instead of a slide, the pumping is done with the handle on top. The circular motion and large tank can launch a massive spray of water with each pull.

So much so that it quickly drains the giant reservoir, but everyone will be soaked by the time it’s empty. 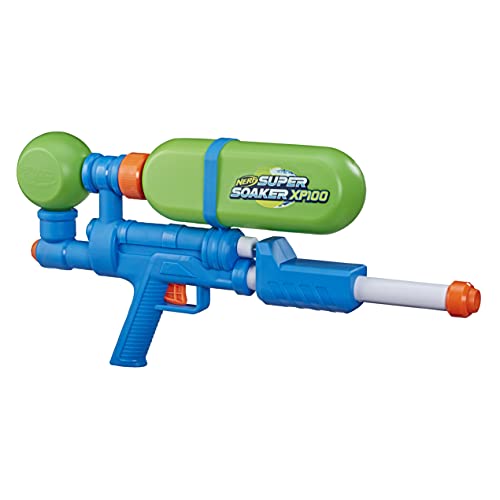 When inventor Lonnie Johnson created his prototype of a pressurized water gun, he knew he had something special. It drastically outperformed the other kids’ basic water guns when his daughter put it to the test. After filing a patent and working his way through interviews and revisions, Johnson’s design would become the iconic Super Soaker.

As Johnson discovered when attempting to produce the design, more parts compared to piston and syringe water guns mean a higher price on the shelves.

Filling the air reservoir takes at least a few pumps, varying depending on the model. The pumping becomes more difficult as the chamber becomes pressurized. Once the pressure is maximized, a press of the trigger releases it to spray the water.

Holding it down can produce a stream for several seconds, but doing short bursts followed by one or two pumps keeps the pressure at a higher level.

Since the original patent ran out, there are more alternatives now than when Super Soakers were first released. Competitors range from cheap knockoffs to legitimate products, and the busier market keeps the price of basic models fairly low.

Super Soaker’s CPS line uses a rubber bladder inside the water gun to keep a steady pressure. The power of the line is the source of urban legends about injuries, but owners have continued to use the product without any confirmed reports.

Unfortunately, Hasbro is not currently selling any products on the CPS line. The patent behind the CPS line expired more recently than the original air-pressurized reservoir in 2016, so there may be more water guns using this design in the near future. Buzz Bee Toy’s Water Warriors line had some CPS models, but

Even with a spare reservoir for a fast replacement, there’s a significant downtime when normal air pressure water guns replace the tank. Adding a second, separated chamber solves the issue of pressure loss when refilling the water reservoir. This design hasn’t seen widespread use, despite the appeal of reducing reload times.

See also  31 Superb Toys for Kids Who Like to Dig 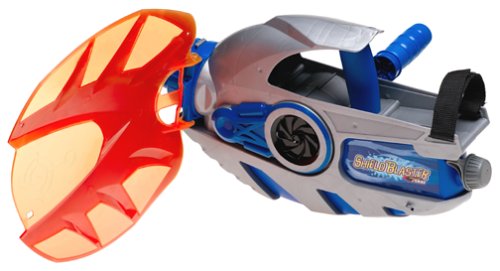 Rotating a handle allows an almost continuous stream of water as the inner workings refill and fire at the same time. Active firing still requires manual labor like a pump-action water gun, but the hand-cranked models skip the reloading delay. Aside from needing to be constantly supplied with kinetic energy, the crank is another potential point of failure.

Current examples include Mattel’s Shield Blaster 2000. Why they have kept it to one line is a mystery, but one potential reason could be the shield’s broad form providing the space and support for the crank mechanisms. The concept is undeniably fun, but seeing more variations on the design will have to wait until the patent on hand-cranked water guns expires. 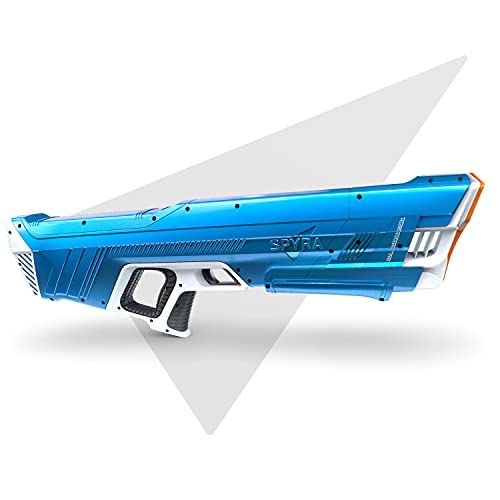 With enough electricity, the right motor, and the right nozzles, the pressure from the water stream goes from fun to dangerous. There’s also the added risk of mixing electricity and water, although that can be mitigated. Engineering can solve both of these problems, but that plus extra parts makes these more expensive.

Needing batteries also increases the cost of operating the water gun over time. With rechargeable batteries, the cost of charging them isn’t too much in the grand scheme of things, but it can add up to significant amounts when using disposable batteries.

For a real-world example, check out the SpyraTwo. The advanced water gun uses a USB-C rechargeable battery for its power source. Each trigger pull puts out an exact amount of water, so there’s no need to guess how many shots are left in the reservoir.

Refilling requires a dip into a source of water, but it’s done automatically. All of the work put into the unique model can be seen in the asking price. 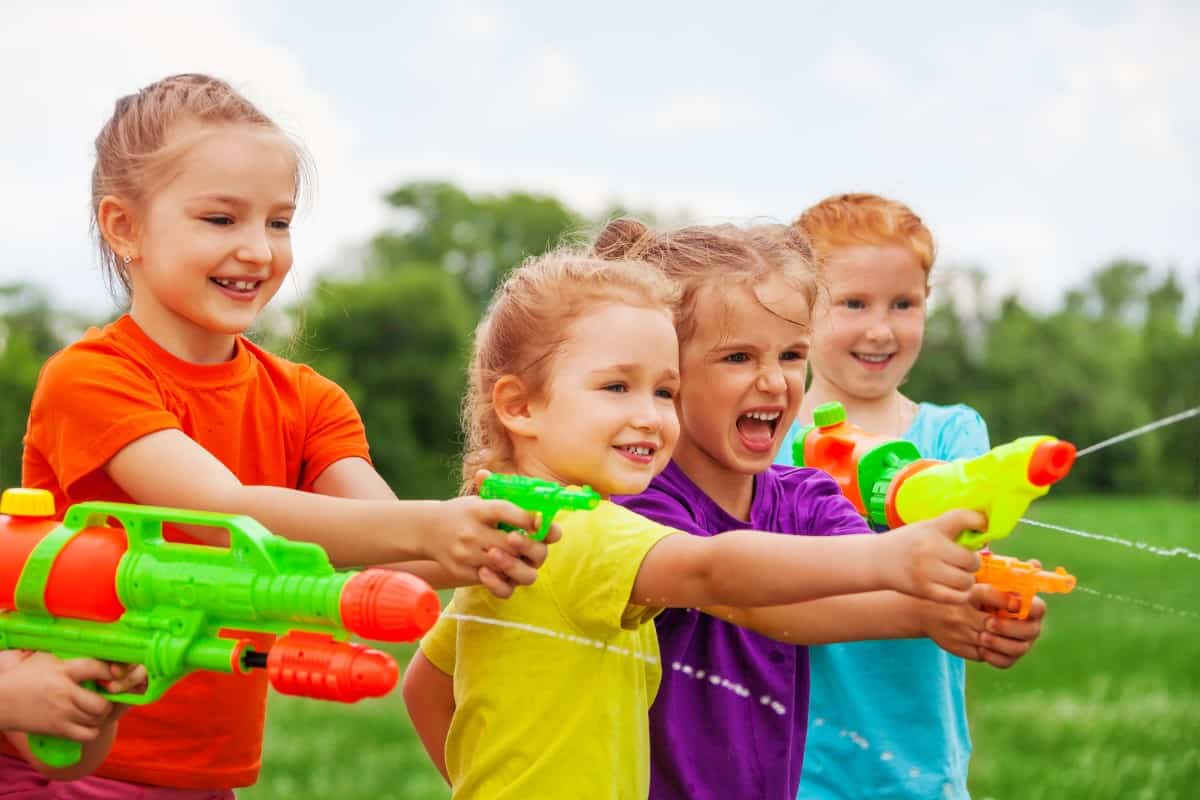 Reservoir capacity is an ever-present issue for water gun design. Putting too much on the water gun makes it awkward to carry, even for two-handed models. The next best solution is a backpack full of water.

A large enough backpack can add several times the capacity, but that weight can be a lot for small bodies. A single liter of water weighs over 2 pounds, and some backpacks can carry over three. When you weigh 40 lbs, adding 6 is significant.

Hard plastic bodies for most backpacks keep the overall weight down while holding up to the force of the sloshing liquids inside. They don’t feel great to land on when making intense dives to dodge away from water balloons, though. A few are made from softer fabrics containing reservoir bladders, like the Max-Infusion backpack from Super Soaker. 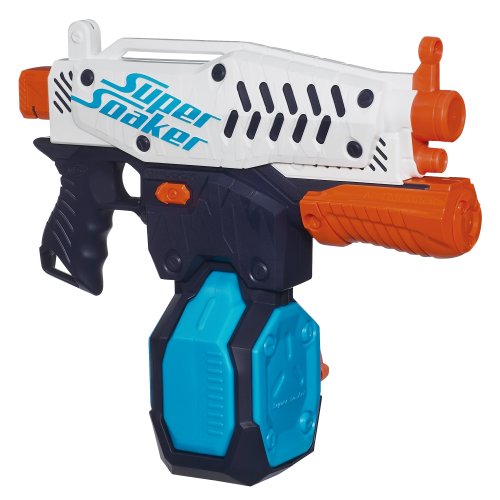 Filling the reservoir of a water gun with cold water can be a welcome refreshment, but icing that much water can take time. The Super Soaker Arctic Shock streamlines the frost enchantment on the water bullets. Dump a few ice cubes into the drum, and every refill gets a chill.

The nozzle controls the shape of the water as it’s pushed out of the water gun. A smaller nozzle will narrow the stream, which increases the pressure to a degree while limiting the flow. A larger nozzle creates a wider stream, and it can handle a higher flow rate.

Some models come with variable or replaceable nozzles that make it easier to see these properties at play in the real world. For example, the CPS 3200 comes with four rotatable options: 5x, 10x, 20x, and the Typhoon grouping of three smaller nozzles. The same basic concept can be seen when placing a thumb over the end of a garden hose. 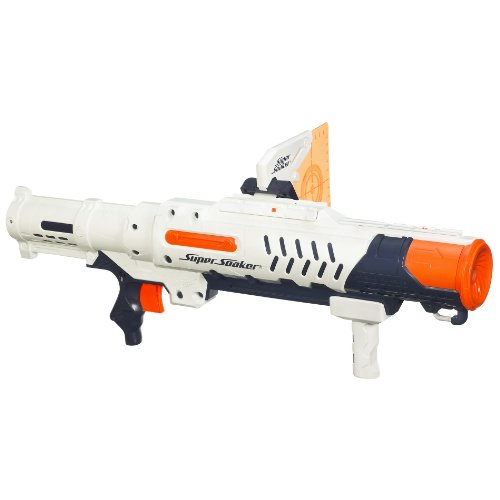 Extreme nozzle variations can have fun results. The Super Soaker HydroCannon has a gigantic payload, covering everything in a wide area with water. It takes 20 pumps per shot, so its novelty kept it from becoming a mainstay. Still, it’s possible to mimic the massive blast with DIY water guns that have wide nozzle openings. 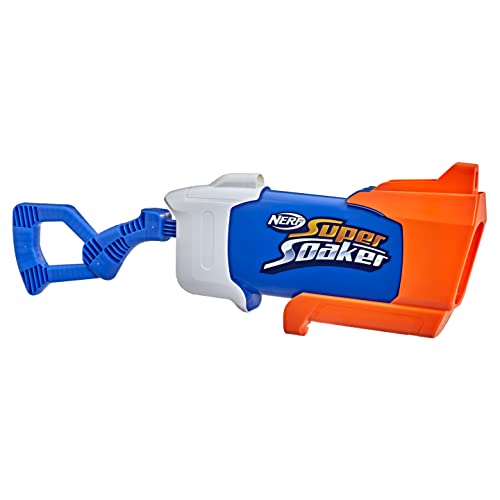 The Super Soaker Rainstorm is a current novelty nozzle option, and its showering spray can achieve adequate distance and pressure. With a resupply bucket for its syringe-style refilling, it makes it easy to fend off a base from multiple water war participants.