There were several popular toy fads throughout the 1990s, and the Furby hits the top of the list. With those big, mechanical eyes and a noble attempt at A.I., the Furby toy quickly found its way into the homes of kids across the United States.

Although you may have been drawn to the Furby, several other toys were like a Furby. These toys also followed the same model as programmable and teachable toys that functioned as robotic pets. Below, let’s look at toys like Furby and understand how they were similar and different from the popular Furby toy.

Contents show
What is a Furby?
Toys Like Furby
Giga Pet
Paro
I-Cybie
Tamagotchi
Hatchimal
Aibo
FAQs
What animal is a Furby based on?
Can you still buy a Furby?
Can you reprogram a Furby?
Are Furbies the same as Hatchimals?
Are Furbies worth anything now?
How do you teach a Furby to talk?

What is a Furby?

While the Furby was not modeled from any one animal, the Furby toys were soft and resembled a small creature with big eyes and tiny ears. The Furby was a robotic toy that a kid could “train” to learn different commands and speech patterns. The more a kid interacted with the interactive toy, the more the Furby could “learn” and pick up other behaviors.

One of the most enjoyable parts about the Furby boom was that the toy could interact with other Furbies. Placing two Furbies nearby could allow the two toys to interact with one another. It was not unusual to see a Furby carry on a conversation with another Furby, allowing them to chatter and even teach each other new phrases and behaviors. Although the Furby was the hot toy through much of the 90s, this toy has since gone out of favor, replaced by better technology and more entertaining toys.

While Furby hit its highest popularity in 1998, with the craze nearing the Cabbage Patch Doll mania, the toy slowly went out of favor in the early 2000s.  The company reissued the interactive toy pet in 2005, adding more technology to the product. Now, the Furby could learn English, mixed together with his own language. The product came with a free Furby app that helped humans translate what their virtual Furblings were saying in Furbish.   Although the revitalized Furby was popular at first, production stopped in 2018.

While the Furby was certainly the hot toy for kids worldwide, several other hot toy options also mimicked the adorable Furby’s same artificial intelligence and learning capabilities. Below, let’s take a look at some toys like Furby and understand how they were similar.

The Giga Pet would eventually grow through various phases of development if the pet was taken care of properly. Improper care could cause the tiny, digital pet to become sick or even die. This popular digital pet monopolized kids, and their time, through much of the 90s.

More modern and technologically advanced, the Paro was a robot designed to work as a therapy animal for people who cannot be near a real, live animal. The Paro responds to touch on the forehead, which activates the robot. The Paro can work and function just like a real animal, and the goal of the robot was to provide the same therapy and beneficial companionship with people as an actual animal can. The robot aims to reduce stress and balance emotion in humans.

See also  5 Toys that are Just Like Polly Pocket 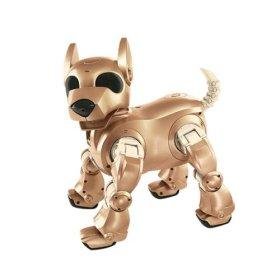 The adorable robotic dog, called I-Cybie, was an interactive and popular toy. Like a natural pet dog, the I-Cybie learned voice commands and tricks and responded to your tone and behavior. The little robotic dog would wag its tail and could even pick itself up if it fell over on its side. Just like the Furby, the I-Cybie worked to mimic human behaviors and would eventually learn new commands and behaviors over time. The I-Cybie was an excellent alternative for kids who could not own a real, live dog.

The first of the digital pets was the Tamagotchi, and its popularity quickly flooded toy stores around the world in the 1990s. This small, digital pet could be kept in a toy the size of a keychain. The Tamagotchi would learn new behaviors and tricks but had to be well-tended and cared for by a watchful owner.

The Hatchimal toy was a popular toy in the past five years that immediately brought back memories of the Furby. Like a Furby toy, the Hatchimal must be well cared for and attended to grow into an adult pet. The Hatchimal could learn new language and behaviors and learn how to walk and perform tricks.

Different from a Furby, the Hatchimal went through various life stages. This development started with the toy pet in an egg form, which required constant care to get the animal to hatch. The Hatchimal eventually grew into an adult pet toy that children could continue to interact with through ongoing attention and interaction.

As an answer to the Furby craze, the Aibo was created. This robotic dog was able to work and function just like a living dog. The Aibo could wag its tail, perform tricks, and much like a Furby, learn new behaviors and commands.

The Aibo was an adorable robotic puppy that would even yap and bark for attention. The Aibo existed until about 2005 when the company discontinued this mechanical toy. Part of the reason for the Aibo popularity downturn was the sky-high prices.

To pay for the automation and A.I. programmed into this toy, buyers had to pay close to $2,000 to own this robotic dog.

What animal is a Furby based on?

Is it an owl? A bear? No, the tiny Pygmy Tarsier is actually the model for the Furby. This little animal is found in the Pacific and throughout Asia and is the model for the popular toy that swept toy shelves in the late 1990s.

Can you still buy a Furby?

Although the Furby has gone through several evolutions, offering newer technology and different features with more recent models, the Furby is no longer available. Hasbro, the company responsible for manufacturing the Furby, stopped making the popular toy in 2018. However, you may still be able to purchase a Hasbro Furby through online sales and auctions.

Can you reprogram a Furby?

Although you cannot reprogram a Furby, it is possible to reset your Furby. This process will allow you to restart your Furby from factory settings, similar to when you first took your Furby out of the package. To reset your Furby, you will need to flip your toy upside down and remove the cover that protects the batteries.

There will be a small button in the upper left hand that will allow you to reset the toy. Press and hold the button for about three seconds, and your lovable Furby will be restored to factory settings.

Are Furbies the same as Hatchimals?

Although the two toys may seem similar, a Hatchimal is completely different from a Furby. The Furby toy would already come hatched and in its adult form. The only input necessary from the child is to teach the Furby new words and behaviors. The Furby could then learn from its owner or other Furbies if they were placed close to another Furby toy.

Comparatively, the Hatchimal is the new toy that goes through various phases of life. Much of the Hatchimal ownership begins with the toy still in the “egg” which the little creature must break out of. By allowing the animal to hatch, the child must work with the Hatchimal, teaching it new behaviors, tricks, and language. Eventually, your little creature will be able to walk and talk as it approaches its adult stage.

Are Furbies worth anything now?

While Furbies may have been able to fetch a pretty penny in the height of the Furby craze, today, many Furbies do not bring in much money at all. Many people will sell their Furby online through various online markets and auctions. Many Frubies will be priced around $50 or less.

How do you teach a Furby to talk?

The Furby will come only speaking “Furbish,” or its own made-up language. One of the appealing features of the Furby is that it can quickly learn new words in your language. Working together and regularly interacting with your Furby is the best way to teach your Furby to talk.

Keep your Furby turned on for several hours every day. Although the toy is marketed as the Furby being able to “learn” language, the truth is that the Furby is pre-programmed with certain words that it will eventually say. The words will appear more frequently when you interact with your Furby.

The longer you keep your toy turned on and engage with it, the quicker it will learn to say English words.