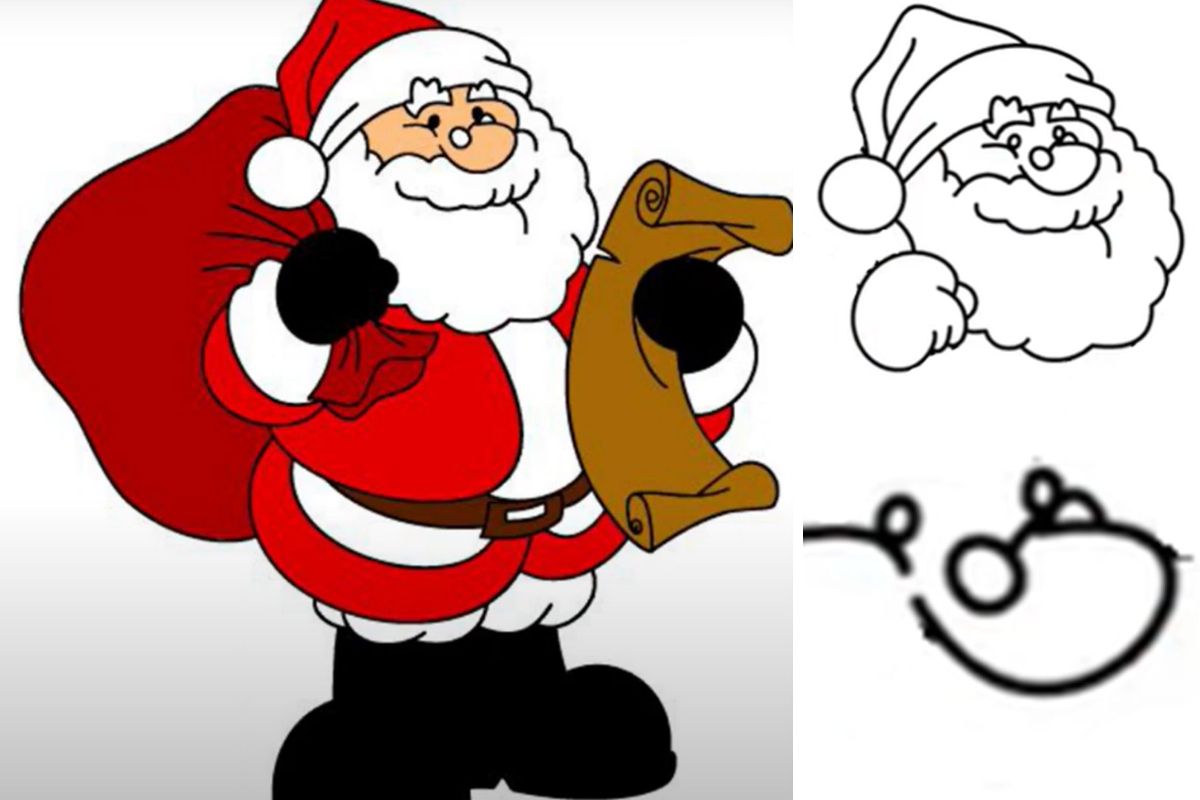 Christmas is near, and you want to learn to draw Santa, so you can send a Christmas card to your friend or granny. But first, did you know Santa is known by different names in different countries? Some popular names are Old St Nick, Saint Nicholas, Kris Kringle, Grandfather Frost, and Father Christmas. Each country has its own name for Santa Clause.

So, remember to be good and good of heart, for Santa Clause has a naughty and nice list that he uses to bring gifts to all the well-behaved children in the world.

Step 1: Start With the Eye and Nose 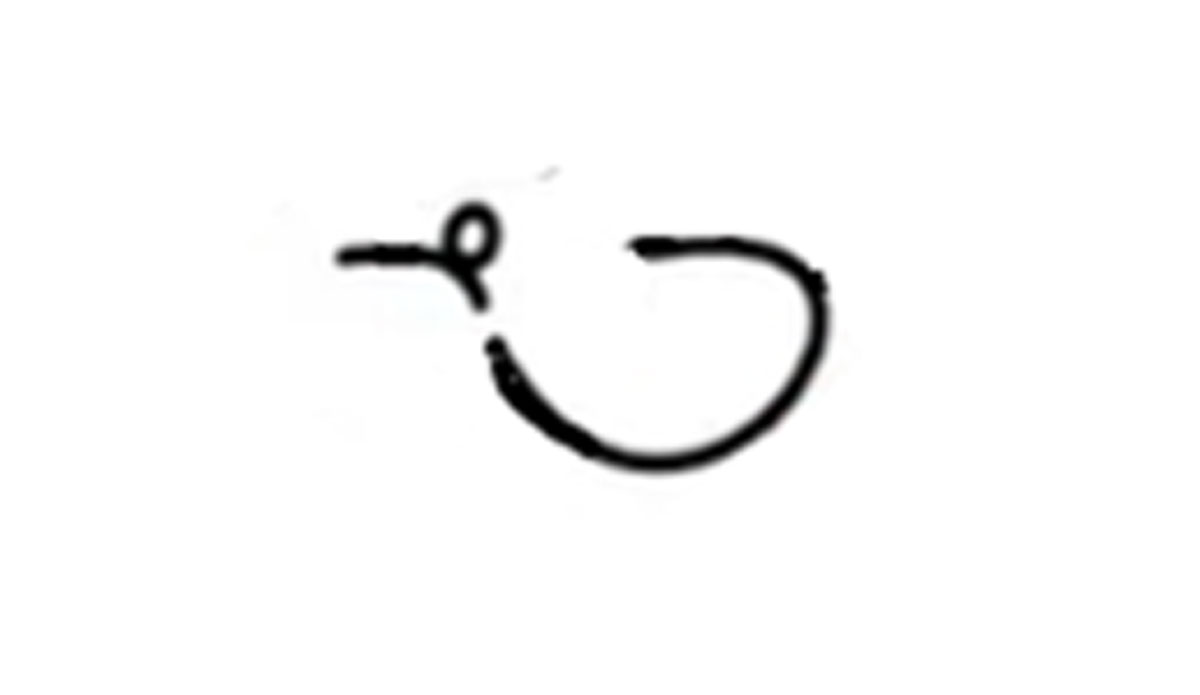 In the middle of your page, draw a long dash with a curved tail going downward, and on the bend, add a pea-sized circle. Next, at the same level as the circle, draw a line towards the right of the page that curves downward to create an incomplete oval shape that ends just below the tail of the first line. 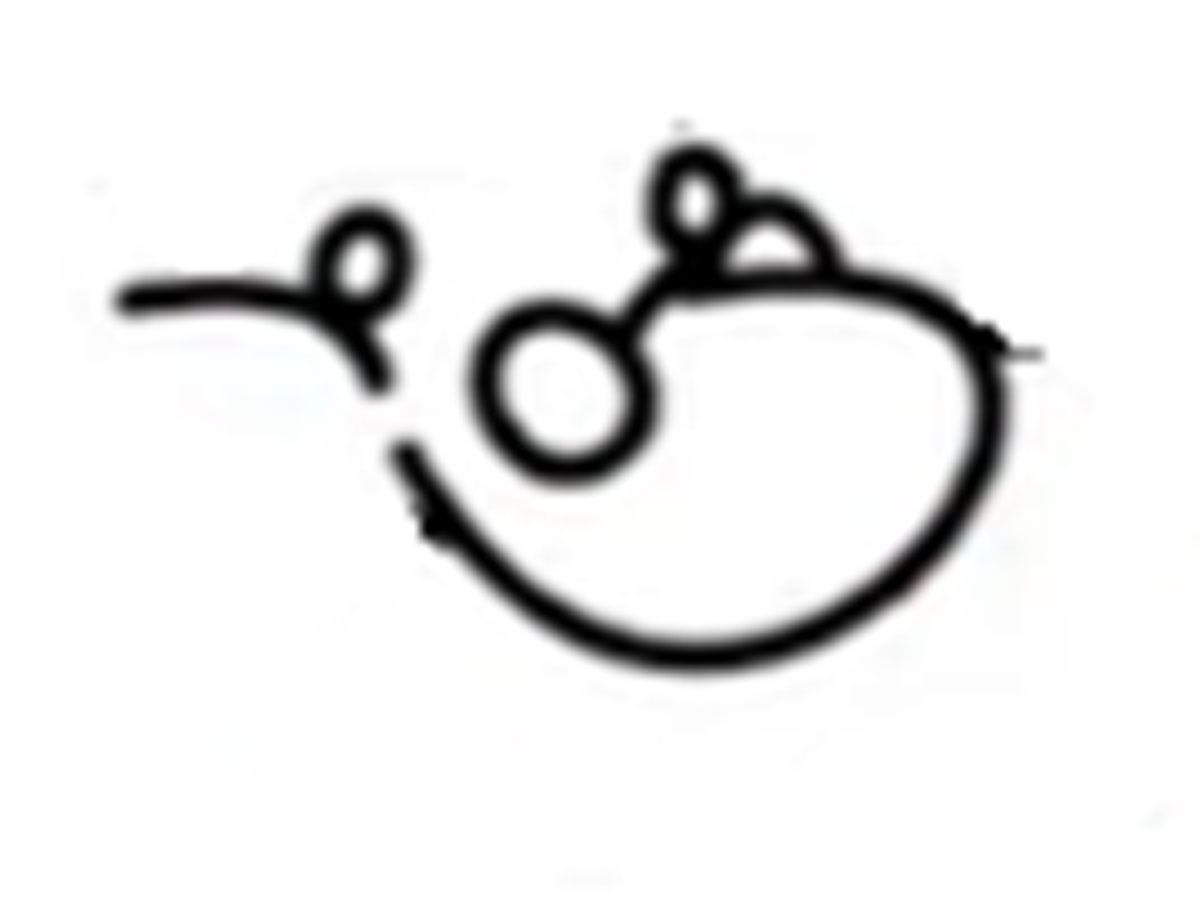 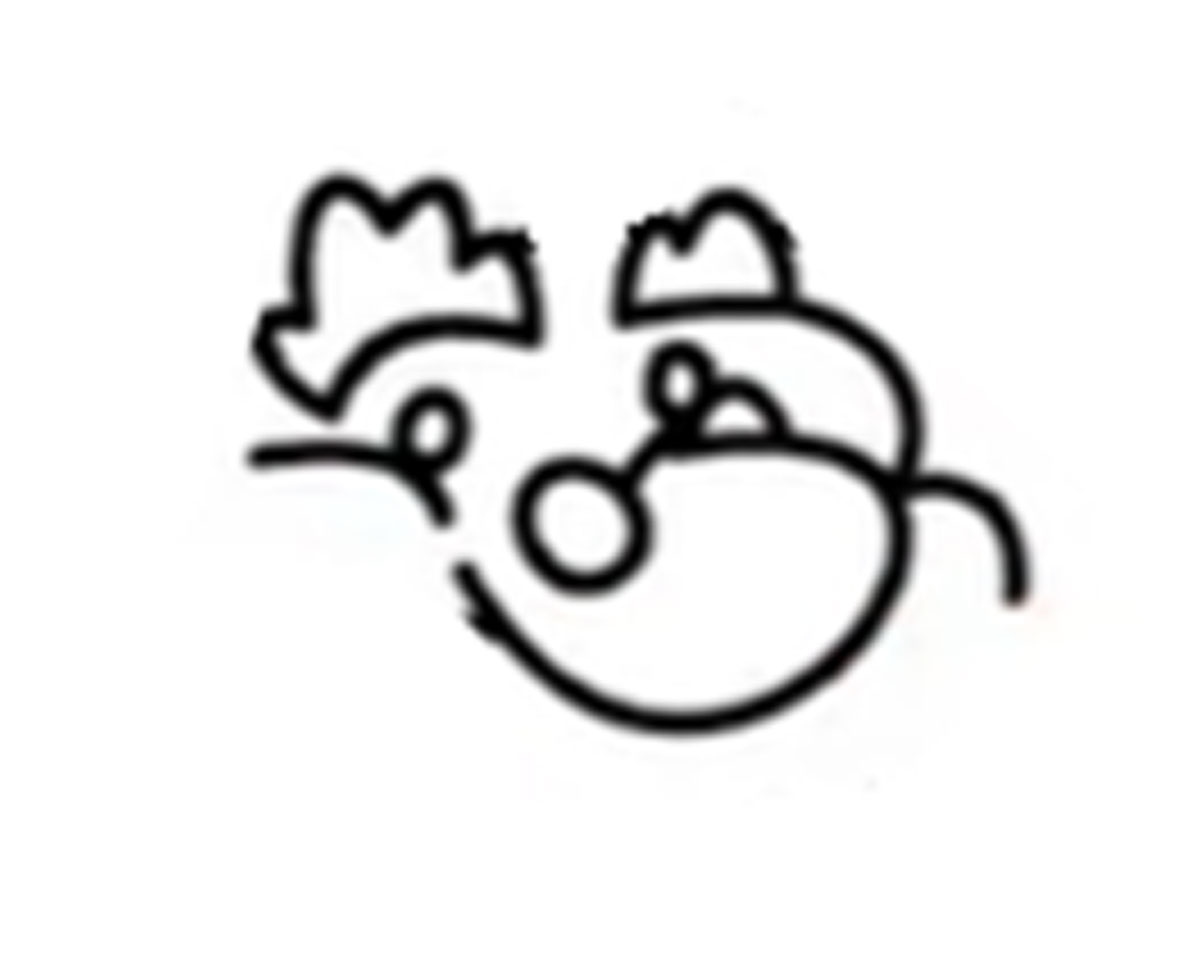 Starting just in front of the oval, which is Santa's nose, draw a slightly curved line that touches the point of the nose, then move out again, curving back over the pea size circle. Continue drawing the line upward in one motion and make an uneven m shape before connecting the lines.

Start the second eyebrow above the center of the two eyes curving over the left eye. Then, draw a line upwards and make four little humps in variable sizes before connecting the ends of the line together.

Step 4: Begin the Top of the Beard 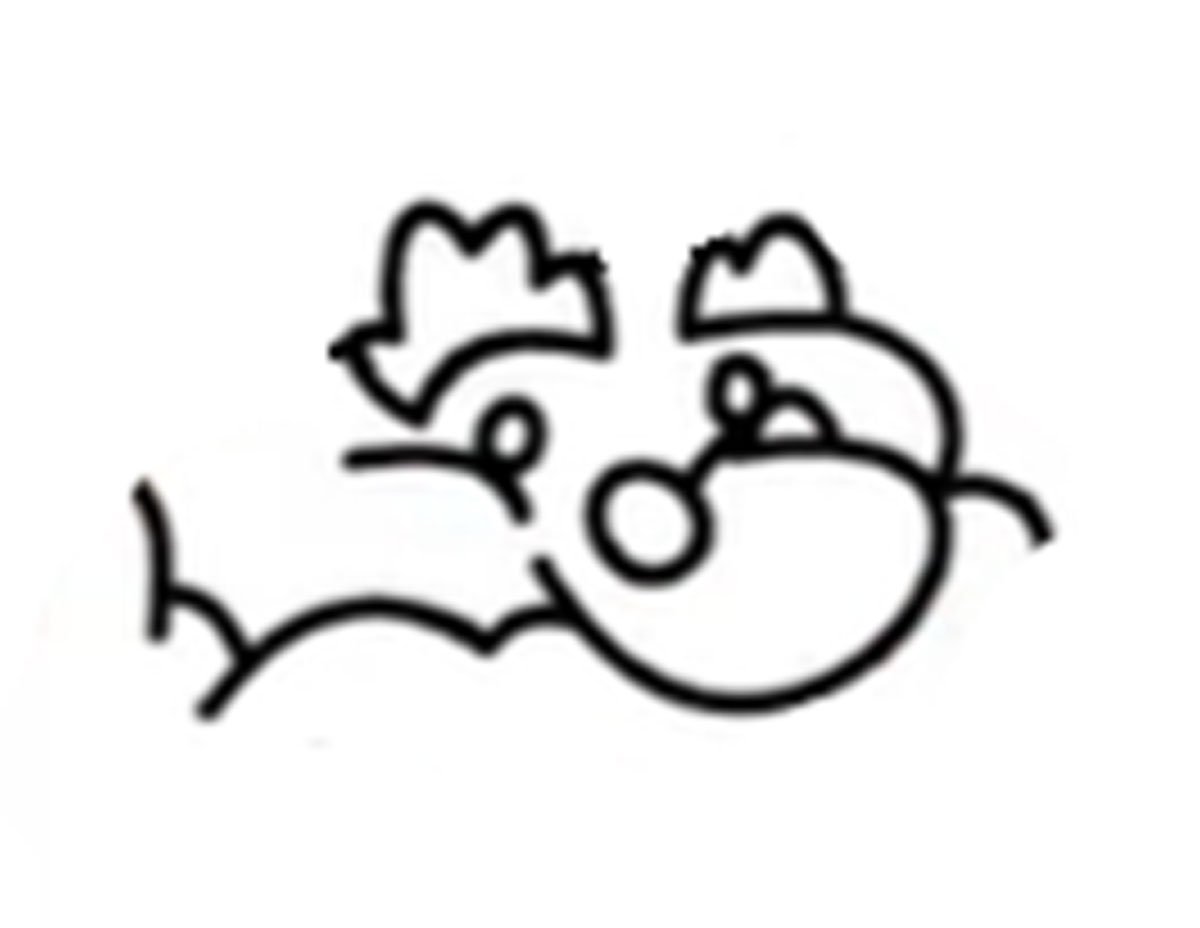 Starting on the left side, draw a short vertical line with a slight bend at the top. Near the bottom of that line, add a short line that connects to a longer line with a big and smaller curve ending just under Santa's nose. 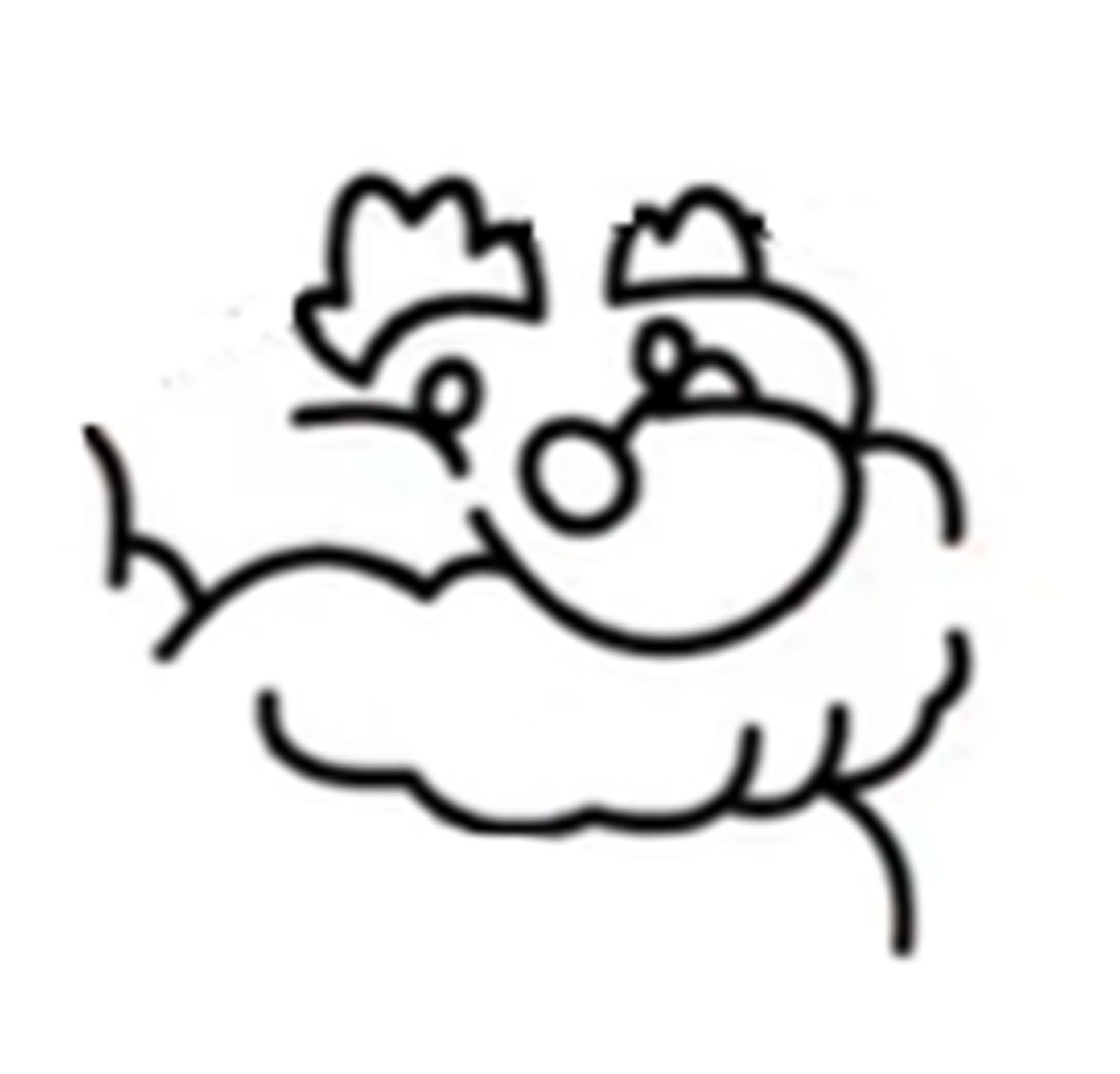 Now add Santa's mouth. Start your line under the nose in line with the eyebrow, and draw a wavy line to the middle of the nose that curves up slightly. Now pull a second line that looks like a backward L. Next, add another wavy line curving upwards to finish off the top line. Finally, add a slightly curved line pulled downward to create the bottom lip. 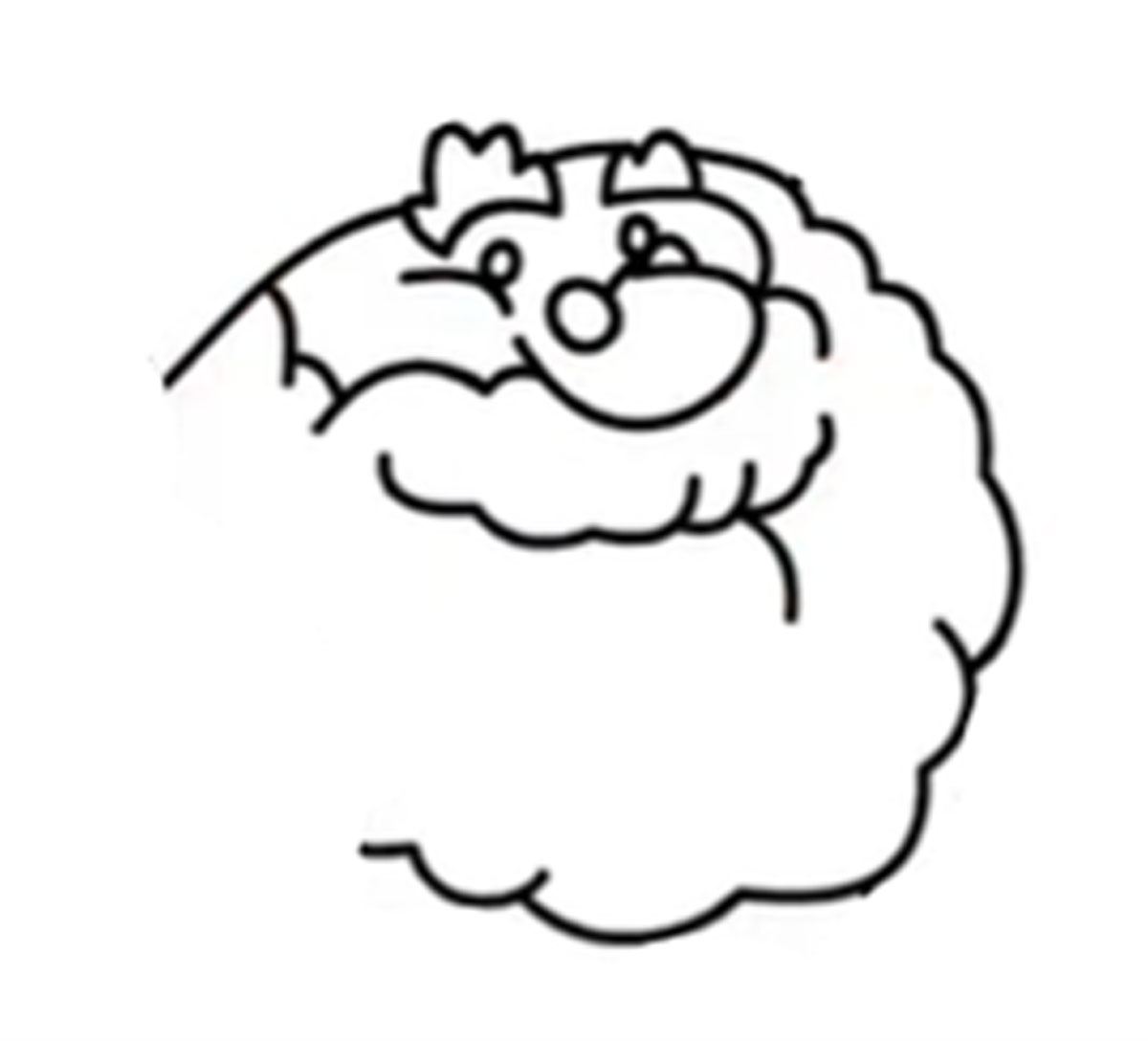 Draw a curved line starting on the left side to the center of the first eyebrow. Next, add a short line between the eyebrows. Finally, add another line after the second eyebrow pulling the shape downwards, creating a big half-circle with a wavy pattern for Santa's beard. Congrats, you just finished drawing Santa's face. 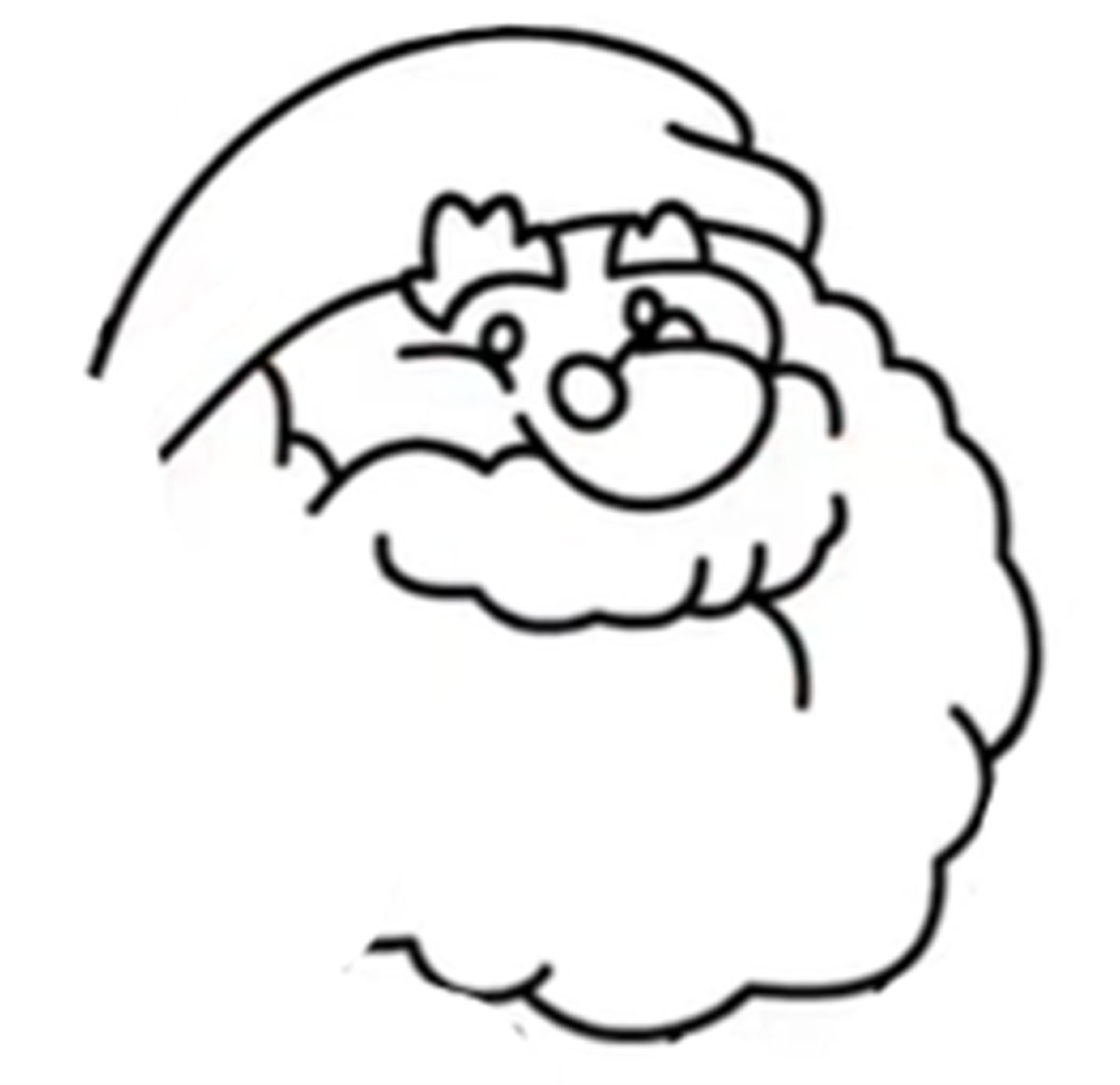 On the right side, from the corner of the line where the beard starts, pull a line-up, sharply curving it to the left. In the middle of that line, draw a long-curved line that ends in line with the bottom line of the hat band.

Step 8: Drawing the Top of the Hat 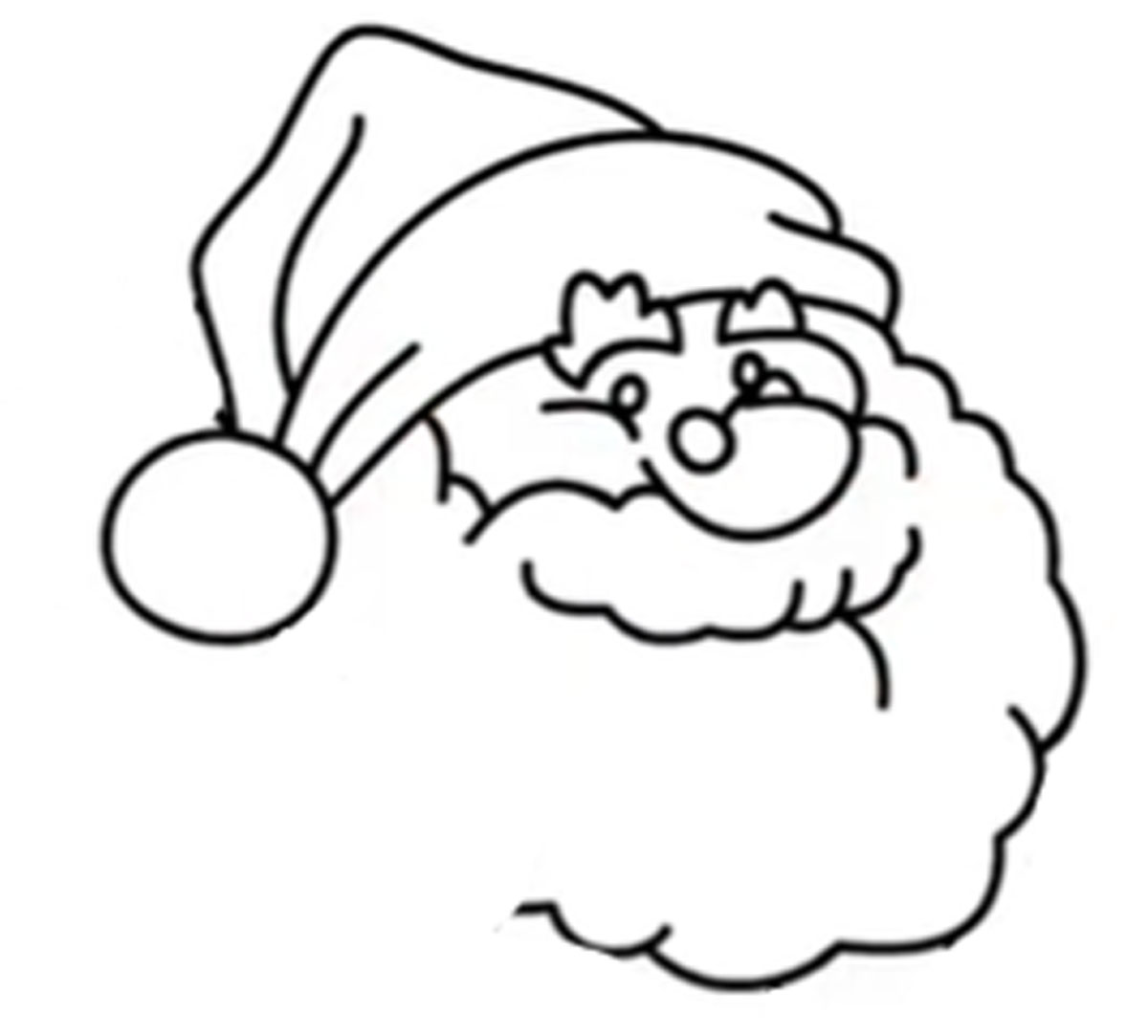 Add the top of the hat by pulling a line angled slightly upward, drawing it towards the left, making a small bump, and pulling your line back down. Draw a circle closing off all the lines, and draw a short line in the middle of the headband to create a crease in the hat. Add one last line to finish off the shape of the hat. 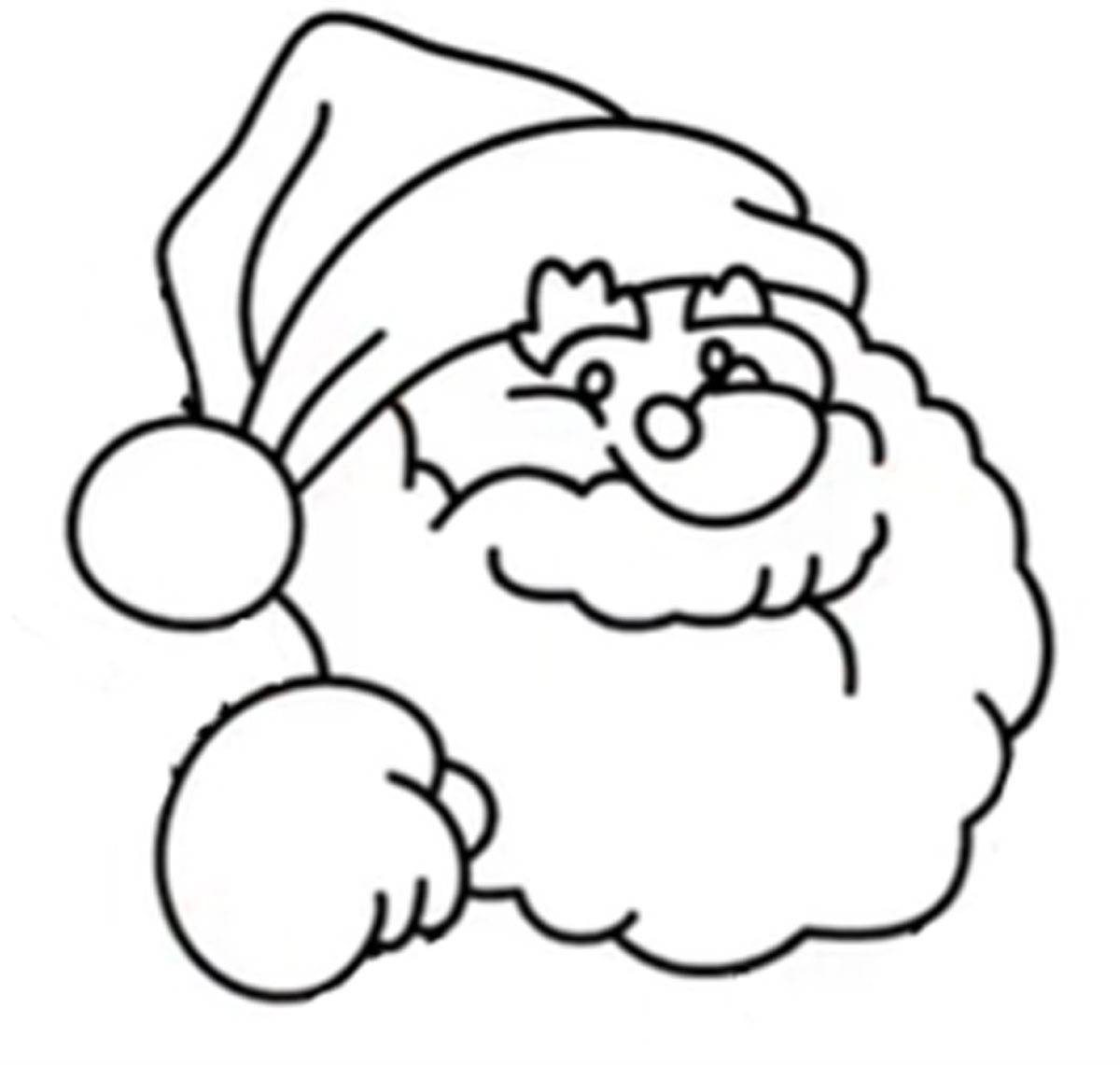 Add an incomplete circle under the pom-pom of the hat. Next, draw a curved line, starting just inside the circle at the top opening, and then add a smaller line closing off the circle. Finally, add a half circle at the top of the open loop and then curve the line to join them, and there you have Santa's hand. 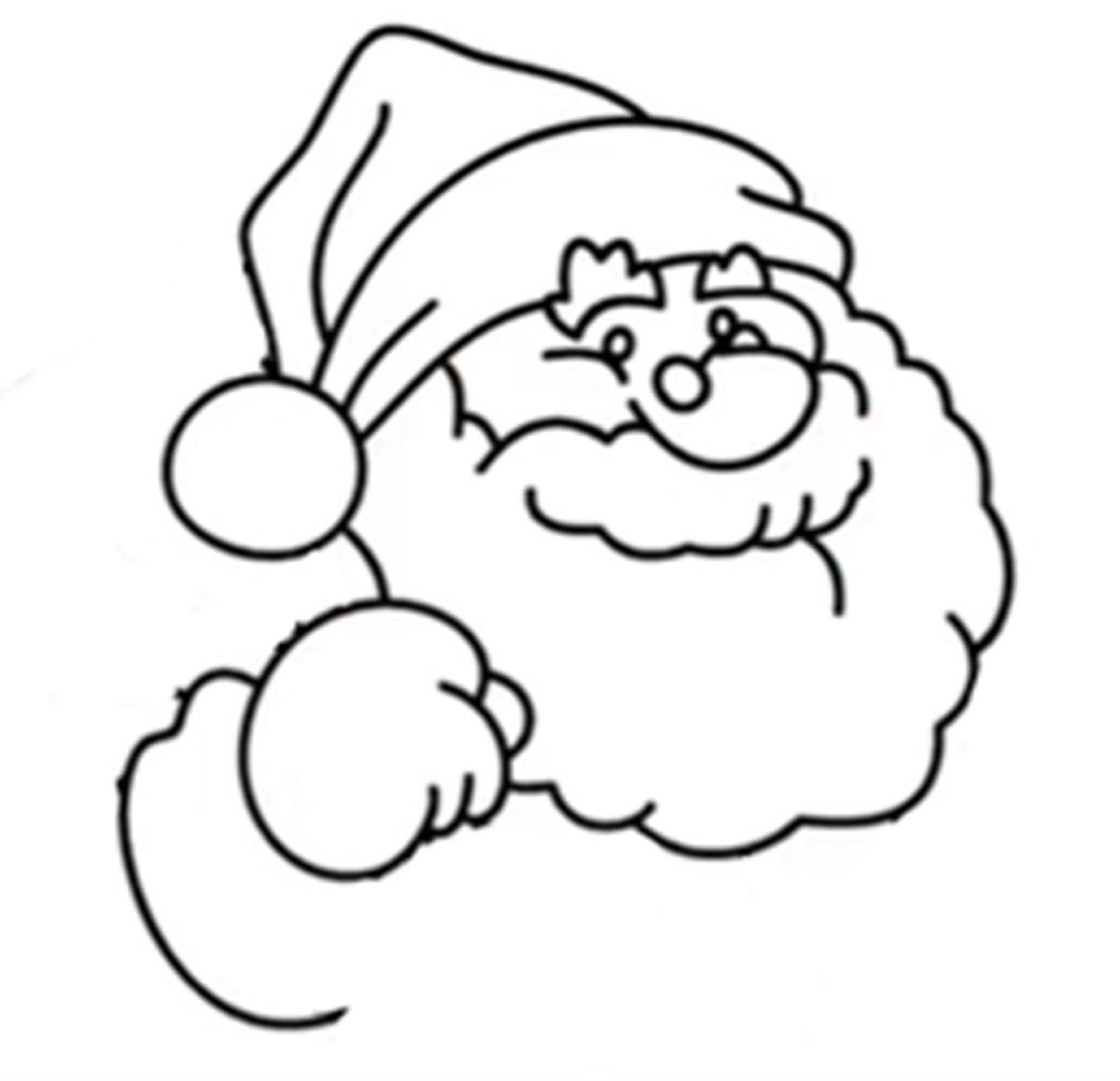 Add another circle from the middle of the hand, adding a small squiggle on the top left side of the circle. Don't complete the circle, stopping underneath the hand. 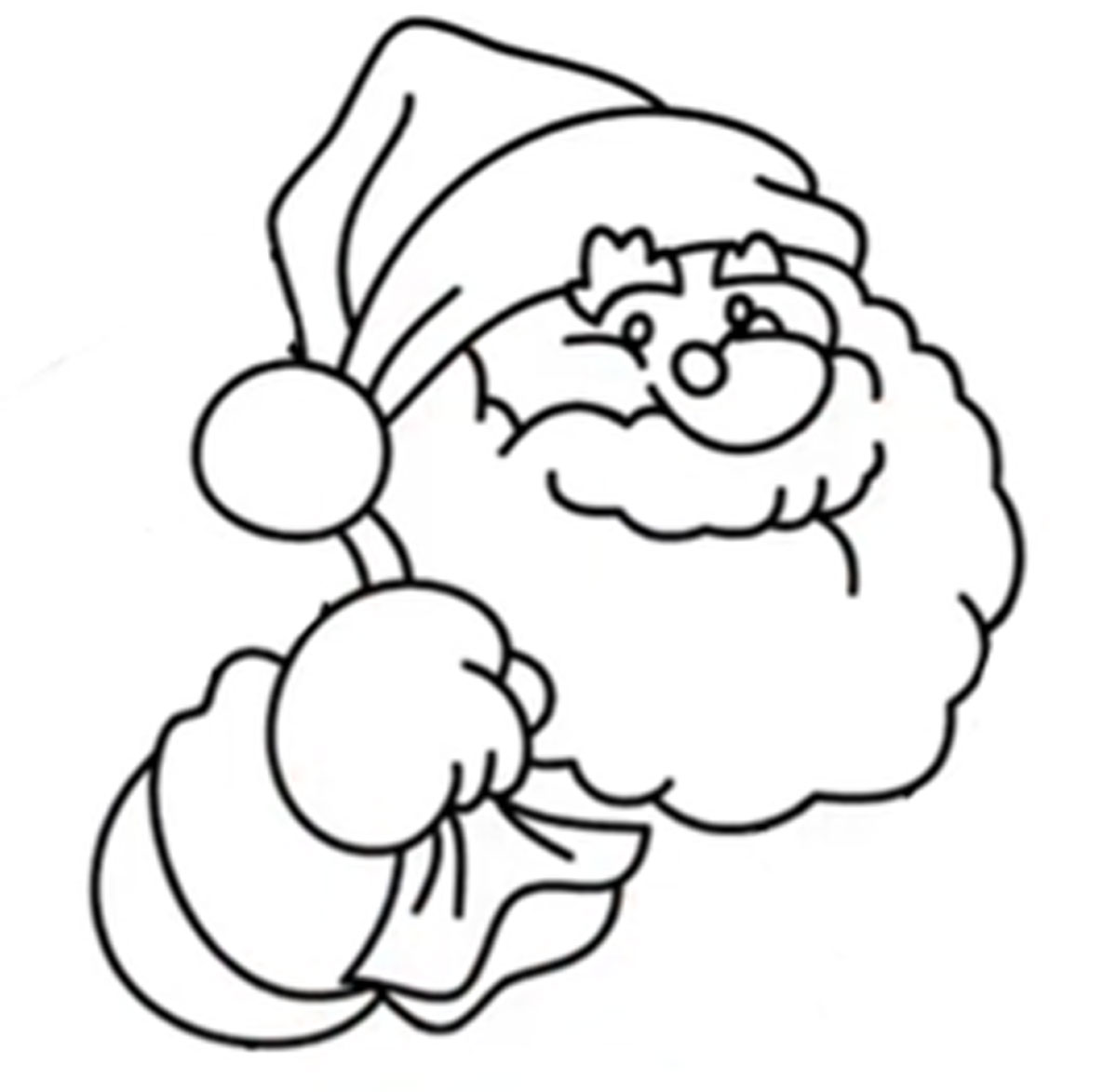 Let's add the end of the bag to Santa's hand. From Santa's hand, draw a line down to the cuff line and then pull it to the right with a wavy motion till you get just under the beard. Then, pull the line back upward at an angle until you reach the hand.

Next, add dimensions to the bag opening by adding another wavy line from one corner to the next. Follow that line by making a small circular diagram around the cuff.

Add three lines to the bag to create the look of it bunched in hand. 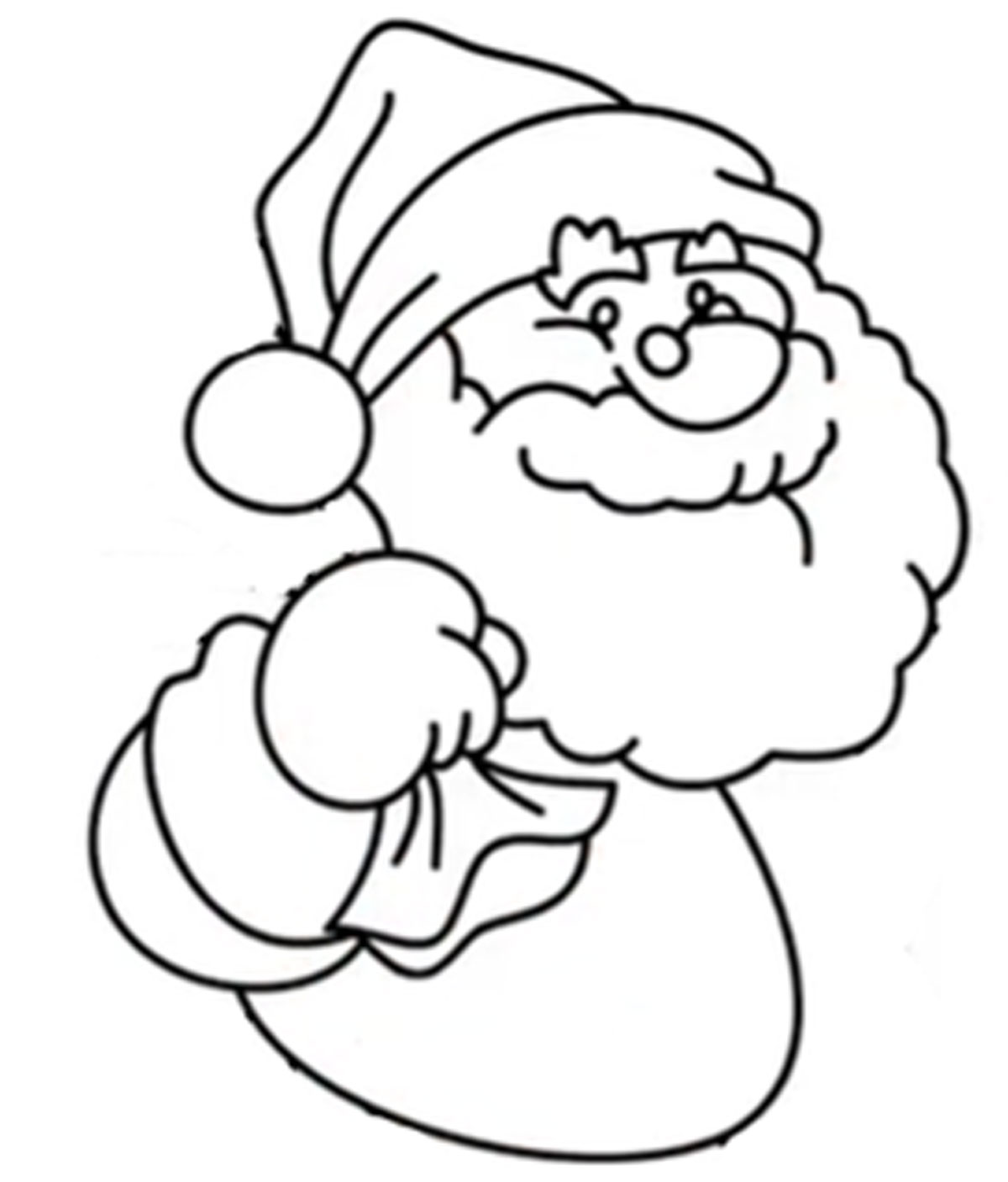 Start to the left of Santa below the egg-shaped belly. From a point, make a circle and slowly make it bigger, then p+ull the line upwards with a curve. Make a small V-like indent at the side of the beard and continue upward. End it off by creating a circle and making it smaller and smaller. 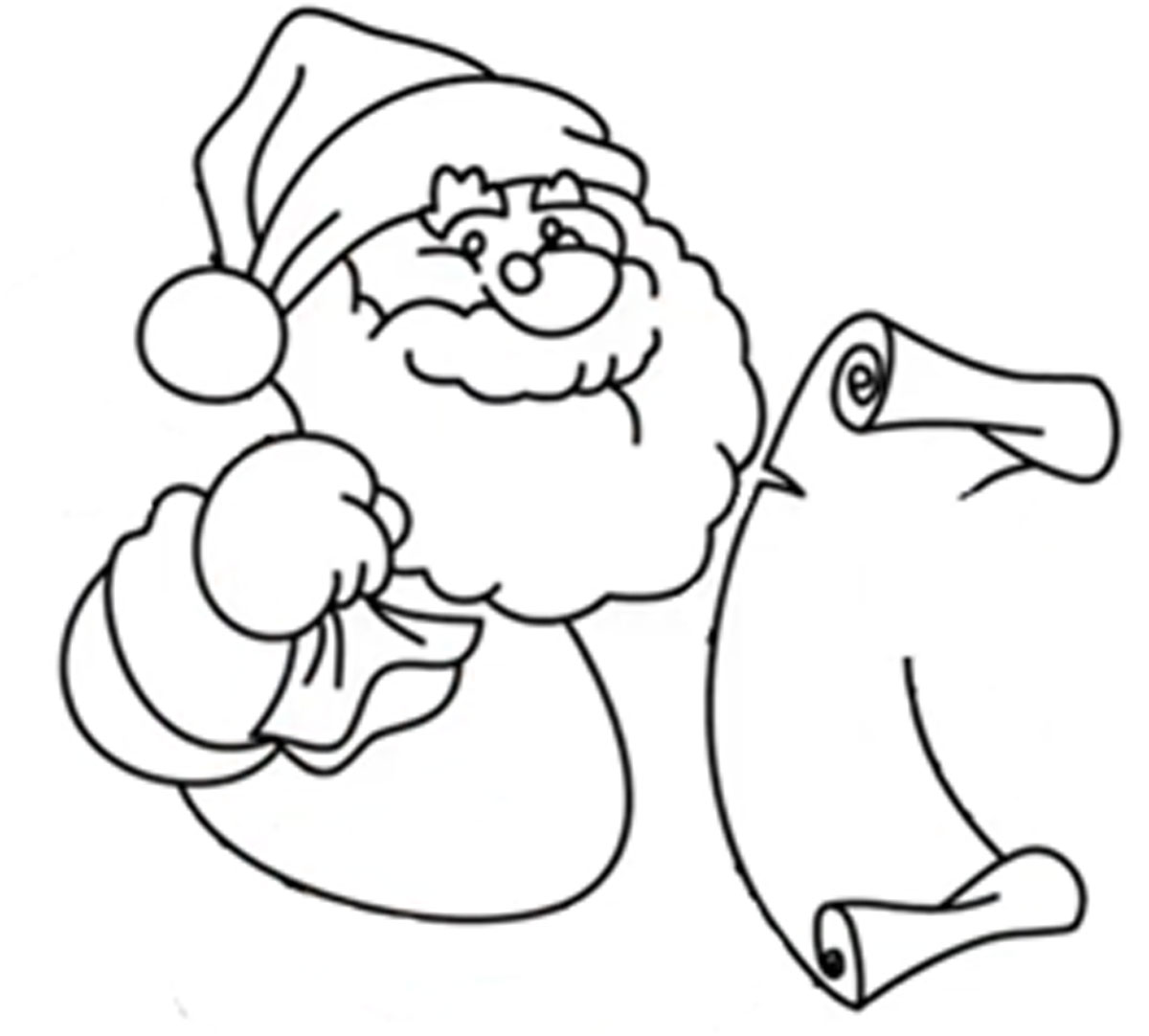 Second, draw a short line downward from the left side of the top roll, leave a gap and continue with the line.

Create a bottom roll by starting a line in the middle, drawing towards the left, making a U shape, and curving back to the swirl, continuing the line back to the bottom of the roll. Next, close off the roll by adding a small curved line from the roll to your first line on the bottom roll.

From the gap you left in the scroll, draw a circle from the bottom of the opening through to the middle of the scroll, looping it without closing the loop. Then, end the line underneath where you began your circle shape.

In the middle of the scroll, draw a curved line that joins the edge of the circle shape.

Next, draw a part circle under your circle shape, followed by a small line forming a small triangle between the scroll and the cuff of Santa's arm.

Now finish off Santa's belly by adding another egg shape on the left of the scroll. Remember the small line at the V shape in the scroll to finish off the body.

Step 16: Give Santa His Belt and the Bottom of His Coat 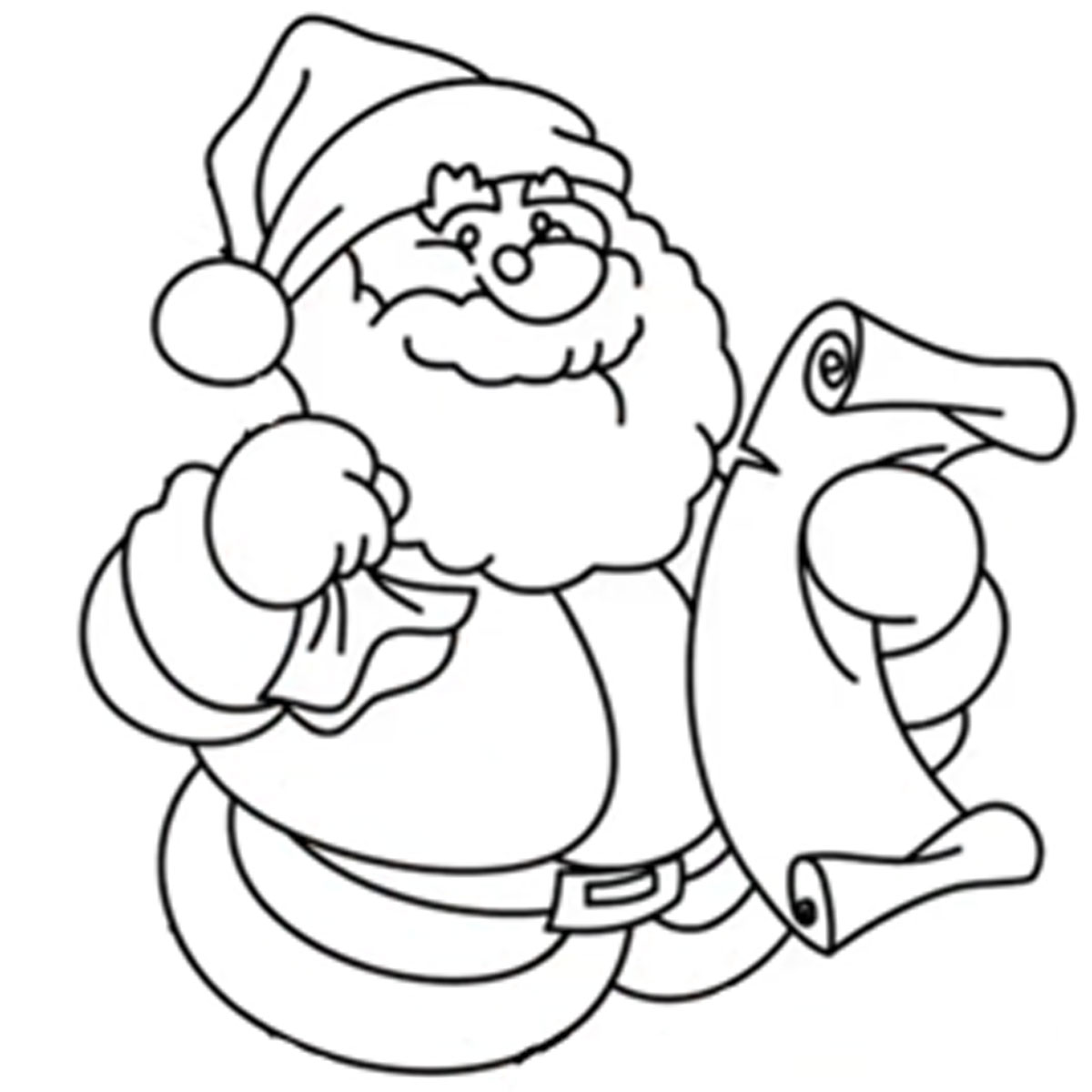 Finish the look of the belt by drawing a line from the left side of the rectangle and adding a smaller rectangle inside the big rectangle.

Add a curved line to finish off the right side of the coat.

Step 17: Give Santa Some Pants 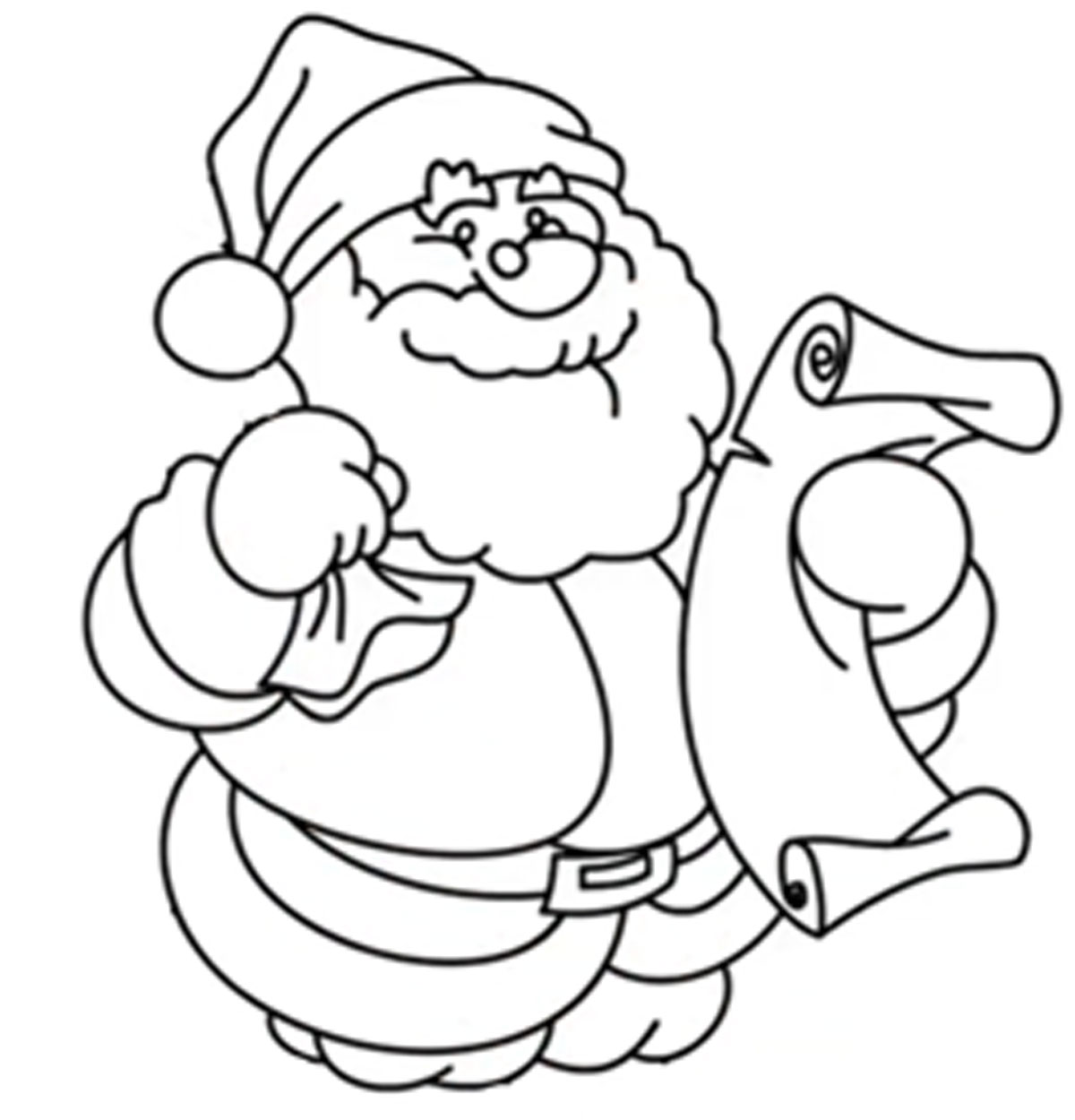 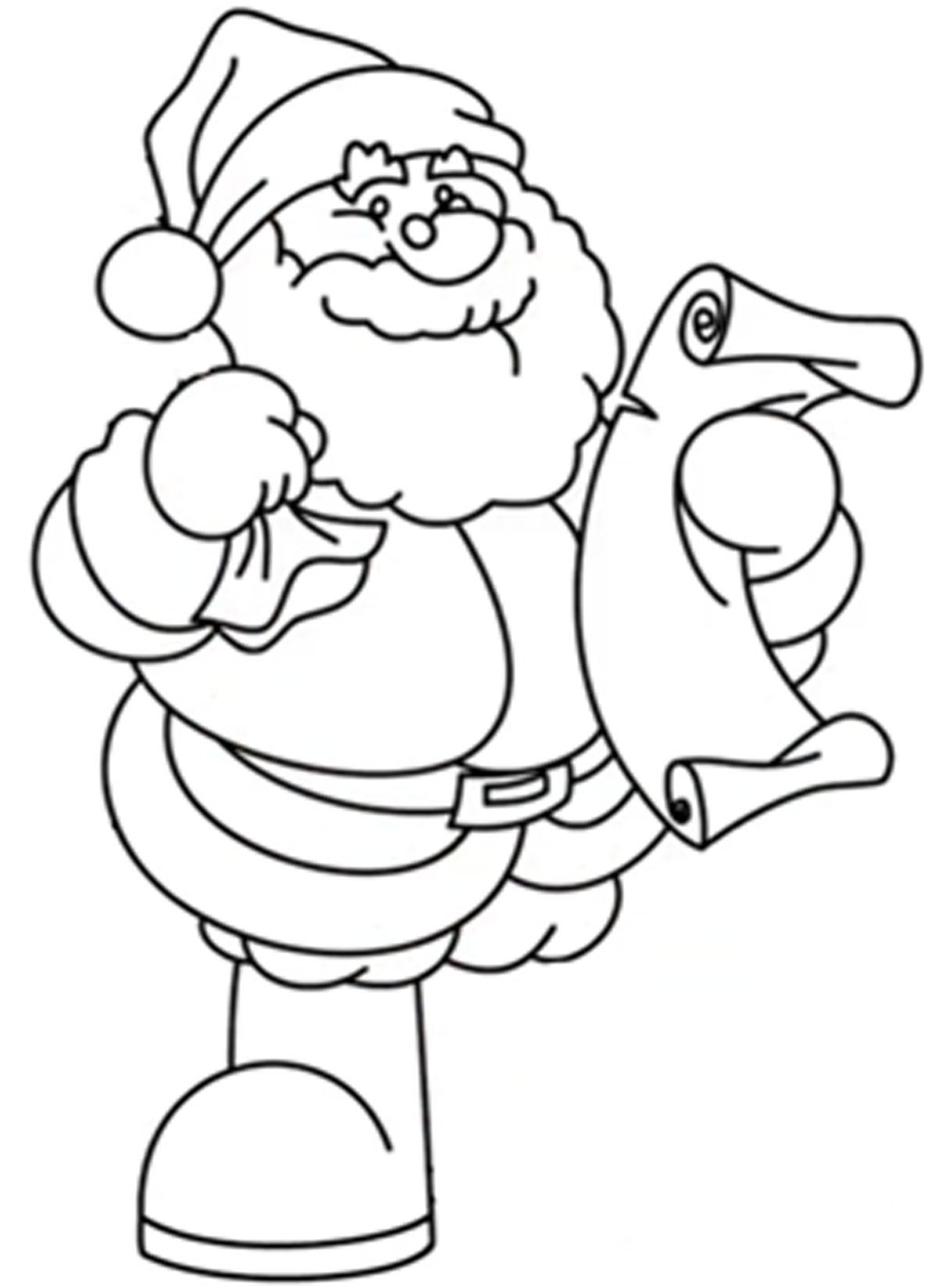 Start by pulling a straight line down from the inside of the cloud-like shaped pants. Then draw a curved line to the left, turn your pen upwards and create a big half circle.

Above the curved line, draw a second curved line to make the sole of the boot.

Now from the middle of the half-circle, pull a line straight up to the outside of the pants. 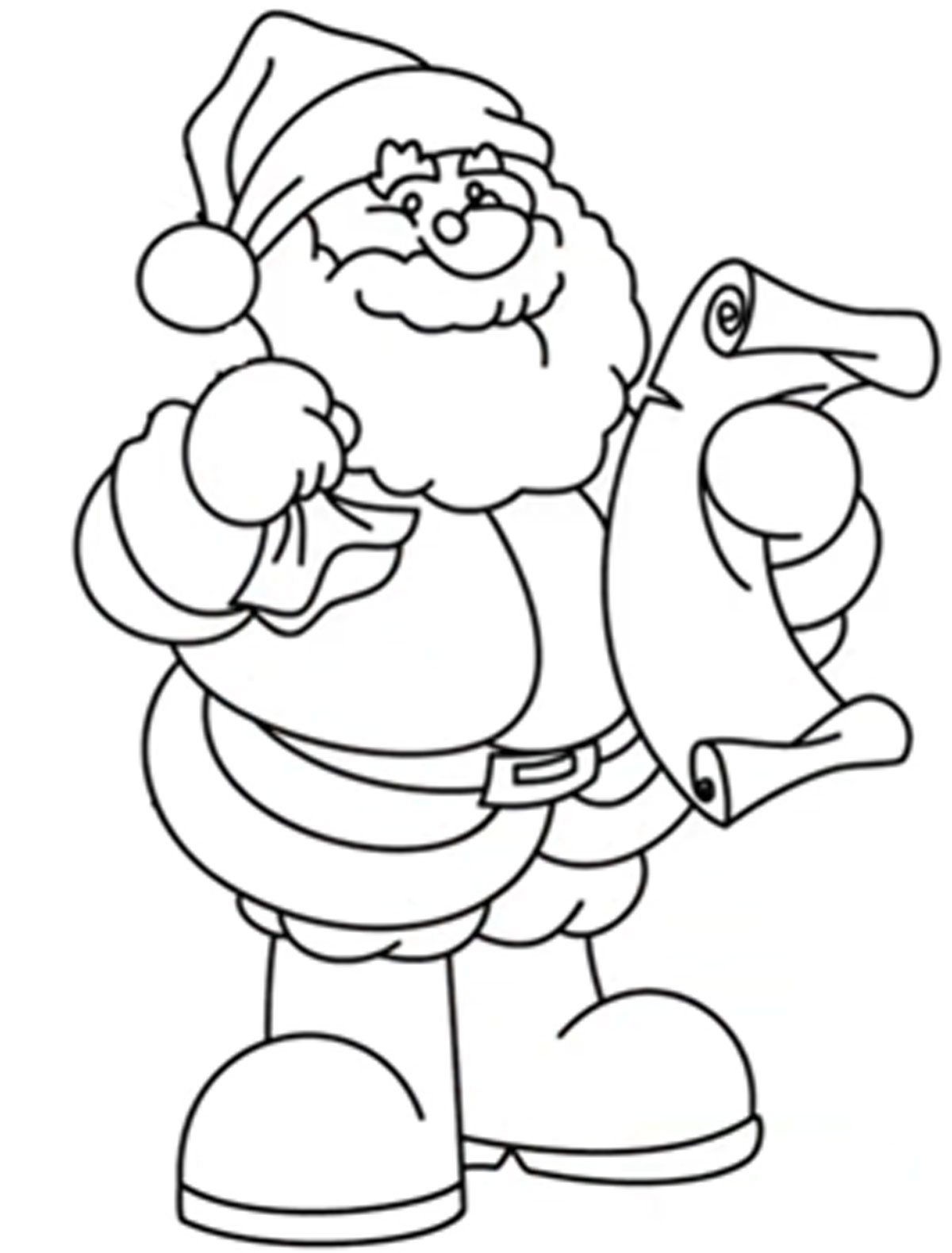 Draw your second boot by pulling a short line on the right side of the pants downward. Makes a half-circle shape at a slight angle, and then curve your line towards the first boot.

Under the line you just made, draw a second line following the same shape with an upside-down V to create the heal and curve your line up to join your semi-circle.

Step 20: Don’t Forget the Bag With All the Presents 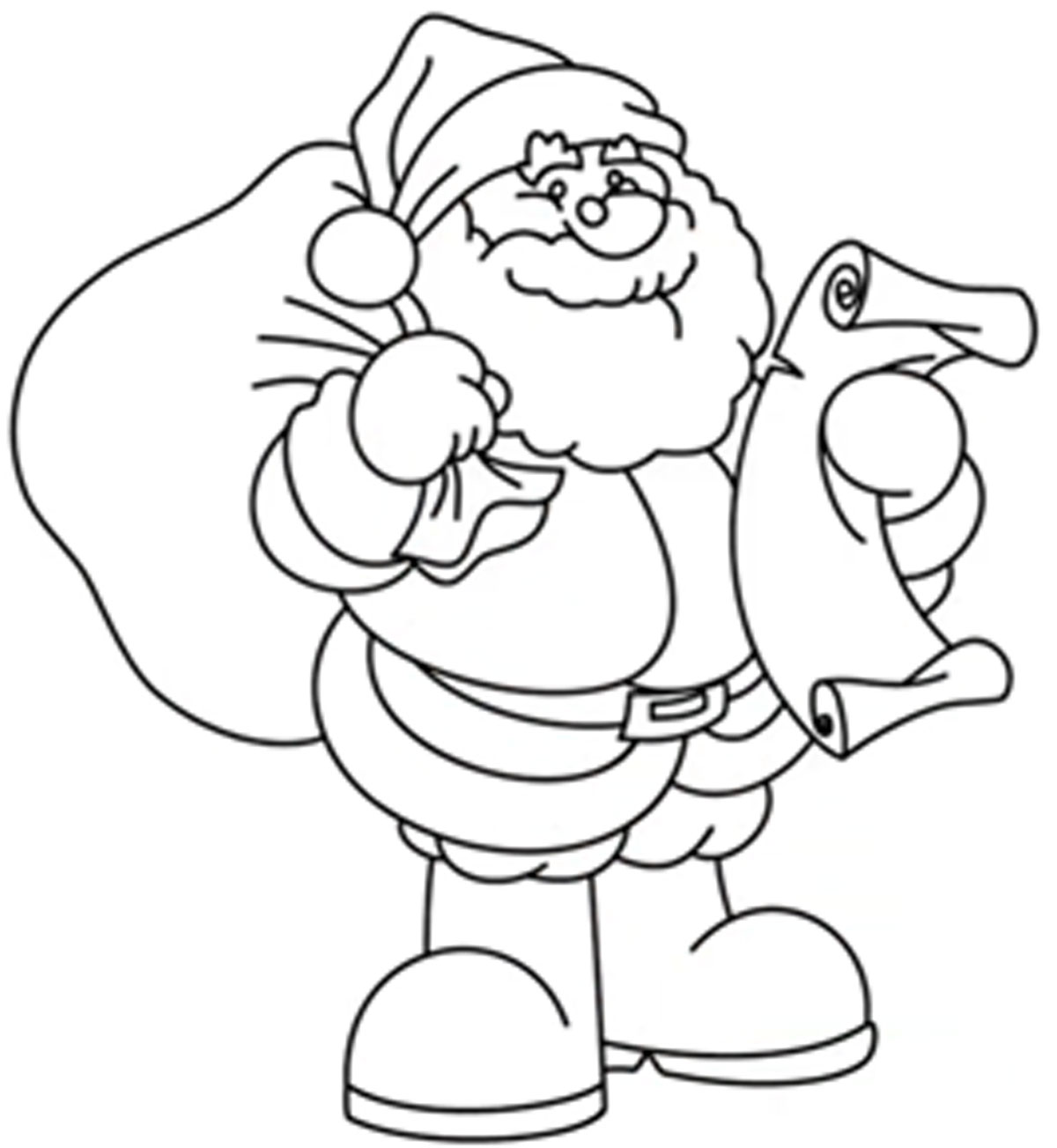 Draw a big half circle on Santa's back that is not too perfectly round but has some bumps. Finish the half-circle off just above the pom-pom of Santa's hat.

Now add some lines where Santa’s hand is holding the bag to add the effect that it is bunched up and remember the tiny line from just above the pom-pom.

Congratulations, you have drawn Santa Clause with a bag full of presents. Are you on his good list? 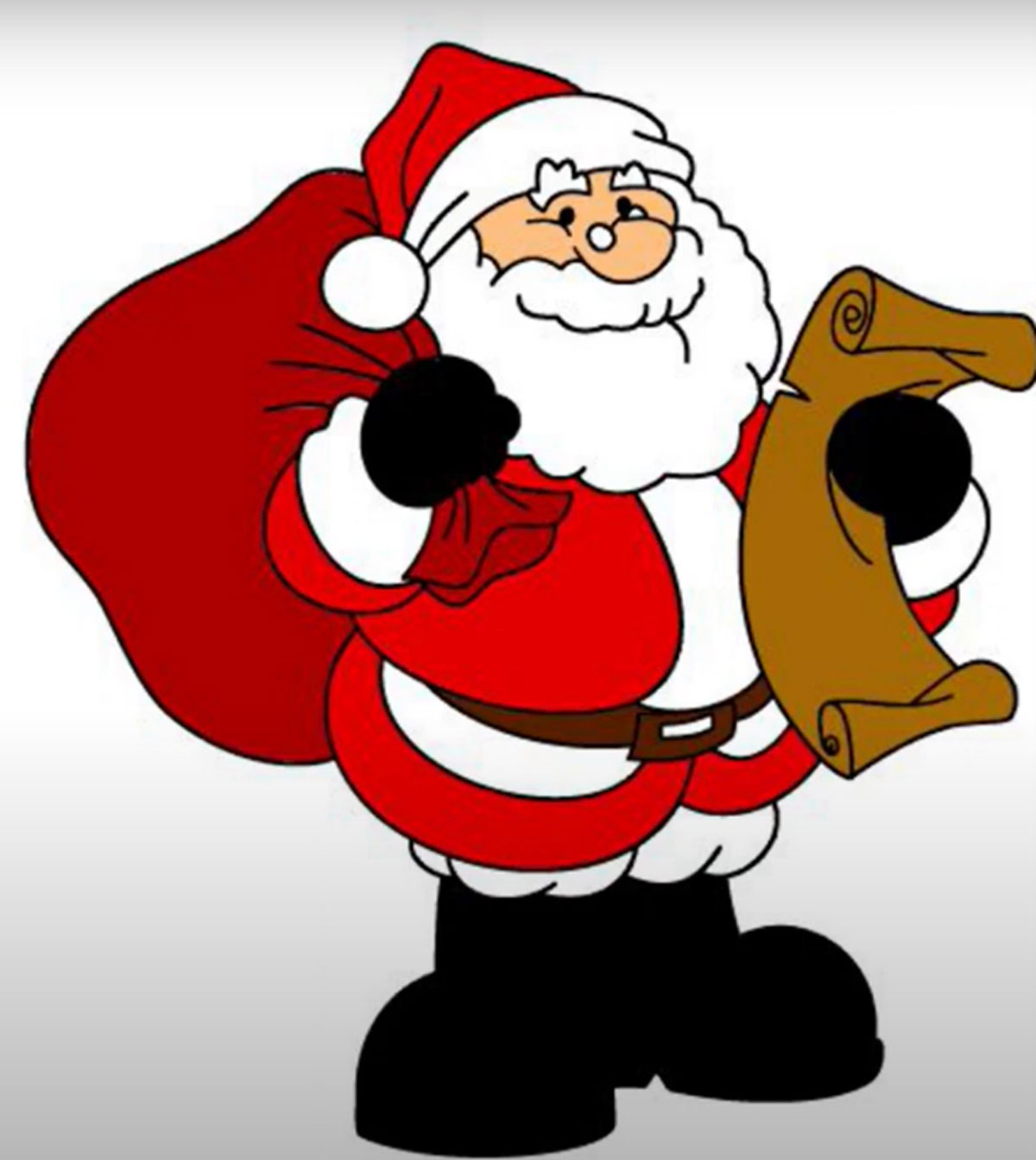 Now you can finish off your drawing of Santa by coloring in your picture. You can follow the same colors we used or be creative and give Santa a makeover.