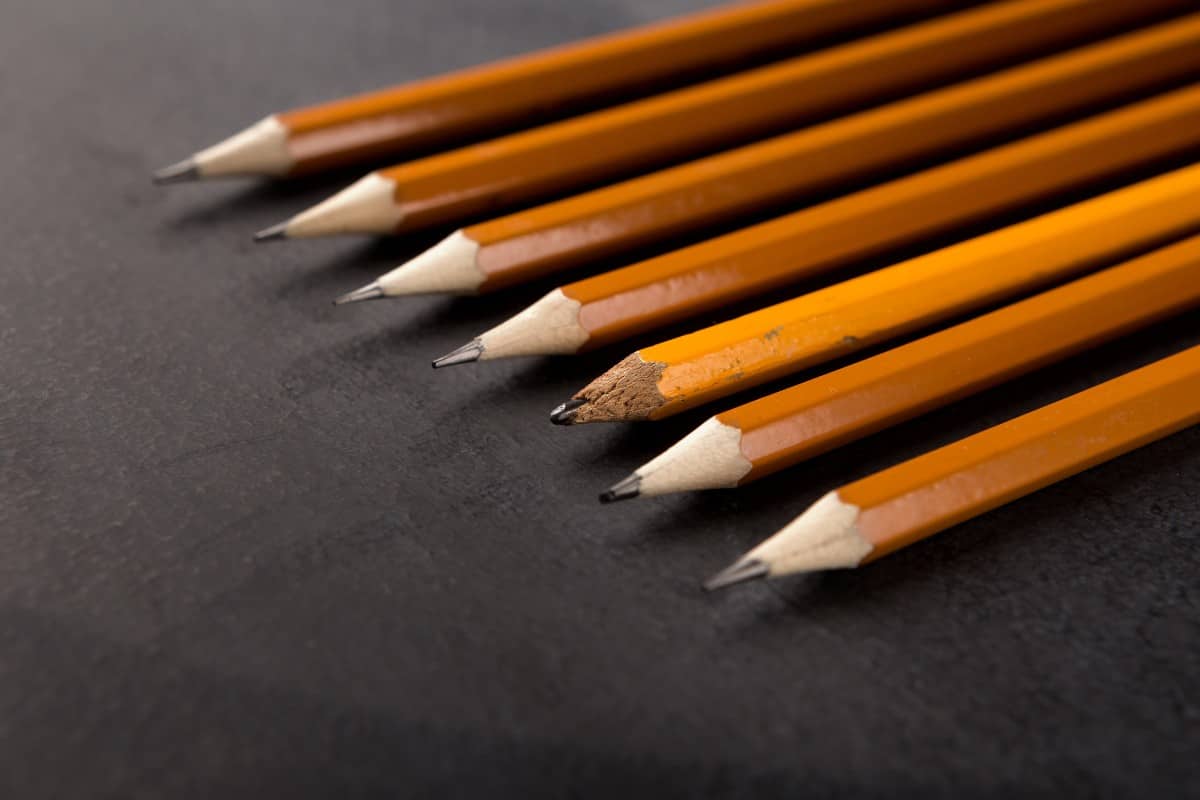 A pencil is one of the most imperative writing instruments in the world. It is also regarded as one of the oldest writing utensils that date back to prehistoric times. Another thing that makes pencils remarkable to use is that they are resistant to moisture, natural aging, ultraviolet radiation, and most chemicals.

However, not everyone is conversant with how pencils are made. Pencils require a great masterpiece in their production as the process involves the conversion of wood to pencils. In this article, we have elaborated more on how pencils are made, what materials are used, and the types of pencils available.

Contents show
How are Pencils Made? What are They Made of?
What is a Pencil Made of?
Types of Pencils
Graphite
Solid
Liquid
Charcoal
Carbon
Grease
The Process of Making a Pencil
1. Cut the Wood
2. Create Grooves in the Wood
3. Glue the Grooves
4. Bake the Graphite
5. Sandwich the Graphite in the Wood Slate
6. Cut the Sandwich into Pieces
7. The Lacquer Shower
8. Add an Eraser
9. Packaging
Bottom Line

How are Pencils Made? What are They Made of? 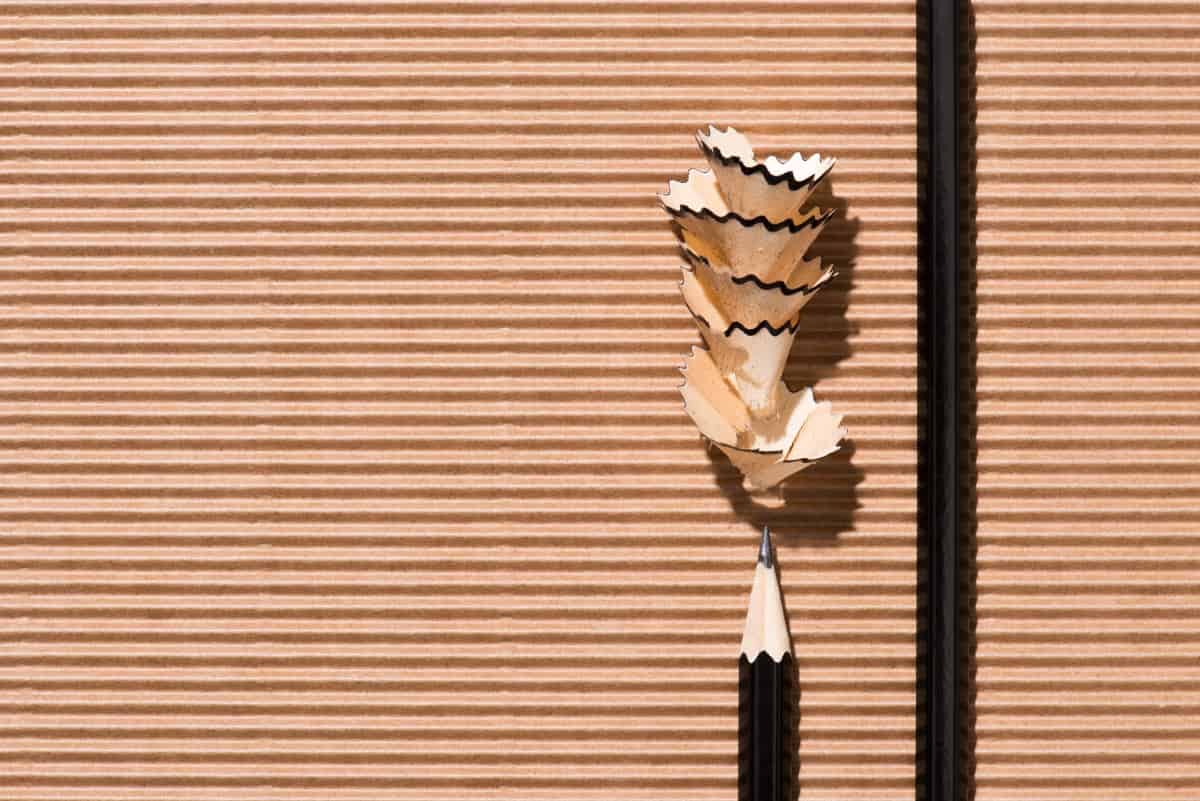 Being one of the oldest writing instruments, pencils have a complex manufacturing process. The main materials include a mixture of clay and graphite encased in wood.

What is a Pencil Made of? 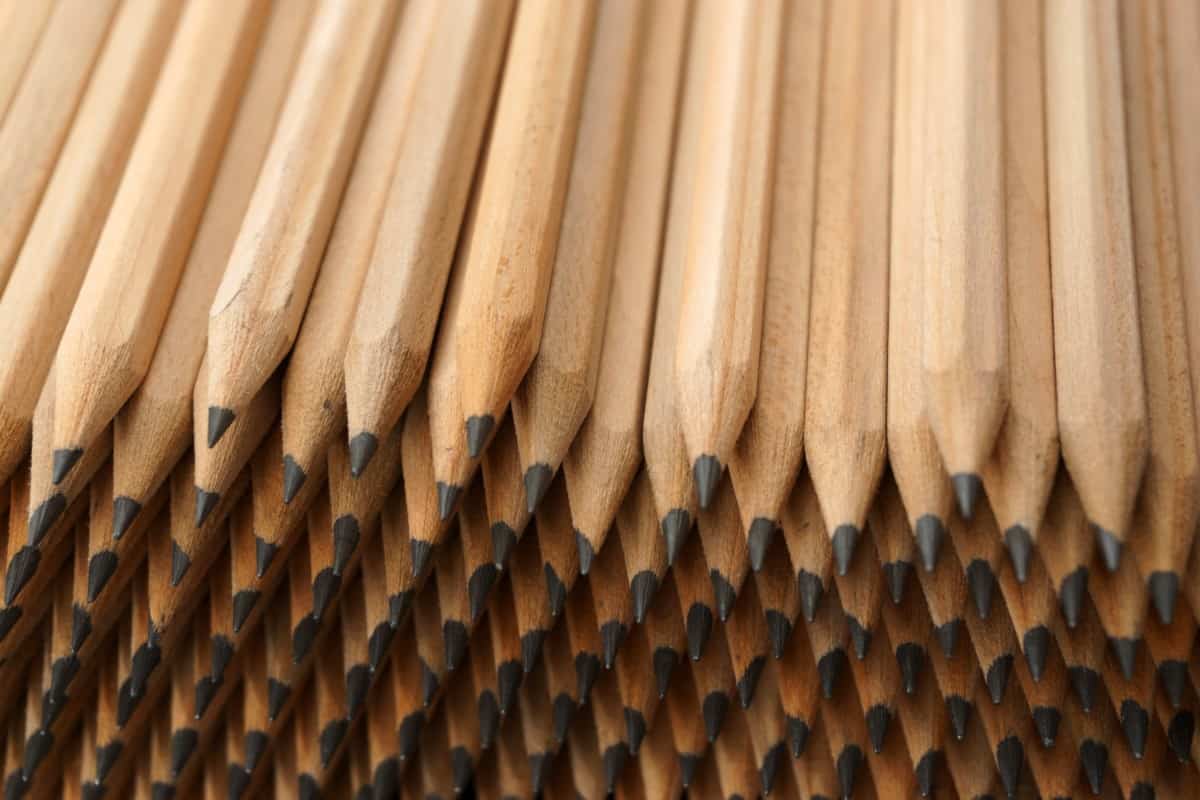 Although most people think that pencils are made using lead, the core of a pencil is made using graphite mixed with clay. It is a solid form of carbon, the sixth element in the periodic table. The more the graphite used, the softer and darker the writings become. The main reason the pencil core is not made using lead is its toxicity.

See also  How to Draw a Monkey in 12 Easy Steps

Earlier on, people used pencils as graphite blocks, but the advancement in contemporary forms of pencils made the graphite rod to be placed inside wood sleeves. The most common type of wood used in making the sleeves is cedar, where one tree can make up to 300,000 pencils. Wood casings make it easier to use a pencil, and the painting applied acts azs a protective and decorative coating.

However, the high demand for cedar made it scarce and resulted in people looking for other wood options. Some of these options include Abachi wood, Ayous wood, Basswood, Beechwood, California Incense Cedarwood, and Caribbean Pinewood, to name a few.

Marking materials is the most common technique used to differentiate the different types of pencils. These materials include: 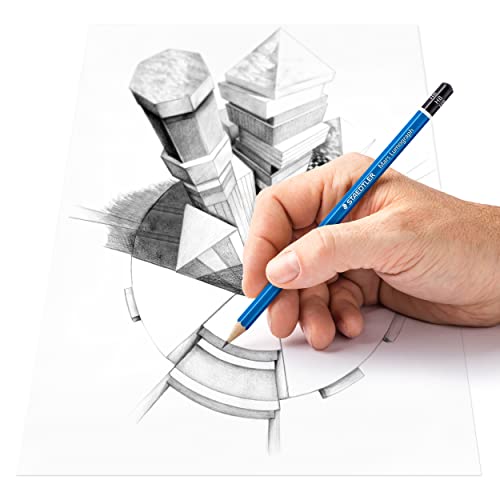 It is the most common type of marking material, made using a mixture of graphite and clay and confined in wood casings. These materials’ darkness varies from light grey to black. It is prominent for delivering the smoothest jots. 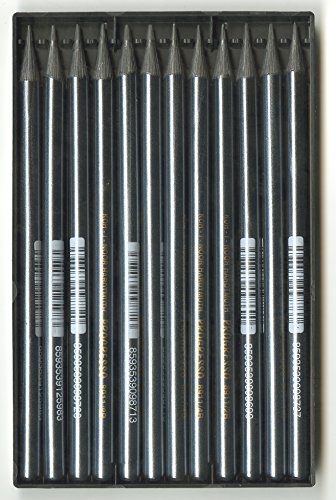 The difference between this type and the one discussed above is that these are woodless pencils. They are made using graphite and clay composite, but they have no casing. This type has the width of a common pencil and is mostly used in art, writings that require larger spaces and creating different effects. Their darkness also ranges from light grey to black.

This type mimics pens as they have liquid graphite. It allows one to write the usual graphite pencil effects using its liquid form. 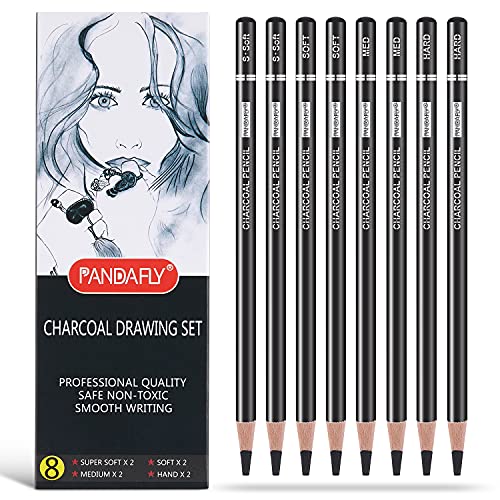 The material used in this type is charcoal, and it is good for writing fuller blacks. However, charcoal pencils are more abrasive compared to graphite ones. 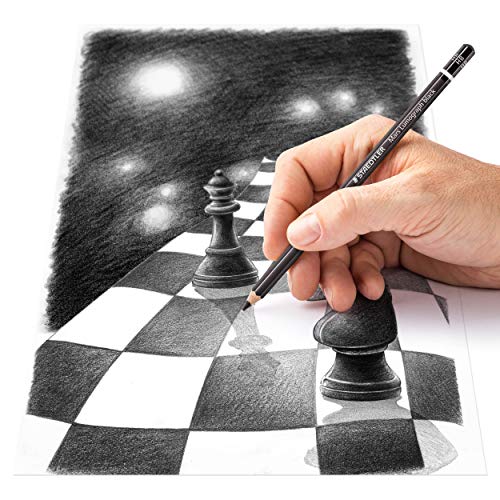 Lampblack and clay mixture are the primary materials used in manufacturing carbon pencils. Some manufacturers blend these materials with charcoal or graphite to suit a wide array of darkness. Carbon pencils are prominent for having minimal dust and providing a fuller black than graphite. In addition, they are smoother than charcoal. 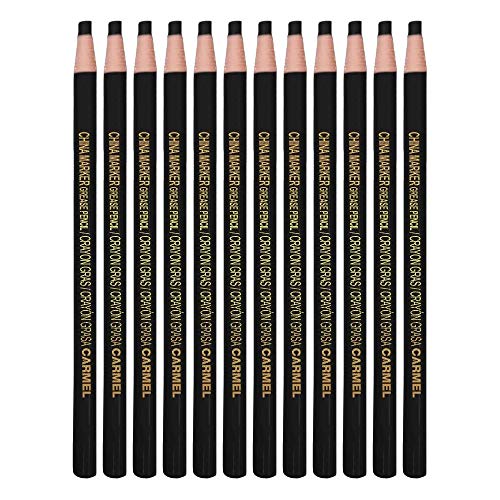 Grease pencils have various options of casings such as paper and wood. The best thing about grease pencils is that they can be used on numerous surfaces, such as plastic, metal, glass, and photographs.

Other techniques used to differentiate the types of pencils include the use, shape, size, manufacture, and casing materials.

The Process of Making a Pencil 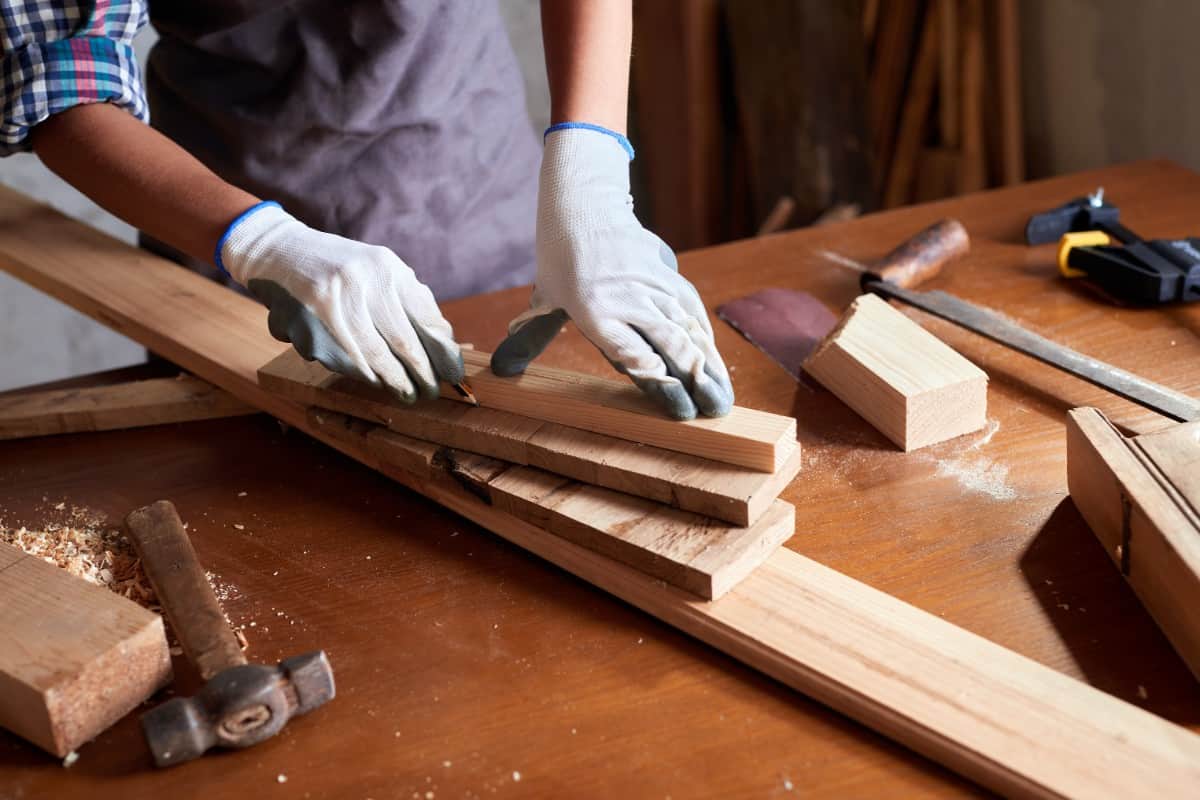 Pencil manufacturing is executed in factories that can process large quality of wood, graphite, and clay. Numerous types of machinery and equipment are used, such as giant kilns, mechanical saws, and lacquer sprayers, among others. Below are the steps used in making pencils:

The wood used in making pencils should be soft to allow sharpening and a bit rigid to avoid bending. The wood is pre-cut at sawmills to form pencil squares that have a uniform size. The slates are then placed in a dry kiln to ensure that they meet the recommendations for making the pencils. This is because they must attain the required size and moisture content before being shipped to the factory.

See also  How to Draw Violets in 11 Easy Steps

2. Create Grooves in the Wood

After the wood stock gets to the factory, they are placed on an assembly line for production. First, the squares are treated with wax and stain and then passed under a cutting wheel to create grooves along the edges. Grooves are made as they hold the graphite in position.

The grooves are filled with glue which provides cushioning to the graphite. If the pencils are not filled with this glue, they are prone to breakage even before the pencil making process is complete.

Mix the graphite with clay and bake in an oven at approximately 1500 degrees Fahrenheit. This is vital as it ensures that the graphite is hard and smooth and ideal for good writing.

5. Sandwich the Graphite in the Wood Slate

This step requires an automated arm to fix the graphite in the wood slat using glue. Then flip the wood slats and stack them on the top with another piece of wood. The sandwiches are then held tightly until the glue dries. A pressure of about 2,000 pounds ensures the slats are tightly held together and the glue has dried completely.

6. Cut the Sandwich into Pieces

The average time that the glue takes to dry is approximately one hour. Then the sandwiches can be chopped into standard pencil sizes. The pencils are shaped using a fast-spinning cutter to achieve a hexagonal design. Other pencil shape designs include round triangular, among others. Pencils that have any defects, such as uncentered leads or chipped wood, are disposed of.

The pencils are passed through a lacquer shower, where each pencil receives about 4 to 10 lacquer coats. The number of coats depends on the pencil quality, color depth, and finish. Decorative foils and films can also be used to boost decorativeness.

Although not all pencil manufacturers adhere to this step, this makes the writing more enjoyable. A metal ferrule and rubber eraser are added on the top.

This is the final step where the pencils are ready for usage. The pencils are packaged for shipping and can be used at home, school, or work.

Pencils are some of the most prominent writing tools that have been around since prehistoric times. Graphite is the most common material used to make pencil cores, although there are other materials such as carbon, liquid graphite, charcoal, and grease. The casings are mostly made using Cedarwood, but the demand has resulted in venturing into other wood types.

The process of making pencils is quite complex as it involves mixing clay with graphite, baking the mixture, and creating pencil squares, among other steps, as discussed in the above article.