Sorry! is a classic board game where four players race a set of pawns around a track. Each turn, the player draws a card and moves the number of spaces or otherwise follows the instructions on it. If a pawn lands on another pawn, it sends the squashed piece back to the starting location.

The Sorry! cards that share the game’s name will let players bump a pawn back to start and put one of their own unmoved pawns in its place.

Competitive gameplay with a light set of rules that are easy to pick up across a wide range of ages made it a mainstay on game shelves. While the game that inspired it is far older, Sorry! has been available in stores for nearly a century now. In 2013, the core game received an update with the addition of Fire and Ice cards that can speed or freeze pawns, reducing the pawn count, and other small tweaks.

Great games that are similar to Sorry!

Killing time with a game of Sorry! can be fun, but it can quickly wear out its appeal. These other games have elements that are reminiscent of Sorry!, so give them a try if the basic game isn’t sparking excitement anymore.

See also  What Card Games Can You Play With Two People?

Board games and card games are technically separate, but card games that have similar attributes to Sorry! and don’t use the standard deck have been included.

Parcheesi is the Americanized version of Pachisi, the Indian game with ancient origins that inspired Sorry!. The rules are similar, but Parcheesi uses a pair of dice instead of cards. There’s also no option for moving backwards in Parcheesi, an occasional strategy in its successor. Instead, a player can temporarily form a blockade by landing two of their pieces on the same space, preventing any other pawn from moving forward.

Otherwise, both feature a journey around a board with the possibility of bumping another player’s pieces back to start. 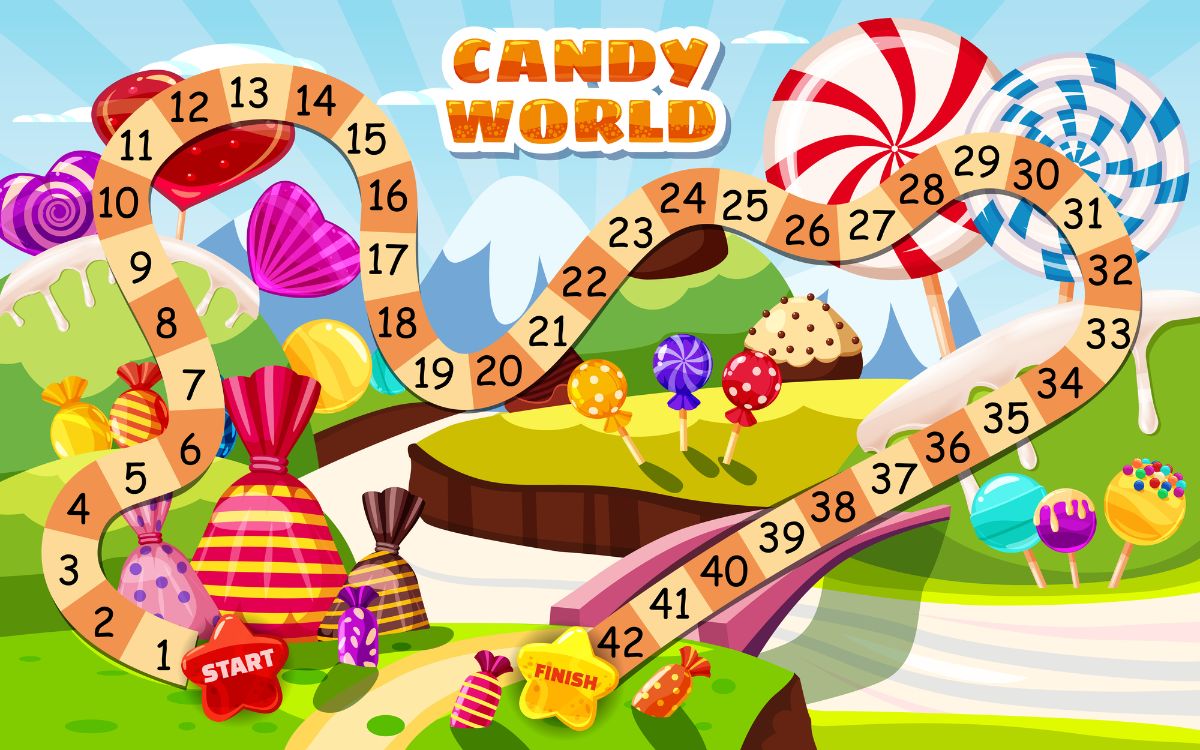 The simplicity and lack of antagonism make Candyland a far better introduction to gaming than Sorry! for very young children. Unlike Sorry!, the competitive element is only to reach the end of the Candyland track before the other players. Players move by drawing cards and advancing to the color or picture shown on the face.

No reading or math required, although some cards have multiple colors that allow a player to skip their character ahead.

While it’s now been around long enough to be a standard on game shelves, Trouble is the newest classic to feature similar gameplay to Pachisi. The rules are condensed even further to just one die that sits in a bubble that players “pop”. Players can move pawns from the starting zone and get a bonus turn on a roll of 6. The board is also much shorter than the Parcheesi board, causing the overall game length to be lower than Parcheesi or Sorry!.

Because it’s fast to learn, setup, play, and clean the game, it’s a great option to leave out as an option for younger children. 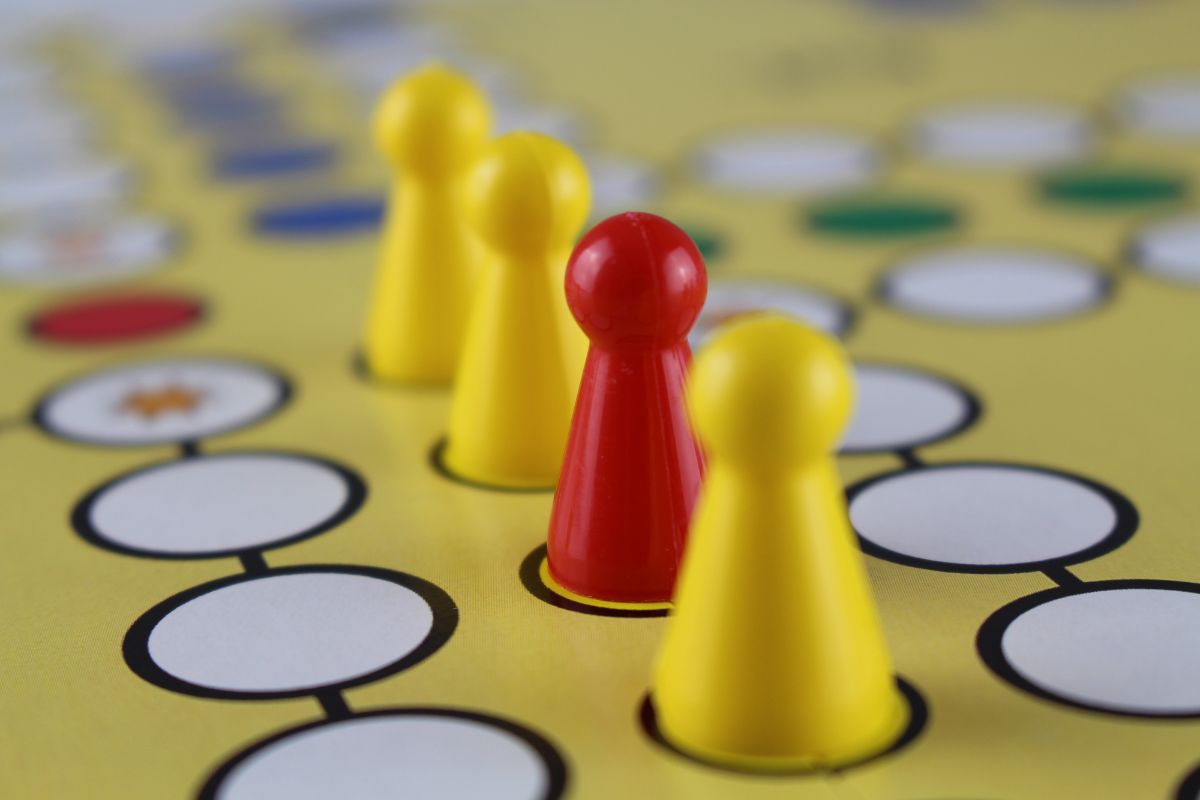 Gameplay for Aggravation is like Trouble, except two more players can join in the game and a shortcut with special rules lets players skip through the middle of the board if they’re lucky enough to land on it exactly. A single die determines how many spaces a pawn can move, but there’s no bubble to pop.

Unless your gaming table frequently has more than four kids and they all love Sorry!, it’s not an essential addition to a gaming shelf. If you don’t have a copy of Sorry!, Aggravation is a suitable replacement for its intended spot.

Formula D is a roaring race around a winding track. Aside from a race track theme that is more entertaining than the generic Sorry!, Formula D features unique dice that represent the gears of the car. The lowest gear only moves 1 to 2 spaces, but the 7th gear can speed along at 30.

Go too fast, and you risk overshooting corners or having to suddenly brake, destroying your brakes and tires and taking your car out of the race. Trying to land directly on another player will hurt your own car, but positioning yourself in front of them can force them off the track and to the sidelines.

If not for a more advanced rule set and special pieces that make it easier to play, this would be a good game for small kids that love racing. It might be a good way to draw in older racing fans to the game table. The rules aren’t too complicated for older kids and adults, so it makes a great bridge from classic to modern board gaming. 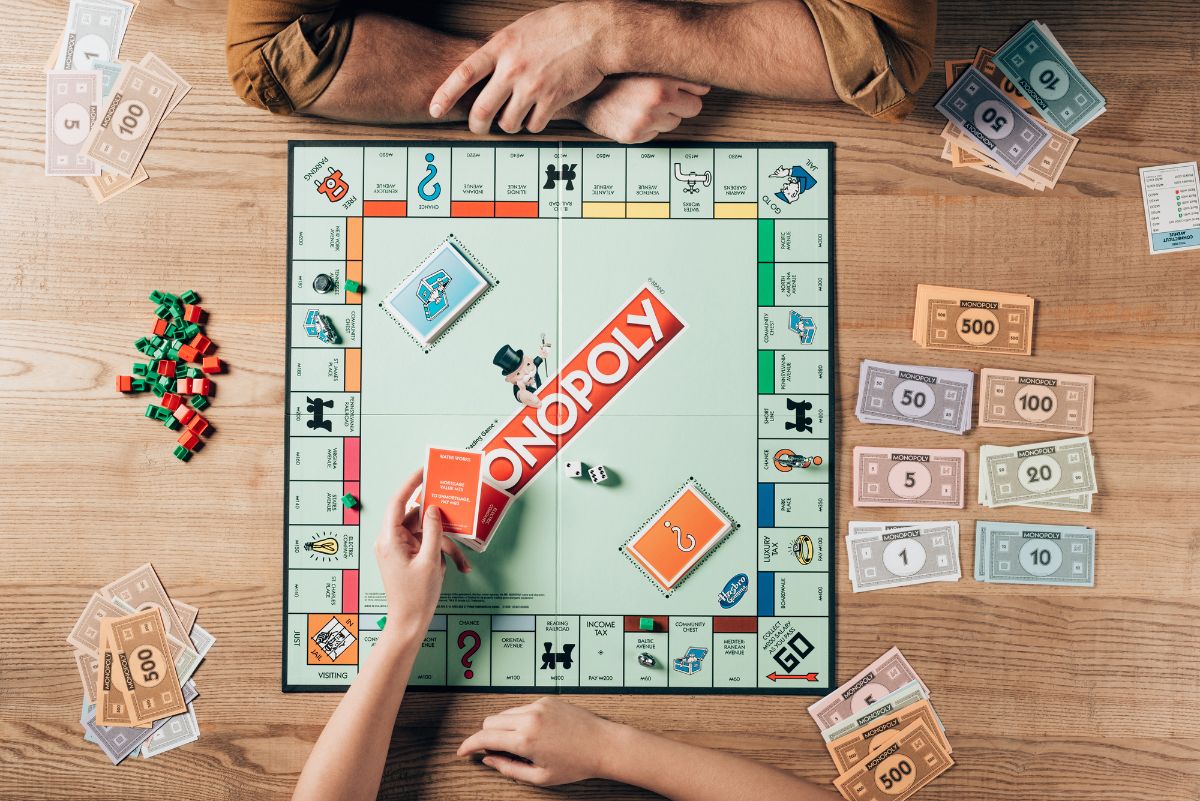 Monopoly is classic and competitive, but it’s more complex and antagonistic than a game of Sorry!. Players move around a board, purchase properties, and try to bankrupt the other players by charging rent and fees. While sometimes embellished for comedic value, many of us have stories of family and friend game nights being ruined by a competitive game of Monopoly.

Like Sorry!, it’s an older game that has spawned plenty of variations with themed components, such as the Fallout Monopoly sitting on my game shelf. The versions that come with “credit cards” instead of physical cash are fantastic for speeding up play and avoiding accusations of cheating by the bank.

Since there is more nuance to the competition and games can take much longer, it’s not the best option for very small kids, anyone with a short attention span, or sore losers. 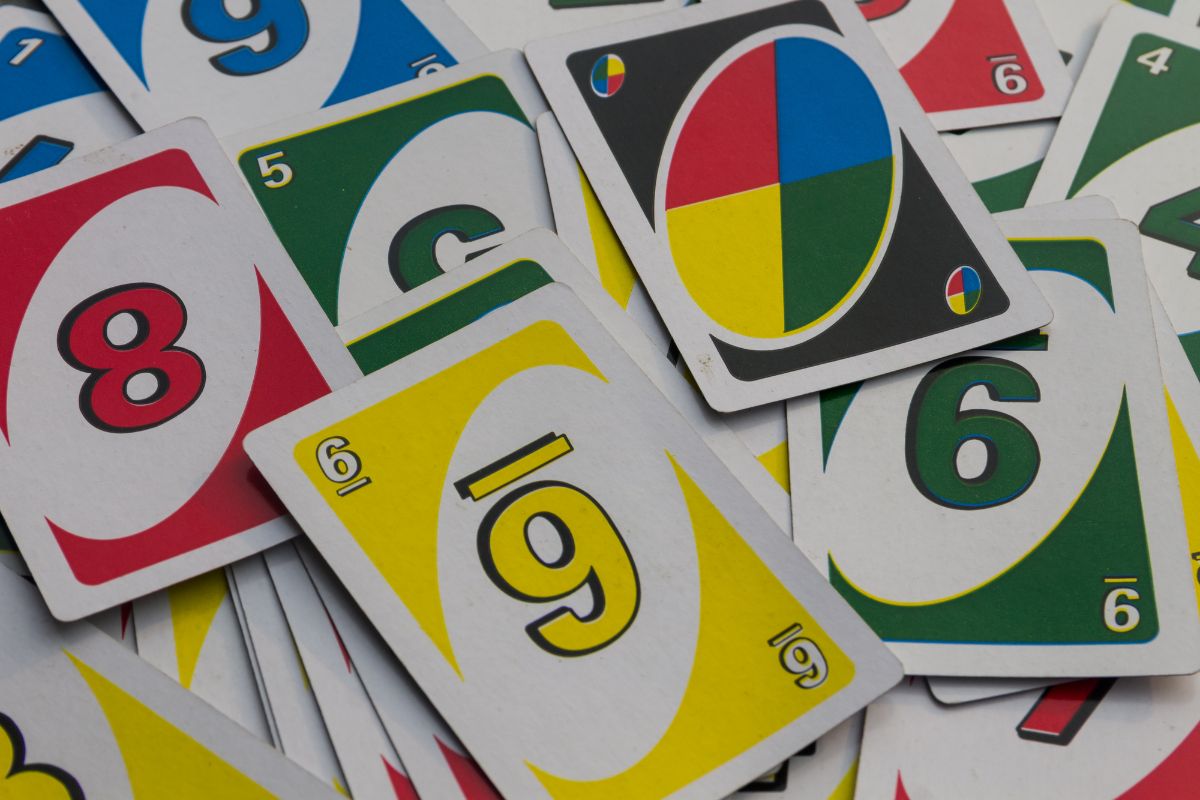 While a card game, Uno usually sits next to the other classics on the game shelf. Players take turns laying down cards that match the latest face-up card, drawing a card if they can’t. The first person to discard all their cards is the winner. A player discarding down to one card has to say “Uno”, or they have to draw cards if another player says it first.

On the box, Uno is recommended for ages 7 and up, but younger kids could likely pick it up. There’s some extremely light reading and math, but remembering what Draw Two and Draw Four mean can be done with minimal language processing. It also has a huge number of potential players with a recommendation of two to ten.

See also  What Board Games Can You Play With Two People? 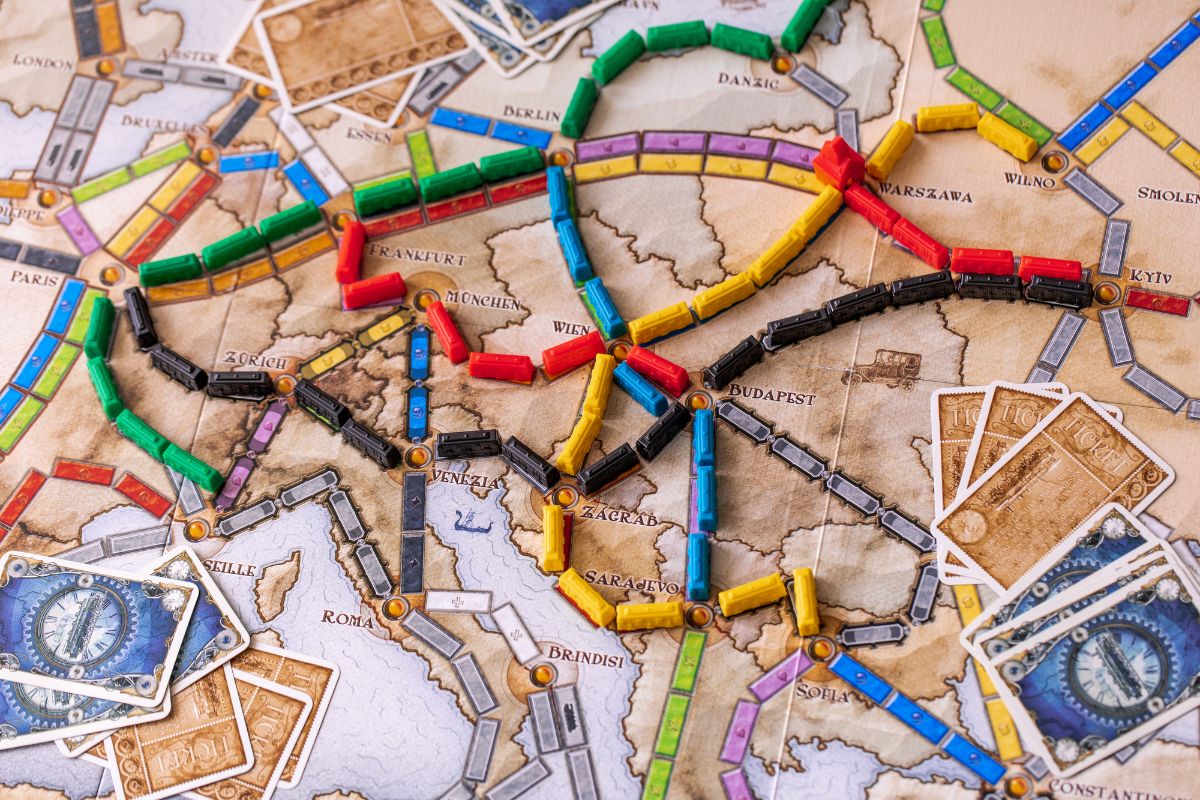 Like Sorry!, Ticket to Ride is a competitive game that uses cards instead of dice rolls. Five players play as friends competing on a cross-country trek by train. Almost all of the train routes can only be used by a single player every game. You can’t send another player back to start, but you can frustrate them by snagging a route that they were planning to take.

There’s no reading involved, but there is some basic math and color matching. The rules are short and fairly simple, except for the scoring system at the end. It’s billed for ages 8 and up, but kids slightly younger than that would likely be able to play it with help, if they show interest.

Galaxy Truckers features two races in each round. The first is a race to gather up a heap of spaceship component tiles to construct a ship that can haul goods and passengers across the void. Not all of the pieces will line up well, and it’s possible for entire sections of a spaceship to break off from the body.

The second is jockeying for position with other trucks on the delivery route, though it isn’t always a good thing to be first when hazards are lying in wait. How the ship was constructed in the first part may decide whether a hazard is harmlessly bypassed or starts ripping the ship apart.

As a modern game, there are a horde of unique pieces and cards that are required for play. Galaxy Truckers is not as expensive as some others, despite the extra pieces. The rules have a few more moving parts than most classics, especially with the supplemental materials that let you change missions and include new options.

10. Kittens in a Blender

Kittens in a Blender is as cute as it is morbid. Players compete to save their own precious felines while aiming the other players’ towards the blender. It’s fairly fast-paced, takes minimal set up, and it doesn’t actually show any gruesome bits. All of the kitten evisceration is suggested and off-screen, though that doesn’t stop the emotional tugs on the heart strings when a wide-eyed friend ends in a blend.

Munchkin plays like a role-playing game using cards for various abilities and equipment. Reading is a definite must, but the basic rules are simple. After learning those, you follow the rules on the cards. It’s a card game with a low spread, so it takes up less space on a game shelf and shouldn’t overcrowd a table during gameplay.

It’s definitely a modern game, but it’s been around long enough to have dozens of variations. Any board game store in your area will likely have multiple versions available for sale near the checkout. 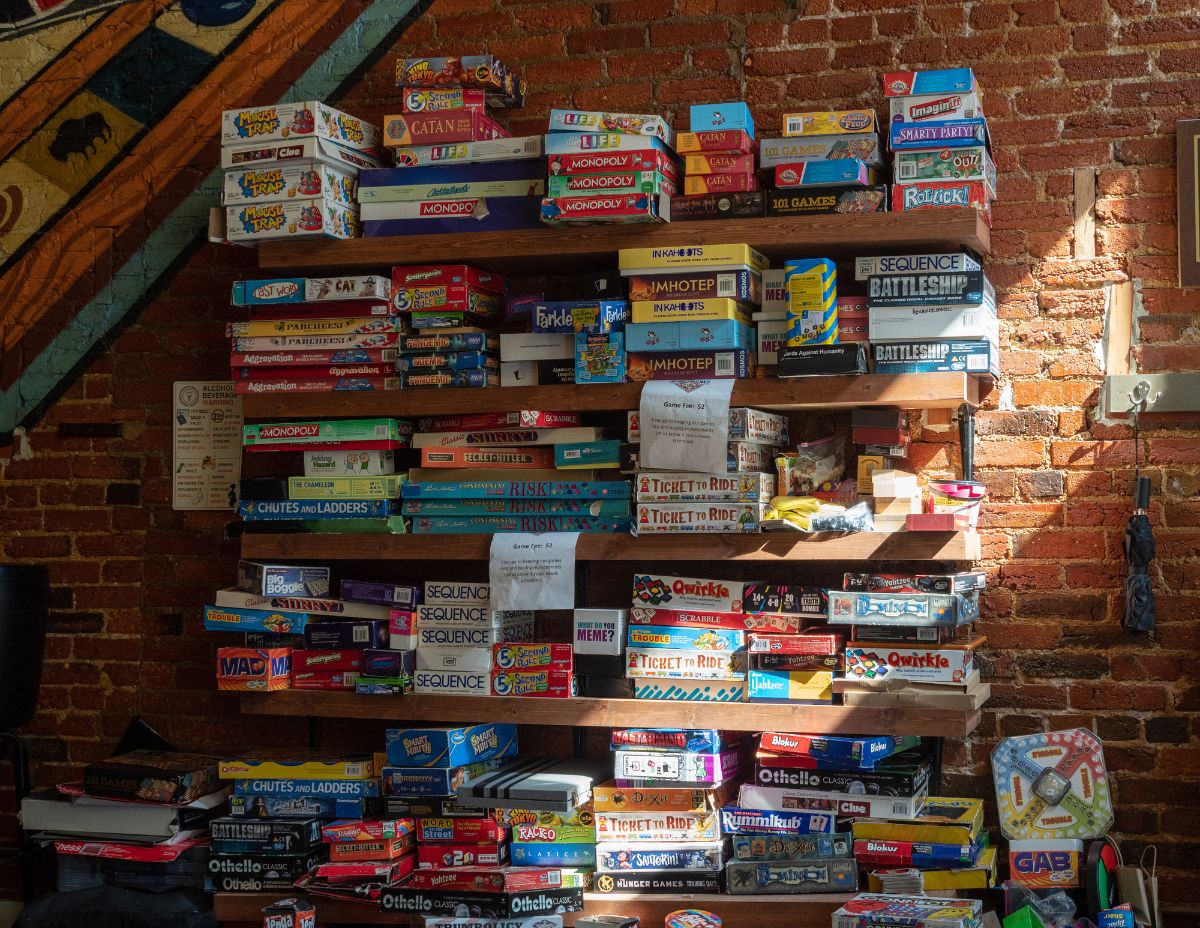 The vast majority of alternate versions of Sorry! have the same rules with a different theme and a few extra cards tossed into the deck. Many of these had limited runs, but enough copies are floating around that they aren’t overpriced.

It’s a battle of the Disneyverse in this version of Sorry! Each player color is split into a different category of Disney character. Red plays the villains, like Captain Hook, Princesses such as Snow White glide around the board under yellow’s control. Heroes like Buzz Lightyear surge to save the day for blue. Green plays animal characters that include Winnie the Pooh and Dumbo. Some cards in the deck only work for specific players, but the rules are otherwise unchanged.

This time, only the Disney villains are competing.  Each color is associated with a villain, and the pawns of each color have a unique shape matching that villain. The spell cards in the deck give each villain additional nasty surprises for their rivals.

The only catching in the Pokemon version of Sorry! is catching up with opponents. Each color represents a type of Pokemon, like the electric yellow. Some of the cards represent Pokemon moves that only work for specific types. It’s not too far off from the basic Sorry!, but it’s a good gift for a Pokemon fan.

Movable walls and a “crane” made from building bricks make this version of Sorry! cute with much better replay value than the basic Sorry!. The movable blocks add extra bits that can be lost or present choking hazards to very small children, but the basic 1×4 bricks are pretty easy to replace.

The board and rules in Sorry! Rivals are condensed for two players. Paying the same for less seems odd, and there are travel-sized versions of Sorry! that are better suited for playing in the backseat during roadtrips. A game of Sorry! isn’t especially long in most cases anyway, so shrinking it down further doesn’t seem necessary. You could also just make up your own rule additions for the basic game to speed it up instead of purchasing another copy. 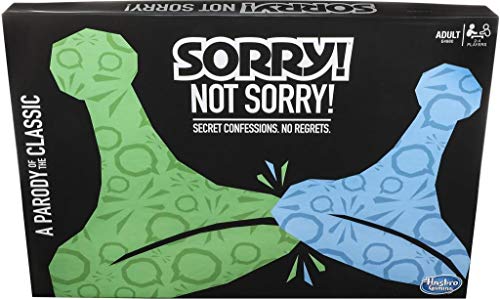 Before you purchase Sorry! Not Sorry!, be warned that it is a parody of the original Sorry! meant for adults. Some of the cards have players answer personal questions if they want to move their pawns the maximum amount. Aside from the potentially personal nature of those cards, the game has a few updates to movement options that do update the game from the original in a more substantial way.

If you pull the ‘Not Sorry!’ cards or replace them, it’d be fine to leave this version out on a family game shelf. As an actual adult party game, it’s not incredibly fun, but the simple rules do make it easy to play while inebriated.