There are many different ways to get from one place to another. Although the motorized car and the bicycle are the most ubiquitous vehicles on the streets of most cities, they are not the only ones. The tricycle is also a commonly used means of transport. In some parts of the world, it is as popular as bicycles and motor vehicles.

When most people think of a tricycle, they think of the little recreational vehicle for children. This is only one type of tricycle, and it is not even the most common. In this article, we will explore different types of tricycles and interesting facts related to them.

Contents show
What is a Tricycle?
Types of Tricycles
1. Recumbent Trikes
2. Upright Trikes
3. Rickshaw Trikes
4. Freight Trikes
5. Drift Trikes
6. Hand and Foot Trikes
A Brief History of Tricycles
Tricycle vs. Bicycle
1. Stability
2. Comfort
3. Manoeuvrability
4. Climbing ability
5. Safety
Frequently Asked Questions (FAQs)
Who should use a trike?
Who shouldn’t use a trike?
Are there trike competitions?

What is a Tricycle? 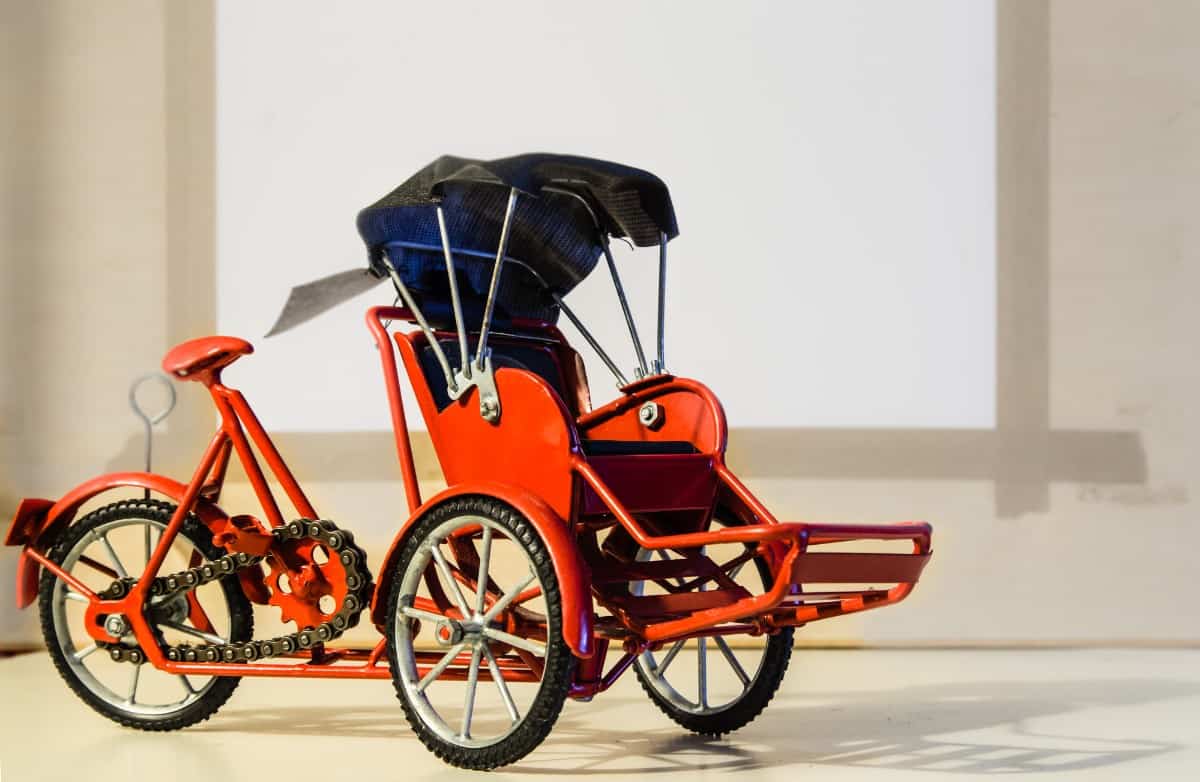 A tricycle has the shape and many of the features of a bicycle. But instead of having two wheels, it has three. Tricycles are often referred to as trikes. They sit their riders lower to the ground than most bicycles, which makes for a more comfortable riding position.

Trikes are used as a first bike for children because they have a stable wheelbase and are easier and safer for young ones to steer. Adult tricycles are used for recreational cycling, commuting, and other forms of personal transportation. Trikes are also used for public transport and to carry goods. There are manual trikes that must be peddled by the rider, and there are also electric trikes, which are powered by a battery.

See also  32 Toys for Kids Who Like to Spin Things

This article will deal mostly with adult trikes, as they are the most varied in type and form. Trikes are the best choice for people who have balance issues. If you never learned to ride a bike because you could not quite learn how to balance yourself on one, a tricycle may be perfect for you. They are both stable and sturdy, and are as easily ridden by men and women. The key component of a tricycle is the third wheel: it adds stability and control.

Here are the types of trikes available on the market: 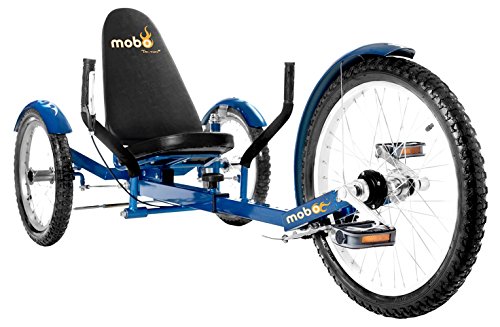 These trikes give complete back support for a rider. It allows you to sit in a laid back position with legs in the front position. This position will give support to your neck, shoulder, back, and buttocks. 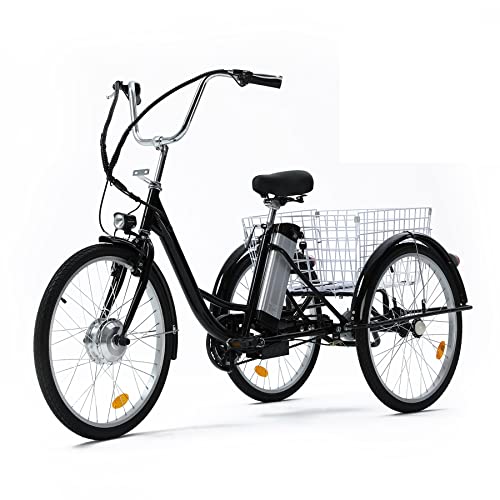 These tricycles allow you to sit in a straight position—akin to the way that you sit on a bike. They have saddle-style seats that give the rider excellent visibility. However, you must be careful when taking corners as the center of gravity is less. One of the main advantages of these trikes is that the pedals are down and so it is easier to move the vehicle with your weight. 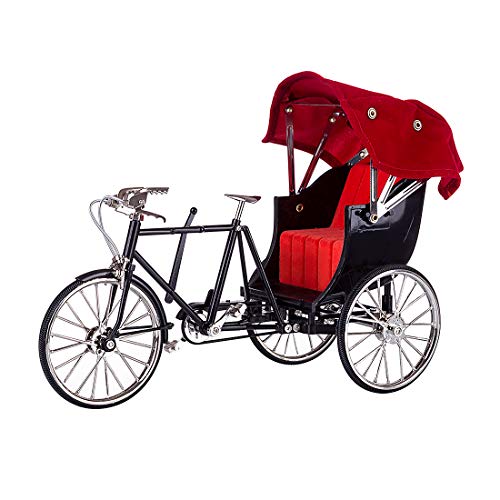 If you have ever travelled to Asia, then you have probably seen these types of trikes everywhere. They are used as a means of local public transport. They usually have space for two or more persons. Though most rickshaws are foot-powered, a growing number of them are driven by engines.

The prevalence of rickshaws was once seen as a sign of a city’s underdevelopment. They are now hailed as one of the best forms of public transportation in highly congested areas, as they contribute substantially to green solutions. 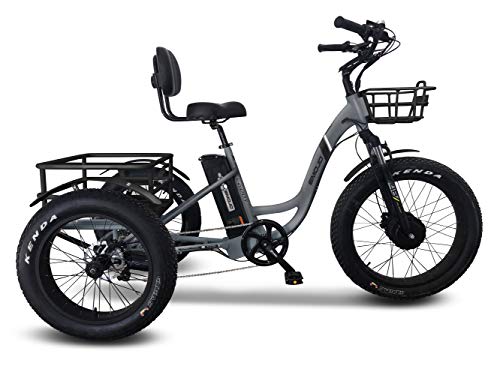 These are also known as cargo tricycles. They are designed to carry bulk or cargo loads from one place to another. Freight trikes have an open or closed box carrier in which things can be transported. They also have a limited load capacity and a very limited operating speed. 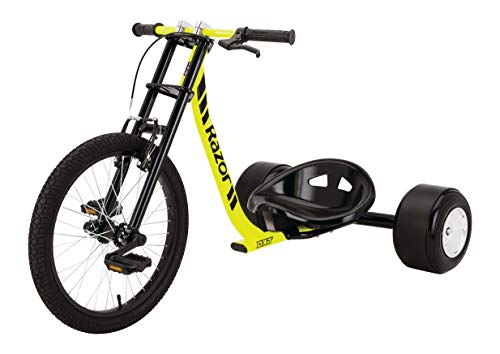 These trikes have low traction rear wheels. They are designed to drift. They lose traction to the rear wheel and counter-steer to deal with corners. These types of trikes tend to be ridden on plain roads with a steep downhill grade and corners.

This is a rather innovative type of track. It was designed for people without a great deal of strength in their legs and thus are unable to use a conventional tricycle. This trike has a hand pedal system. Seating options and accessories come with the tricycle. These are designed to meet individual requirements for postural support and the kind of assistance that will allow the rider to pedal effectively with their hands.

A Brief History of Tricycles 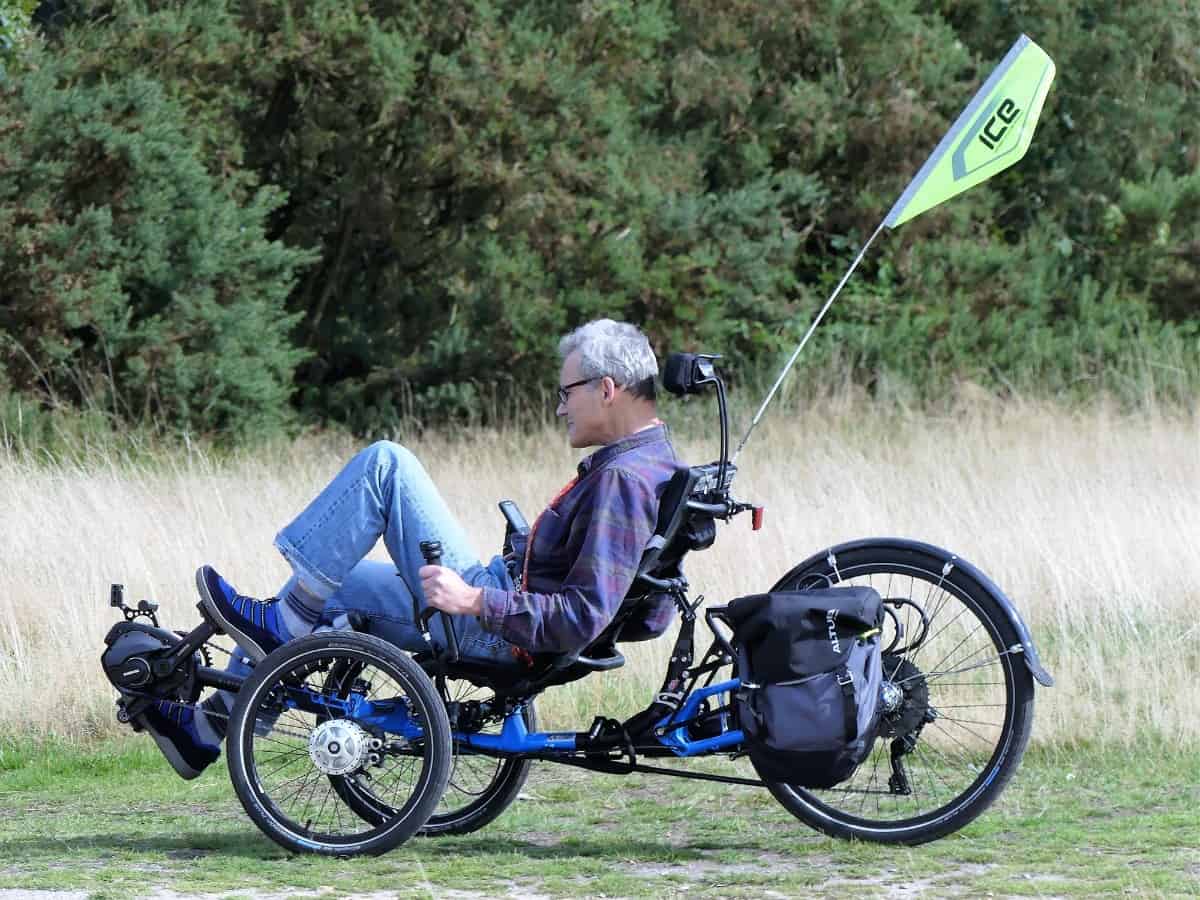 The first record of a tricycle is in the late 17th century. This makes the vehicle even older its more popular two-wheeled cousin, which does not appear until later. The first prototype trike as made by the German watchmaker Stephan Farffler.

He was an aged man, who appears to have been disabled. He created a small carriage with three wheels that could hold one person. This early tricycle also had a simple mechanism around the front wheel that enabled the rider to rotate the crank and transfer its power to the wheel.

This first tricycle was a mere private innovation that went nowhere. In 1797, two French inventors, completely unaware of Farfller’s contraption, created a three-wheeled device that could be powered by pedals. They gave it the name tricycle, a tag that stuck to it from that time to the present.

The tricycle was still rarely seen on the streets of Europe and America in the early 1800s. It was not until the latter part of the century that the popularity and production of the tricycle took a great leap forward. Manufacturers started producing the vehicle in volume.

The biggest expansion in the production of the tricycle occurred in England. It was led by the industrialist entrepreneur James Starley who developed several models of the vehicle. By 1884 over 120 different models were produced by 20 English manufacturers. These were spurred by an enormous uptick in demand.

People wanted tricycles mostly for personal use. Trikes proved especially popular with women. The latter wore long dresses, and the design of the tricycle made it easier for them to get around on.

These tricycles for personal use came in several forms, most commonly with sitting and upright seats. Indeed, the tricycle became so popular in the United Kingdom that it was the first country to form a Tricycle Association.

Tricycles continued to evolve during the 20th century and became more and more popular. The designs have become more streamlined so that the wheels became more similar in size and the drivetrains much more sophisticated.

E-trikes have become very popular. These tricycles are powered by an electric motor and help riders when they need to drive up hills or haul heavy items. 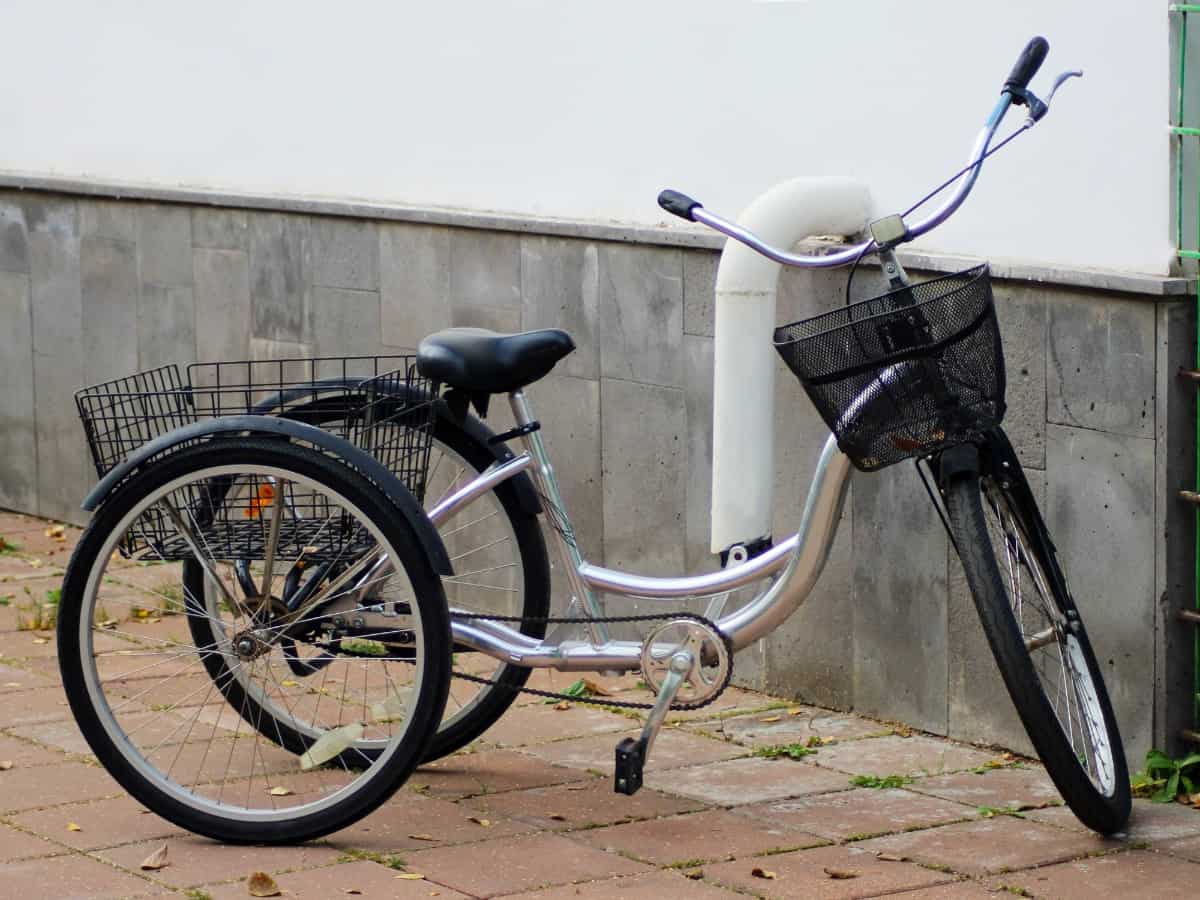 Comparing these types of vehicles is quite natural. If you currently ride a bike and are curious about how that experience may differ from using a tricycle, then the following information may be useful to you. This comparison is also important to people who never learned to ride a bike and have no interest in doing so.

They should know that a tricycle is an entirely different type of vehicle. Their aversion to bicycles need not extend to tricycles.

Here are the most essential factors to compare:

The three wheels on a trike make it much less prone to falling over than a bicycle. Taking corners on a bicycle at high speed can be hazardous. This is simply not the case with a tricycle.

Bicycles are not the best promoters of good posture. If you ride a bike, you must always do so in an upright position, which can put tremendous strain on the upper body. Most trikes have no saddle. Recumbent trikes in particular use a seat that spreads pressure over your buttocks and back, which provides increased comfort.

A trike is easy to move, control, and steer. Because they are more stable, you are less likely to fall off even when you change direction abruptly.

If you live in a hilly area or must travel through one every day, you may find a trike much more to your liking. With a tricycle, you can travel uphill slowly without needing to stop or dismount. If at any point you need a breather, you can put the brakes on and rest.

With a bike, you must stop and dismount to catch your breath. The bottom line here is that a trike is a better option if you are not as fit as you should be.

Tricycles ride much lower to the ground than bikes. This can be a safety issue if you regularly ride on the road in heavily congested areas. It may be harder for drivers of motor vehicles to see you.

However, this is easily overcome by wearing the right safety gear and equipping your trike with the same.

Who should use a trike?

Anyone who does not feel comfortable riding a bicycle or is unable to do so. As mentioned before, if you have a problem with balance and you don’t want to risk injury on a bike, then you should opt for a tricycle.

Trikes are also a great option for small children and elderly people, both of whom may be at a higher risk of falling. You should also consider a trike if you have to haul around heavy goods from place to place. Many people who care for elderly and disabled family members find that it is easier to collect and take them what they need every day.

Who shouldn’t use a trike?

If you want agility and speed, then the trike is not for you. For many people, the appeal of a bicycle is that it gives them a bit of a workout every day. The trike was not designed for this purpose.

It was designed to supply people with a comfortable and practical means of transport.

Are there trike competitions?

As a matter of fact, there are! The most exciting competitions consist of trike drifting events, which take place on steep hills. The point of the competition is for riders to demonstrate their skill in navigating the many twists and turns on the road.