Did you know guitars are one of the oldest musical instruments dating back as far as 3100 BCE? Since the initial crafting of the guitar, the ubiquitous instruments have evolved to integrate new innovations and changes. Probably you have encountered a set of guitars, and you are in a dilemma about which to play or purchase them. Get to learn more about guitars by scrolling within this guide.

The modern guitar shape was innovated by Spanish guitar maker Antonio Torres Jurado back in the 1850s. For musical enthusiasts, the guitar can be featured in almost every genre of music. Understanding the type of guitar is imperative in ensuring easy learning of how to play the instrument.

How many strings does a standard guitar have? Well, keep reading to comprehend much more about the compartments of a guitar. Each type of guitar sounds different; thus, the type of music you want to play should incorporate the correct type of guitar.

Guitars are descendants of the Lute with the curved shape familiar today, originating from historical romantic guitar instruments. Without further explanation, let’s get to the most sought-after type of guitar.

The electric guitar was invented between the 1930s and 1940s. They feature diverse models and shapes as musical companies continue to advance in development. Electric guitars encompass a solid body with six strings on the neck. The most recognized electric guitar models include the Fender Telecaster, Gibson Les Paul, and Fender Stratocaster.

Electric guitars aren’t hollow; thus, they can’t resonate and project sound. They are crafted with magnetic pickups underneath strings to aid in sound projection. The magnetic pickups are vital in converting string vibrations into an electrical signal and then transferred to an amplifier.

Musical enthusiasts can use electric guitars in music genres such as blues, jazz, rock and roll, pop music, punk, and metal. The mode of playing the electric guitar may include the use of fingers or a pick to pluck the steel strings. Electric guitars are suitable for beginners as they are available in varying sizes, even for children.

They are ideal for outdoor activities such as beach bonfires. Historically, the acoustic guitar trended in the 1920s as a rhythm instrument for orchestras and big bands. The instruments can be used in rock, bluegrass, and folk music styles. The acoustic guitar is the most preferred by singers and all other music instrumentalists.

Reason to buy an acoustic guitar

The guitars are also known as Spanish guitars. They are similar to acoustic guitars but are made of nylon strings instead of steel. Mainly, the classical guitars are used to play flamenco, jazz, classical, and bossa nova musical styles.

The classical guitars are built with spaced nylon strings, thus easing the finger plucking style. Nylon string materials produce a richer sound than steel strings. Due to their mellow tone, they are great for solo playing. Additionally, they can be amplified by the addition of a pickup.

Low string tension and wide fret-board allow you to pluck the string easily with your fingers to play a note. They are perfect and excellent for kids to learn. Guitarist Willie Nelson and actor Jerry Reed are some of the geniuses with superb skills at playing classical solo.

They are also known as Hollow-body electric guitars. They are thin and compact. The semi-acoustic guitars look more like electric guitars with f-holes on the front of the body. They have at least one pickup and a sound box less comprehensive than that of acoustic style. Examples of the semi-acoustic brand include Fender Telecaster Thinline and Gibson ES-335.

See also  14 Board Games for Teenagers

To answer our previous question about the number of strings a guitar has, a usual guitar incorporates six strings. Unlike typical guitars, 12-string guitars have twelve steel strings. The guitar is ideal for playing chords and rhythm sections.

12-string guitars were trendy in the 60s and 70s. They produce a very distinctive sound.

The 12-string guitar sets a course by doubling the usual six strings to produce a more luscious, big, perfect, and resonant sound. The doubled strings make t challenging to play solo or fast single notes. They are often used in pop, rock, and folk music.

This type of guitar is built with much larger strings. Most of them integrate four strings, producing a big, thick, and lower octave sound. Bass guitars can be tuned and played by either the use of pluck or fingers. Some of the recognized bass guitars include Fender Precision, Rickenbacker 4001, and Hofner Violin.

Bass guitars are solid-bodied, electric, and have longer necks and scale length. Bands can use them on both lead instruments and rhythm sections. The guitar can be featured in a wide variety of musical styles.

They are also recognized as resophonic guitars. They are similar to acoustic guitars but crafted using metal cones on the front of the guitar instead of a wooden soundboard. The metal soundboard makes the instrument louder and more resonant.

Resonator guitars are played with steel to produce a specific tone. They are commonly used in bluegrass, blues, Hawaiian, and jazz music. An example of a resonator instrument is the Dobro.

The steel bar frets to determine which notes to play. The steel slides along the strings to move from one note to the next. Steel guitars produce a unique and silky-smooth sliding tone between notes.

Guitar makers may sometimes go overboard to innovate and craft new designs for instrument enthusiasts. It’s likely you have encountered a weird type of instrument and wonder whether it falls under guitars. Some of these unusually designed guitars include:

See also  Fun Things To Do With Your Grandma

They are well-designed to encompass more than one neck. Most multi-necked guitars have two necks. The crafting integrates six strings in one neck and 12 strings in the other neck.

The double-necked guitar is one of the most versatile instruments. Guitarist Michael Angelo from the band Nitro is famous for playing both necks at once. 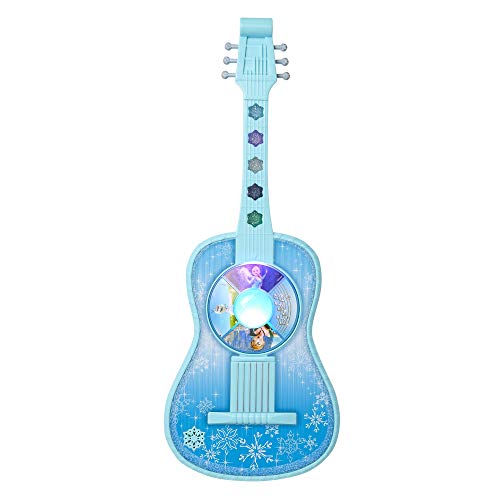 This type of guitar is played without any type of plucking. The player taps the strings on the fingerboard designed like that of piano keys. The strings are thicker and more spaced out to facilitate ease in tapping. 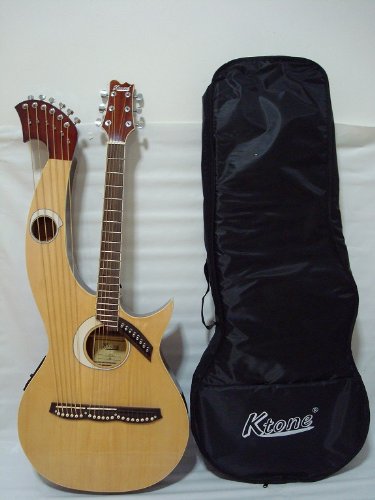 These types of guitars integrate a combination of a guitar and a harp. The harp guitar is designed to have strings extending past the lowest string on the guitar body. The low strings are mainly used to generate deep and resonant bass-filled sound harmony. Steel strings on the guitar neck are used to play regular chords and melodies. 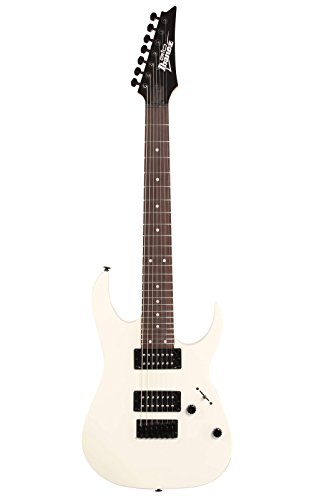 Metal guitarist Steve Vai pioneered this type of guitar. They encompass extra low strings tuned to a B. They are famous for an ultra-low heavy sound.

7-string guitars became popular in the 90s. Most of them are electronics brands. The guitarist can play any note, just like a note guitar note, with the ability to reach as low as a bass guitar. They are used mainly by guitarists who play technical styles and heavy styles of music.

They are big and heavy with fretboards like shelves. Moreso, they are not suitable for beginners as they are difficult to tune, but if you get used to them, you will never use any other guitar.

Guitars are unique instruments; thus, you can purchase one of these types of guitars to surprise your loved one or as a gift to your kids!

Cousins of the Guitar

They are fretted string instruments related to the guitar. They include:

They are fretted, stringed instruments with some models crafted with double nylon or gut strings. They are crafted with rounder and shorter shapes than guitars. Lute instruments are plucked with fingers.

They are small instruments with four sets of strings played with a pick. Initially, they originated from Italy. The gaps between frets are smaller than those of a typical guitar.

Mandolin is almost similar to strummed violins. They produce a trebly but very bright sound. The instruments can be used extensively in country music, bluegrass, and folk musical settings.

It is a common American instrument mostly used in country music and folk music. The well-known instrument is crafted with a plastic membrane stretched over a frame. Banjos produce a twangy sound when plucked with a finger or a pick.

Banjos encompass five strings, with the highest string going halfway down the neck. The strings are usually tuned to open the G chord. They can be used in folk and bluegrass styles of music.

They are small Hawaiian instruments with four main nylon strings. Uke looks a lot like miniature guitars. The Ukulele differs in size with four main variances, including baritone, tenor, concert, and soprano.

The Ukulele produces delicate, twinky, and very trebly sounds. They are ideal for singer-songwriters who want to accompany their singing. Additionally, children can learn the instrument at ease.

Historical guitars may be hard to find nowadays. Historical models like the Lute were manufactured similarly to nylon-string guitars. Examples of historical guitar models include:

These types of guitar were popularly used during the 18th and 19th centuries. They encompass six strings. In terms of their size, they are smaller than modern guitars but larger than baroque guitars. It has a curved shape.

They were popular in the 16th century. The instruments were used to play chords. The renaissance guitar is a very small guitar featuring four string courses. The body of the guitar is straight.

They were slightly larger than Renaissance guitars popularly used in the 17th century. The guitar has five-string courses made out of the animal’s gut. Baroque guitars’ frets were movable with straight body shapes.

That wraps up our comprehensive guide to common types of guitars. Having gone through the various types of guitars, which one would you like to learn how to play or even purchase?

Which are the main types of guitars?

Guitars can be categorized into either acoustic or electric. Further, guitars can be classified into falling under sub-sections depending on their hardware features, the number of strings, and body shape.

Electric guitars can be split into different groups depending on styles and features. Overall, the best type of guitar depends on what sound you want to produce and the kind of music you want to play.

The best type of guitar for a beginner?

We all have varying musical preferences; thus, the best guitar for a beginner is the one that you enjoy playing. It is imperative to comprehend that music sounds good on a particular kind of guitar. Acoustic music can’t sound good on an electric guitar.

Which is the most accessible type of guitar to learn?

Nylon string guitars are easy to play. Nylon strings feature low string tension that makes it easier on your fingers. Depending on the type of music you want to play, find the type of guitar that suits your genre.

What is a four-string guitar?

They are commonly known as tenor guitars. In most cases, they are bass guitars.