Have you come across the story of the psychiatrist who used to play the flute for his patients? The health professional used this musical device to help relieve stress and well as grab their attention. As the fingers opened and closed the holes, did the pitches vary, making the sound therapeutic for his clients?

The flute can be regarded as one of the oldest musical instruments played mainly by men, 50-70 years old, and the music industry has immensely evolved; hence, you can come across flute players as young as ten years. If you find this musical instrument worth practicing and would like to learn beginner’s basics, check it out below.

Contents show
Types
Alto flute
Piccolo flute
The concert flute
The bass flute
Baroque flute
The bansuri flute
The shinobue flute
The dizi flute
Other types of flutes include
History
Where to buy it
Frequently asked questions about flutes
How many sizes of flutes are there?
How do you clean a flute ?
How do you hold a flute?
Why does a flute tarnish?
What’s the difference between open hole and closed flute?
When was the flute invented?
How do you produce good sound from a flute?
What is it used for? 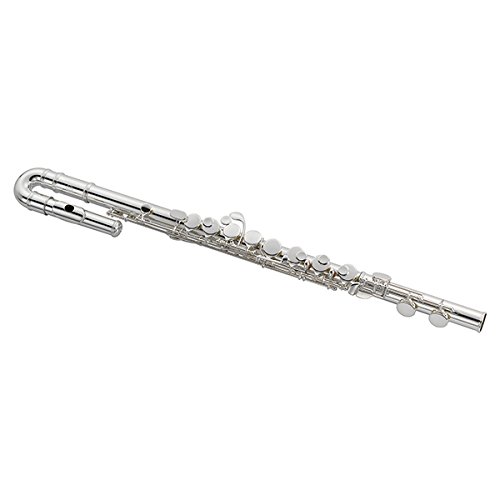 The alto flute is the best beginner flute to start with; this is because of its flexibility, making it adaptable. They are made of silver, gold, copper-nickel, and granadilla.

When purchasing an alto flute, checking on the type of metal it is made with is very important; this is what determines the sound quality.

A handcrafted head joint would be the best for use; this is what coordinates the functioning of the flute.

The lip plate is where you place your lips to blow the flute; they exist in different materials; plastic, metal, and any other material of your liking.

The foot joint, located on the right side of the flute, allows the player to change pitches.

Since the alto flute is mainly used in worship and schools, choosing one with a quality of sound should be thoroughly assessed.

It takes more air, enabling it to produce a rich tone.

It has a straight head joint, therefore, allowing the best intonation.

Requires replacement now and then, bumpers.

This type of flute is commonly known for being small in size, and consists of two specs only. The piccolo flutes are made of plastic, resin, brass, nickel, silver, and a variety of hardwoods. In the past, this magnificent musical instrument was made of glass, wood, or ivory.

The head joint is the most crucial part where the sound begins and is channeled.

The rest of the body is best designed to allow the player to use their fingers differently to regulate the sound.

The piccolo stand makes the flute upright and safe when it is not in use. The frames come in different types and sizes, which requires trying out the best with your flute.

It is easy to control, therefore making it easy for beginner players.

It is easy to adjust to the holes designed in the flute.

Balancing the intonation of the piccolo can be difficult for most players.

People of a high social status often use the concert flute from the most expensive metals; solid sterling silver, coin silver, or French silver. The flute is almost among the ancient used types of flutes.

The player can move slightly ahead joint to change the intonation

The body consists of sixteen tones accessible through the holes on the flute.

The foot joint consists of the keys used for producing low tones.

It is considered a versatile type of flute compared to others.

Due to the many keys that it exists with, the concert flute can be pretty challenging to play for a beginner. 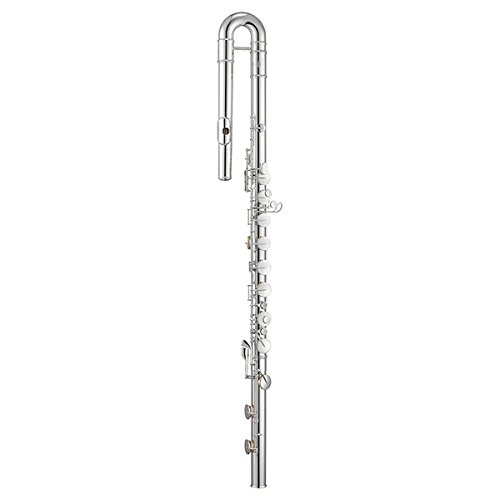 The bass flute head joints come in different shapes, curved or straight; choosing one of your likings and most likely to adapt to first should be considered.

It consists of the foot joint, which has additional keys on it.

It has open holes that allow a straightforward response from the player’s blowing.

A flute clutch for left-hand use.

It uses more air compared to the rest, which makes the tones slow and adaptable.

It has open holes which can be adjusted differently using the fingers.

It has a unique and high-quality sound.

It is heavy compared to the other types of flutes.

The more air used in the flute, the more moisture created, hence making it difficult to use.

This type of flute has a flexible sound, and it is designed so that the player can change from one key to another; it is made of wood. The flute has 24 keys which are distinguished as G and E, which are significant and minor.

It consists of six open holes

Divided into three or four joints

It has a spot at the end which is cone-shaped.

It is easy to play compared to the modern types of flute.

The flute is favorable to the surroundings, which makes you worry less about humidity.

It can be easily adaptable to their most-used educational instrument.

Blends well when played with other types of musical instruments

This type of flute is made of hollow bamboo; the material has been used to make other proper musical instruments. It was used mainly for traditional dances in the past, compared to the different flutes, and it has no keys. It is played horizontally like the western flute.

It has six or seven holes whose size is determined by the pitch that the player requires for their sound. It exists in two varieties; transverse and fipple.

Therefore, the bamboo type of material is favorable for all weather conditions, making it easy to make and maintain the flute.

It does not require many types of modifications compared to other kinds of flutes.

It does not have different flutes to choose from; this makes it difficult for the player to stick to a design that they do not feel comfortable with.

Just like the bansuri flute, the shinobue is side-blown and primarily used for informal events. The flute produces a high-pitched sound which makes it favorable for use with a large audience. Most varieties of shinobue flutes are made of bamboo.

It comprises three parts; the head joint, the middle part, and the foot joint.

The mouthpiece is easily detachable for the user.

The use of a lot of air may be discouraging, especially for a beginner.

The dizi flute is made of bamboo with low tones and would be best for use, especially when expressing soft moods. It is held horizontally and also side-blown.

It is made of three parts, which entirely divides it and makes it easy for the player to produce sound effects.

It has six finger holes that are spaced to the player’s liking.

It requires a soft breath, which makes it accommodating to the user.

Other types of flutes include

The flute is one of the instruments used in the past; despite the many modifications made to it, it stands out as one of the best instruments. Players use the standard methods of playing the flute, which is horizontally and vertically.

Where to buy it

It is recommended for a flute player to purchase the flute online because there is a wide range of collections to compare their reviews before purchase. Before acquiring one, it is essential to check the functioning of all specs and inquire about any parts that require replacement.

How many sizes of flutes are there?

Flutes do not come in specific sizes; the player should have the head joint modified to their shape and extent. It is important to note that the modifications you make determine the sound quality.

How do you clean a flute ?

A soft and dry cloth should be used to wipe off the moisture. It is recommended that the player not use gum or any other sticky material when playing the flute.

How do you hold a flute?

The position of holding the flute is determined by the type of flute and how the holes are designed.

Why does a flute tarnish?

Most flutes, especially those made of silver, tend to appear black after a long period of use. This is caused by exposing the material to its surroundings, whereby oxidation takes place. It may tend to lose its initial color if you use a piece of clothing that has bleach on it.

What’s the difference between open hole and closed flute?

Closed whole flutes are primarily meant for students who do not have the agility to shift their fingers when playing. The closed holes flute is intended for an experienced player who is well conversant in changing pitches. It is recommended for a beginner to start flute blowing with a whole closed flute.

When was the flute invented?

The first flute was made 30,000 years ago from a tusk. It was as long as the modern one and had three holes too.

How do you produce good sound from a flute?

One can improve the quality of sound made on the flute by developing a good sitting posture and appropriately holding the flute. Cleaning the flute Regularly and keeping it in its best condition would make it remain relevant for use.

What is it used for?

The flute is a musical instrument that is used in films and musical bands. The ability to fully control it using the mouth makes it favorable for use in different fields. The flute is also used by all genders and all ages of players interested in its application.