The yoyo toy has been around for years, captivating children and adults alike. This toy is simple yet can be challenging to master some technical tricks and stunts. Because the yoyo has been so popular throughout the years, many other toys have been developed that hold the attention of young children and adults in a similar way. Below, let’s look at some identical style toys to the yoyo and explain their similarities and differences to the yoyo toy.

Because the yoyo has been around for years and is a popular toy for kids and adults alike, it has prompted the creation of several other classic skill toys. Although not all the toys are identical to a yoyo, several have a skill component that will intrigue people who have already mastered the yoyo. Below, let’s look at some toys like a yoyo similar in style and design.

Very similar to a yoyo, the diabolo toy consists of two cups attached to an axle. Users must use a string attached to two sticks to keep the toy spinning and centered around the axel. This toy is popular to play at home or has been adapted to circus and theatrical performances.

The Diabolo toy takes time and practice to master, but people who master this art will also perform several tricks. People can toss, spin, and manipulate the axle in countless ways, and some have even been able to accomplish multiple diabolo toys at once on the same string. Both children and adults enjoy playing with this fun yet challenging toy. 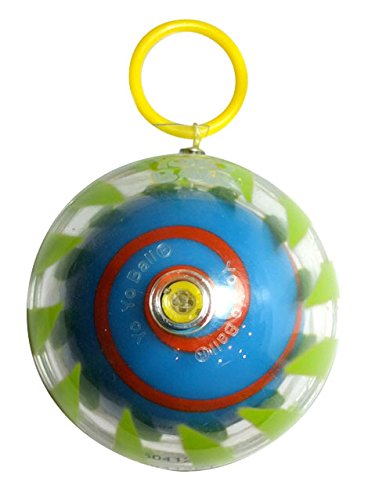 A modern response to the yoyo, the YoYo Ball was a creative solution for those that had trouble mastering the yoyo motion. The YoYo ball was created in the 1990s and featured a ball-shaped yoyo instead of the flat disc shape. Often, the Yo-Yo Ball was attached to an elastic string, compared to a traditional cloth string, that helped to retract the yoyo into place.

The stretchy string made it easier to capture the yoyo and was a good tool for people to practice the yoyo motion. Like the yoyo, the Yo-Yo Ball could still perform several skilled tricks, making this toy similar to the yoyo.

Our boys have a Gyro Wheel and enjoy it. You need to learn a rhythm for the wheel to roll up and down the rail. While it requires some skill to learn, once learned, it’s a form of fidget toy in that it’s a relaxing, repetitive toy.

Originating in Japan, the Kendama is a popular wooden skill toy with both children and adults. This toy features a ball and stick configuration, with the ball attached to the string. The user will have to toss and catch the ball on various parts of the stick, requiring practice and skill.

There are many different manipulations possible, and it takes time to master all the possible tricks and manipulations. The Kendama is addictive, as people can usually learn new tricks and motions reasonably quickly.

The top also requires some skill and if practiced, kids can learn to be more precise with placement and movement of the top.

The slinky was a popular creation that hit the toy stores in the 1940s and has been around ever since. This captivating and soothing skill toy is a cheap yet entertaining toy for kids and adults alike. To play with the slinky, a child will balance the two halves of the toy between the hands.

The toy will then move and stack from one hand to the other, creating a soothing ripple effect. The toy can be moved with skill and purpose, making it a skill toy similar to a yoyo. Users can learn several advanced slinky movements that take time and practice to learn.

An old yet classic toy, the hula hoop is the perfect toy for outdoor spaces. Users will have to balance the hoop around their waist and keep the hoop in place by skillfully moving their bodies. Most people can only make a simple hula hoop motion around the waist, but this skill toy can expand to keeping the toy in place around the neck, legs, or arms.

Professionals have even attempted to use multiple hula hoops at once, keeping all the hoops spinning simultaneously. The hula hoop is a cheap yet entertaining skill toy similar to the yoyo.

What Is a Skill Toy?

Skill toys are used alone by an individual, but some skill toys, like juggling and jump rope can be played with several people.

While a popular skill toy enjoyed by people of any age group, the yoyo is not alone when it comes to satisfying yet straightforward toys. There are several similar toys like a yoyo that are also considered skill toys. Understanding the differences between these toys can be confusing, so we have put together a list of frequently asked questions surrounding the yoyo and toys like the yoyo.

Hopefully, with the correct information, you will find the best toy like a yoyo for your needs and interests.

What kind of toy is yoyo?

The yoyo is considered a skill toy, requiring practice and hand-eye coordination to master the several tricks and manipulations possible truly. The yoyo is an old toy that has been around since 500 BC. Of course, the yoyo has gone through several evolutions, and today the yoyo is usually made of wood or plastic discs connected with an axle.

A cloth string attaches to the axle and allows the user to perform tricks with the toy.

How do you play with a yoyo?

There are many ways a person can play with a yoyo, but the traditional movement is simply to allow the coiled yoyo to drop from your hand. When the yoyo hits the bottom of the string, the user jerks his or her hand, recalling the plastic or wood disc. This motion can be repeated several times.

Of course, as the user becomes more skilled and confident, it is possible to do any number of yoyo tricks and manipulations.

Although the yoyo was created long before fidget toys were invented, the yoyo can be considered a fidget toy. This toy has a repetitive and mindless motion that can easily allow a person prone to fidgeting to focus on the task at hand while mindlessly spinning a yoyo. The yoyo is also appropriate for people of all ages, making it a versatile and easy fidget toy.

What is the easiest yoyo trick?

You can perform several possible tricks with a yoyo, and people can spend their lives mastering all the possible manipulations. One of the easiest tricks a person can learn aside from the basic yoyo motion is a trick called “walk the dog.” During this trick, the yoyo is extended to the full length of the string and then allowed to spin while just barely touching the ground.

The spinning motion of the yoyo will propel the toy forward, appearing to “walk” across the floor. This trick is a famous and rather impressive move for beginners to learn because it is relatively easy to perform.