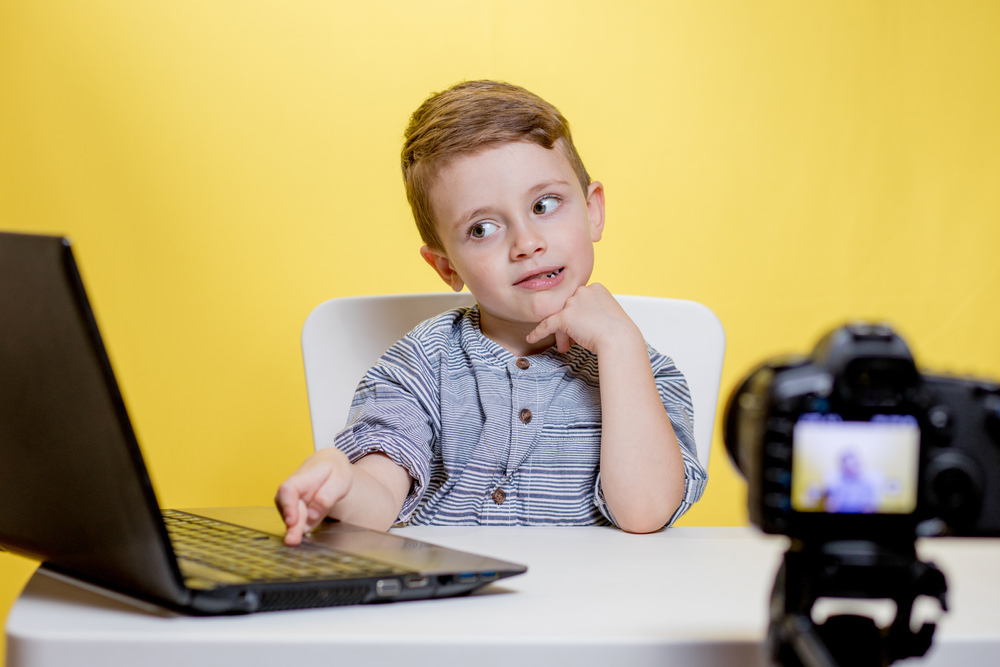 Short answer:  With the right restrictions and settings, creating a YouTube channel for kids is a great project.

It doesn’t take long for kids to find YouTube these days.

I’ve never been a big YouTube watcher, but kids love it.

My sons have their favorite channels. They subscribe. They’re totally into YouTube.  They actually learn a ton.

Before long, they started seeing videos on how to start YouTube channels and of course learning how much YouTubers make which really got their attention.

Naturally what followed was “hey Dad, can I start a YouTube channel?”  He was 7 years old at the time.

I immediately said “sure thing” and within a day my oldest had his channel set up.  A couple of years later, his younger brother, now 6 years old, also wanted a YouTube channel. Again, I immediately agreed and set one up for him.

Why did I agree to create a YouTube channel for my young sons?  What are the benefits?

I didn’t hesitate.  I thought it a great project for our kids.  It’s one thing to watch videos but another thing to plan, create and publish them.  Talk about a great long-term project for kids.

Contents show
What kind of videos do they make?
We let them do it on their own
YouTube channel restrictions – comments turned off
Other technical setup considerations and restrictions
Gmail account
No personal information / faces
Do their YouTube channels make money?
Builds confidence

What kind of videos do they make?

Since we don’t permit them to show their faces, they primarily make video screen share videos or videos of nature in the backyard or the forest near us.

Both of our sons are into Minecraft big time. They watch the Minecraft videos so that’s what they like making.  With iPads it’s so simple to do… just play the game and record the screen.  There’s a built-in mic that does a decent job.  We’re okay with them narrating/talking on the videos.

It’s fun to watch them because even at such a young age they pick up techniques they see on the videos they watch.  For example, our youngest always kicks off his videos with an enthusiastic “hey guys” as so many do.  It’s hilarious.

We also have a GoPro which we need to start using for videos as well. Both sons ski and mountain bike which makes for great video footage.  That’s something I would need to assist them with and hope to get going with that next ski season.

We let them do it on their own

As a publisher of websites and several YouTube channels, it’s tempting for me to get involved to help them make better videos but I resist the temptation.  That would take the fun out of it.  If they asked for help or wanted to start learning how to edit properly, I’m happy to help but until then, I leave them to their own devices.  It’s a huge learning curve and more importantly, I want it to remain a fun project for them.  If I get involved telling them what to do, that would take the fun out of it.  It would then seem like a school project.

We turned commenting off on their channels because people can be rude and there’s no need for our kids to deal with rude people.  I’m actually really gung ho about our kids creating videos and publishing them but they don’t need to be exposed to the uglier side of YouTube.   There will be plenty of time for that when they’re older if they’re still into it.

Other technical setup considerations and restrictions

To date, my wife and I have not posted photos of our kids’ faces on the Web, including social media.  We’re not big social media users so it wasn’t a problem.  We figured that should be their decision when they’re older.  We’re definitely in the minority here because it seems most parents post photos of their kids.  It’s not a huge deal for us but since we don’t really use social media, it’s not a big deal.  Instead, we have WhatsApp groups where we post photos… this way family and friends see the photos in a more controlled manner.  That said, if a parent hosting a birthday party posted a photo with our kids online, we wouldn’t care.

When it comes to our kids’ videos, we’re good with them publishing videos as long as they don’t show their faces and not mention their last names.  Their channel titles or information do not reveal anything about them either.

Not yet. YouTube requires a channel to acquire 1,000 subscribers and 4,000 viewed hours before ads can be turned on and be displayed on videos.

When our kids’ channels qualify, I will have no problem monetizing their channels with YouTube ads for them.  Who knows, maybe it turns into a good little income for them in their teens… it beats working some minimum wage job.  After all, my entire business is publishing in a variety of capacities on the Web… there’s no harm in them getting a start early.

I suspect I’d be as excited as them when their videos start earning ad revenue.

Instead of merely being an audience member, letting kids have and create a YouTube channel turns them into participants on a platform they love.  They also gain confidence in that what seems difficult, isn’t all the difficult.  A YouTube channel could evolve into becoming an adept video creator, editor or perhaps into coding or other avenues involving the Web and/or other pursuits.

All in all, we’re very supportive of our kids having and building up their own YouTube channels.  With the proper restrictions and controls in place, their privacy is protected while they enjoy all the benefits of being a creator on a platform they love.